What exactly is an entry-level 10 meter single stroke target pistol? Well, the answer depends upon who you ask and what period of time you’re  asking about. Some 30 years ago, the answer was quite different than it is today. And notice that I didn’t use the word “pneumatic.” Back in the 1980s, Feinwerkbau was one of the most respected names in 10 meter air pistols with models like the FWB 65 (introduced back in 1965 and manufactured until 2001), the Model 80, which added stacking barrel weights and an improved adjustable trigger mechanism, and Model 90, which used an electronic trigger. These were side-cocking, recoilless, spring-piston designs for competitive shooting. Feinwerkbau rifles and pistols were the championship airguns in International Shooting Sports Foundation (ISSF) competition and the FWB Model 65 pretty much ruled air pistol competition for 30 years.[1] Today, FWB’s precharged pneumatic (PCP) pistols are the standard bearers.

To put this in financial perspective, an FWB Model 65 MK I or MK II had a retail price in the late 1990s of $1,070 and the Model 80, which was discontinued in 1983, had sold for $625. They were expensive. But if Feinwerkbau was the Mercedes-Benz (they’re German guns, can’t say Rolls-Royce, now can you?), of 10 meter competition air pistols, what was an entry-level gun in the 1980s? It was, and still is, the Beeman P1 made by Weihrauch, which manufactures the HW 75.

Beeman was the U.S. importer and marketer for both Weihrauch and Feinwerkbau. The P1 is still the king of spring piston 10 meter pistols today, but single stroke pneumatics, developed by Walther, began to change the game. In the 1980s Feinwerkbau introduced the Model 100, an under lever cocking pneumatic design, but like the spring piston models, it too, demanded a high price. Discontinued in 1992 the Model 100 sold for $1,100. When I was working on the First Edition Blue Book of Airguns in 2001, I wanted a Model 103 (but it was too expensive at $1,555). Looking back, I wish I had bought one. The 103 was discontinued in 2008 and with it, FWB single stroke pneumatics. Today’s Feinwerkbau precharged pneumatic competition model, the PX8, retails for $2,400. Seems you never quite catch up, but when you put this little snippet of history into perspective, guns like the Chiappa FAS 6004 are a relative bargain today. No Feinwerkbau, but as a 10 meter entry-level single stroke pneumatic (as opposed to today’s PCP competition level pistols), it is almost in a class of its own.

Out of the box, I like the trigger pull on the FAS so I am leaving it at the factory setting of 1 pound, 5.7 ounces, but shortened the take up (screw No. 2 at the top of the trigger) from 0.125 inches to 0.095 inches. I left the drop points at factory settings.

The first thing I discovered shooting the chronograph tests is that the FAS 6004 does not like alloy pellets. Too many failures to fire (pellet stays in the chamber), so I set the Sig Sauer Match Ballistic Alloy and H&N Sport Match Green aside. Out of my entire test with Meisterkugeln Professional Line 7.0 gr., RWS R10 Match 7.0 gr., and Air Venturi 7.48 gr. lead wadcutters, there were zero failures to fire. The pellets are easy to load. Just use a finger tip to make sure they are seated properly, they should sit flush at the rim of the chamber.

The second thing I learned is a correction to my previous statement about the adjustable rear sight, the elevation screw does have detents you can feel as it is dialed up or down; they are not the fine detents you have with the HW 75 but they are good enough to count clicks. It took me about a dozen shots to dial in the Meisterkugeln at 10 meters with several increases in elevation (the gun came with the rear sight dialed all the way down), and several adjustments in windage, but the FAS still had plenty of leeway for elevation and windage adjustments. I used a nickel as my adjustment tool, the notch in the sight screws is a nickel’s worth, but be careful not to scratch the finish. I rubbed a spot in the base of elevation screw channel. Easy to fix with a touch of cold blue if a little scratch is bothersome. It is and I did.

In the instruction manual the Chiappa FAS 6004 is rated at 330 fps (although Pyramyd Air has maximum velocity at 400 fps). The reality is somewhere in the middle. With the Meisterkugeln my average velocity was a very consistent 355 fps. The RWS R10 Match clocked 353 fps, again very consistent with no more than a 2 fps deviation between shots. The slightly heavier Air Venturi wadcutters actually were 1 fps faster on average than the RWS R10, with an average velocity of 354 fps. It is safe to say the FAS shoots at an average of 350 fps.

I know I have a prejudice toward Meisterkugeln but for good reason, I tend to shoot better with them most of the time. With the FAS 6004 my best 5-shot group measured 0.59 inches center to center in one almost solid tear through the center of the 10 and bullseye.

With RWS R10, my best five were at 0.75 inches and a little more clearly defined (I moved the target to a different place on the baffle box that wasn’t as shot up), and Air Venturi delivered five at 0.625 inches.

In comparison with the Air Venturi V10 pistol and Weihrauch HW 75, my best 5-shot group was 0.5 inches with the V10; just a fraction of an inch better than the FAS, but I attribute most differences that small to me and not the pistols.

The HW 75 also gave me a best 5-round group measuring 0.625 inches, so the FAS is right in the ballpark for velocity and accuracy with its single stroke pneumatic contemporaries. If you shoot like me, you’re still in the minor leagues, but the FAS has a great deal of potential! If you seriously want to shoot 10 meter air pistol, the old FAS 604 single stroke pneumatic in its latest Chiappa 6004 iteration remains one of the best choices around. 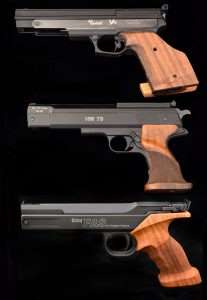