Today we learn how accurate the Benjamin 700 multi-pump repeating BB gun is. And we will learn a lot more than that. Let’s go!

Some of you know how I harp on calling a BB gun a BB caliber and NOT .177/4.5mm. Because it’s not! A steel BBs is 0.171- to 0.1735-inches in diameter. It may not matter to people buying one BB gun at a discount store, but to someone like me who has to shoot oddball new and old airguns from all over the world, it makes a big difference.

The Benjamin promotional pamphlet from the 1930s says these guns (the model 600, 700 and 300) use steel Air Rifle Shot of 0.175-inches in diameter. There’s just one problem with that. As far as I can tell, nobody ever made steel Air Rifle Shot in anything but 0.171-0.1735-inches. I wondered if it was possible that the Benjamin writers of that pamphlet were as cavalier back in the 1930s as BB manufacturers are today. Did they really want us to use Air Rifle Shot that is 0.171 to 0.1735-inches in diameter and not LEAD Air Rifle Shot that is 0.175-inches? They did emphasize not using lead balls in these guns.

First, I measured some genuine vintage Benjamin Air Rifle Shot and found them to measure 0.172 to 0.1735-inches in diameter. Second, I tried a real 0.175-inch LEAD Air Rifle Shot in the 700 and got it jammed in the feed mechanism. That was why I had to change this past Monday’s blog. Fortunately for me lead is soft and I was able to clear the jam by tapping on the bolt lightly until the lead ball sheared and could be chambered. I then shot it out and the gun was cleared. 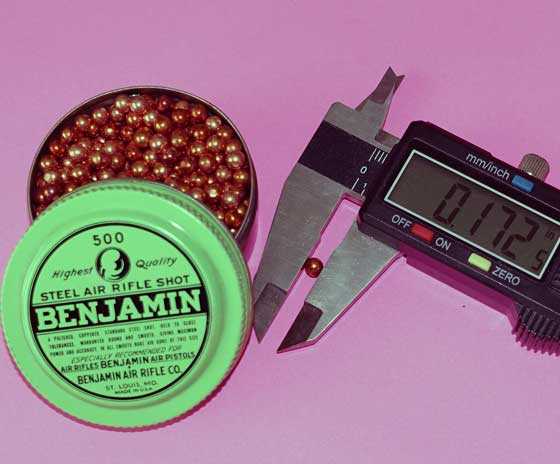 Sorta makes me want to pull my hair out — if I had any to pull!

So, Pilgrim, the Benjamin 700 and any other Benjamin BB repeater from that era uses a STEEL BB sized 0.171 to 0.173-inches in diameter. That allowed me to conduct today’s accuracy test — without a single mis-feed!

You guys wanted to see what it looks like to fill the gun, so I took a short video for you. I would like to thank reader Kevin Gallagher for editing this video and getting it ready for You Tube.

I then shot 5-shot groups from 10 meters, pumping the gun after every shot. After watching me pump the gun, I hope you appreciate why I shot just 5-shot groups this time. Each time I shot I had to get up from the bench and pump the gun like you see in the video. Then back to the bag and settle in again.

Before the test started I had pumped the gun 5 times, then three pumps after each shot — until that stopped working. I will get into that in a minute.

I shot the gun off a sandbag rest and naturally used the open sights that came on the gun. I had no idea where these sights would be, but since they aren’t adjustable it didn’t make much difference. I just hoped they could get me on the paper.

First up were Daisy Premium Grade BBs. I had hoped to just begin shooting groups, but the sights were hitting several inches below the aim point at 10 meters, so I used the first 4 shots to figure things out.

I finally settled on holding the front sight very high in the rear notch. That elevated the point of impact to an acceptable level, though it was still too low. The five BBs landed in a horizontal group measuring 1.454-inches between centers. Given how I was guesstimating during sighting, I had expected a vertical group rather than a horizontal one. 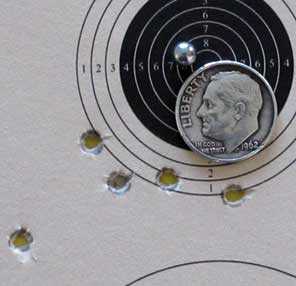 I was actually surprised the 700 even hit close to the bull at which I was aiming. I didn’t have high hopes for it going into the test. Maybe this wasn’t such a bad BB gun after all! Notice how clean the BB holes are. The 700 has some velocity that helps punch cleaner holes.

At this point I noticed the gun was getting more air with every shot and refill. The pumps were getting harder and harder, and the pump handle started coming back out of the gun after the fill was complete. So I tried pumping just twice between shots to get it back in the groove. That proved to be the right way to go. So, from this point on I pumped two times between shots.

Naturally Hornady Black Diamonds were on my list to try. Like Mighty Mouse, I reckoned they could save the day. And they did — sort of. Five of them went into 1.318-inches, but the interesting thing was these shots landed higher on the paper — well, most of them did. And the last three shots went into that small almost-cloverleaf at the top that measures 0.361-inches between centers. That was encouraging! 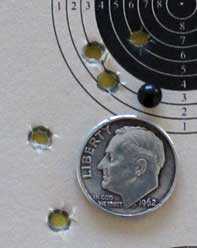 Getting used to the gun

At this point in the test I found myself starting to understand the Benjamin’s ways and to feel it better. I could “feel” when it was pumped to the right pressure. And I knew that with time I would get to be a very good shot with this gun, as I learned its quirks. My next target will show what I’m struggling to say.

The last BB I tested was the Daisy Avanti Match Grade shot. I knew they were slightly larger than the BBs that had gone before and I thought that would help with the accuracy.

And, indeed, it did help! This time the Benjamin 700 put 5 BBs in a group at 10 meters that measures 0.867-inches between centers. Not only is this a good group, I got the feeling that the more I shot the gun the better it could get. Remember, I am interpolating that front sight to get the shots to hit up by the target. If I had a good repeatable sight picture imagine what I could do. 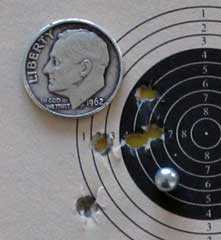 Five Daisy Avanti Match Grade BBs went into 0.867-inches at 10 meters. This is a good group.

Let’s get honest for a moment. I am shooting a BB repeater that I’m pumping a different number of strokes between shots. I am guessing where the front sight goes every time I shoot. The gun I am shooting is 80+ years old. Oh, and then there is this — I’m shooting a BB gun at 10 meters instead of five! Some of you thought I forgot about that, didn’t you?

This old Benjamin 700 has truly risen to the occasion. It’s quirky, retro and classic in a crusty, dusty sort of way, but this old girl can shoot. I bought her at an airgun show for $95 and then spent $168 getting her back up and running again. Was it worth it? I think so! 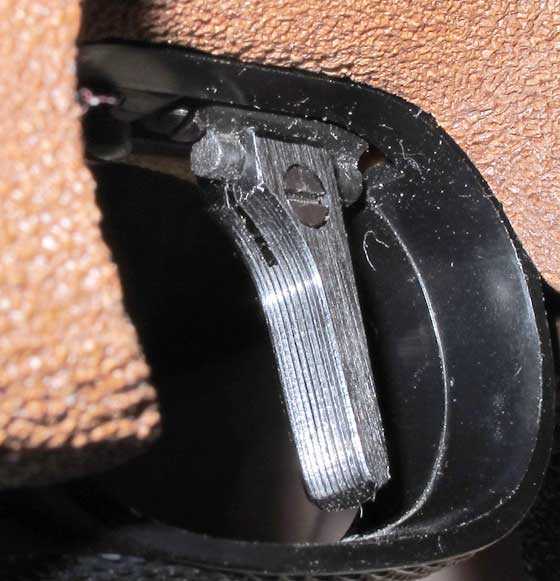 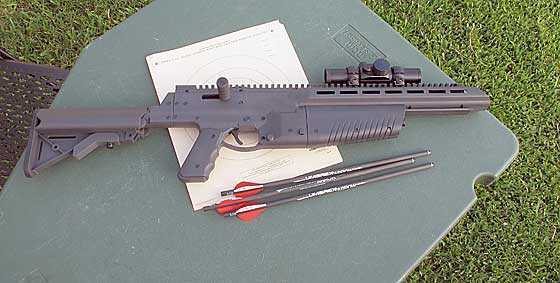