When Crosman began making air rifles in 1923, they quickly settled on an underlever design that was to be in the inventory for the next 25+ years. From 1925 into the early 1950s, the Crosman .22 caliber model 101 or “Silent,” as it’s sometimes called in advertising, was a popular pump rifle.

No model number on the gun
The 101 is a strange bird. First…there is no model designation on the gun. Second…because most parts interchange, you will find all sorts of parts variations on the guns today. Finding an original 101 is as hard as finding an original Garand rifle from World War II. And, it has the same problem: How can you prove that it’s original?

The earliest successful underlever design
Today, we take the underlever pump for granted, but until Crosman invented it in 1924, people pumped their guns with a bicycle pump rod that extended from the front of the gun. Even Crosman’s first model is a front pumper. The second model introduced the underlever that’s been the standard ever since. It’s so “right” that when companies like Daystate and Sharp fiddle with it by using a sidelever, they only do themselves harm. Apparently, the underlever is the one right way to pump an airgun! 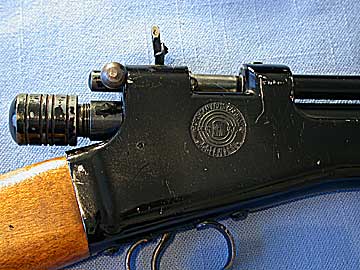 The receiver looks vintage, which it is, of course. Notice that the cocking knob is unscrewed several turns to take pressure off the valve. The rifle can store air indefinitely this way.

Cocking and loading are separate
One interesting quirk of the 101 is that the bolt only opens the breech to accept the pellet. To cock the rifle, a separate cocking knob must be pulled back. The gun must be cocked or it will not accept a pump – unless you follow this tip: Partly unscrew the cocking knob so the mainspring is not pressing against the exhaust valve, and you can pump the gun uncocked. This trick is also good for leaving two pumps of air in the gun between shooting sessions to keep the valve free from dirt. After you ride the cocking handle down – following the two pumps of air, unscrew the knob and the gun will remain sealed for years!

Several subtle design changes
The guns may have looked the same, but they didn’t have the same valves. The early valves were known as troublemakers, and repair stations quickly replaced them as soon as a better design became available. Barrels and pump tubes can be made of either brass or steel. Because of the ease of parts swapping, there is no sure way to know when one type ended and another began. Rear sights vary a lot, and the newest ones are the best, in a strange twist of fate. They are all aperture-type, which makes for greater precision.

The “clickless” rubber pump handle
In the 1940s, Crosman introduced a pump handle that was supposed to not click when it banged against the pump tube. As this material dried out over the years, it became as hard as any hardwood and clicks just as loud! The rubber pump handle is an ugly red color that really looks sad on an otherwise attractive airgun.

The gun shown here didn’t hold air when I bought it for $50 at an airgun show. I sent it to Dave Gunter, who resealed it and made the valve more efficient and gave me more velocity. I get about 710 f.p.s. with .22 Premiers on eight pumps. That’s cookin’ for a vintage multi-pump!

I still shoot my rifle more than many of my other pellet guns. Perhaps that says it best – this is one sweet air rifle.