Today, we’ll learn how to move the CO2 from the large bulk tank to a smaller tank or to the gun, itself.

It takes an adapter
To connect anything to a 20-lb. CO2 tank requires an adapter to connect the big tank to whatever it fills. The threads on the big tank are always the same 1/2″ National Pipe Taper threads (NPT). The threads on the tank or gun you are filling can be anything, including metric, as many of these guns are now coming from outside the U.S. Twenty-five years ago, adapters weren’t much of a problem. The Crosman model 190 gas tank was the most common small tank that needed to be filled, and it has 1/8″ NPT threads. The guns it filled had female threads to match the tank, so bulk-filling was a pretty straightforward process. 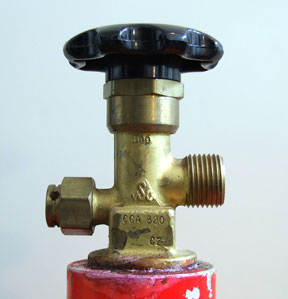 Gas comes out on the threaded side. The other side houses a safety burst disk that prevents the tank from becoming a bomb if the internal pressure gets too high. 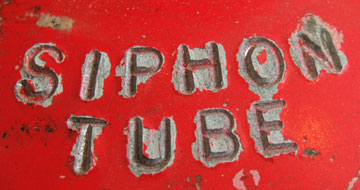 When the siphon tube was installed, they marked it on the tank so everyone would know in the future – because this tank now operates in the reverse of a tank without the tube.

Little standardization!
Outside the U.S., all sorts of other standards prevail, and guns made in other countries use many thread patterns that are not typically found in this country. Your first duty when purchasing a bulk-fill airgun is to ascertain where the adapter will come from to fit that gun or its tank to an American bulk CO2 tank. You have to use an American-approved bulk tank because they are the only tanks for which our DOT has technical data. As a result, they’re the only tanks a filling station may legally fill. This is not a problem, as there are an abundance of bulk tanks, but you always need to think about the adapter situation. 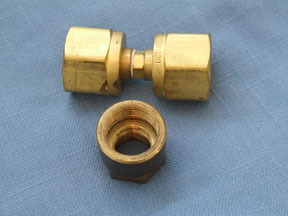 Adapters come in all shapes and sizes. One side fits the large bulk tank and the other fits either a small bulk tank or the gun itself.

Adapter seals
The adapter that attaches to the bulk tank has some kind of gas seal on the tank side and perhaps a second seal on the small tank or gun side. These may be o-rings or flat seals, and they have to work because CO2 is under 850 to 900 psi at room temperature. Treat these seals with the same care as your gun seals. They need a light coating of diver’s silicone to maintain their supple sealing ability, and they need to be kept very clean.

Make the connection
Although I used to fill a number of different tanks and guns, I usually shot the same type of gun at any one time, so the adapter for that gun was left on the bulk tank. When making the connection of the tank or gun to be filled, it is important to remember that the adapter seals do the sealing job – NOT the tightness of the connection! Remembering this will preserve the longevity of your adapter seals as long as possible. In twelve years of bulk-filling with nine different adapters, I have never had a single seal fail.

Open the valve!
When you fill from a scuba tank, you open the valve very slowly to keep from overheating the seals from the sudden compression of the air. With bulk CO2, it’s just the opposite. The seals and everything else will cool down during the fill. Therefore, you can make the fill very quickly. I can fill an empty 10-oz. bulk tank in about 20-25 seconds. During this period, the first liquid that enters the empty tank flashes to gas, because the pressure in the empty tank is relatively low. As the liquid changes to gas inside the tank being filled, it cools that tank, lowering the pressure of the CO2 gas inside (remember, CO2 pressure is determined by temperature). Because the bulk tank you are filling from has been sitting in a room for a long time, it has assumed something close to the ambient temperature of that room, so its internal pressure will be higher than the pressure of the gas that’s now inside the tank being filled. As a result, liquid CO2 will continue to flow into the smaller tank. You’ll notice that the outside of the tank being filled will frost up and then melt into a heavy coating of dew. This happens in just a few seconds, and the relative humidity determines the extent of this phenomenon.

Weighing the small tank to be filled
Because there is really no simple way to control how much CO2 enters the small tank during filling, the safe procedure is to weigh the small tank after the fill. Therefore, you MUST know the empty weight of every small CO2 tank you own! By law, a new gun comes to you with an empty gas tank, so that is the time to weigh that tank. Don’t take anyone’s word for how much it weighs until you weigh it on YOUR scale! 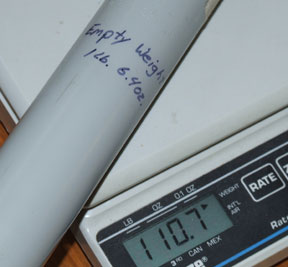 What if you overfill?
An overfill of a small gas tank can be very dangerous, though there is time to deal with it safely if you do not delay. After the fill, the small tank will be very cold, which means the CO2 inside will be at a low pressure. The tank was designed to safely contain a certain amount of CO2 within a certain temperature range. If you discover that the small tank has been overfilled, simply fill your gun from it immediately. (The tank shown in the picture is rated to hold up to 4 oz. of CO2, so it’s not overfilled. Max fill info comes with each new bulk tank.) That drains off the excess gas. You can verify the tank is now safe by weighing it again. If it is still too full, shoot the gun and refill it from the tank. If you don’t have time to do this, simply store the small tank in a freezer until you can get to it again. The object is the keep the tank’s temperature as low as possible until you can get the fill weight down into the recommended range.

Sound too technical?
Bulk-filling CO2 guns is not rocket science. However, you are working with highly compressed gas and there are safety procedures that must be followed. The same is true for filling pneumatic guns from a scuba tank. I have tried to give you as much detail as possible, which I don’t believe you’ll find anywhere else. Even the owner’s manuals of modern bulk CO2 guns don’t go into the detail I have here, but these are things you need to know.

I need one more post to cover all the details I want to pass along, then I’ll wait for your questions to tell me if there is anything else we need to look at. You may be a little confused about how “full” to fill the small tank you’re transferring to. Don’t worry, it’s almost no-brainer. However, I want to spend a little time talking about it, because there are safety considerations.

Why are some PCPs so darned expensive?