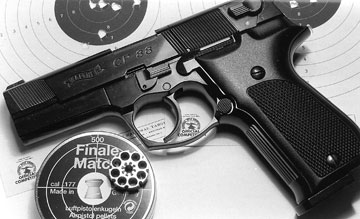 Walther’s CP 88 is as realistic as airguns get.

There is no denying that Umarex has made its mark in the airgun world. For those who aren’t aware, Umarex is the company that owns Walther. They bought a 90 percent interest in 1993, and the world wondered what would happen to the veteran gunmaker. This evening, March 14, 2006, in Ulm, Germany, Umarex celebrates the 120th anniversary of Walther – which is stronger now than ever. One reason for their newfound strength is a panoply of realistic airguns that started flowing from Germany in 1996 with the introduction of the Walther CP88!

Drop-dead realistic!
I’ll never forget when I first picked up a CP88. It looked great, but it FELT even better – and that feel is the secret of the success of all these airguns. They feel exactly like the firearms they copy. EXACTLY! The CP88 with the 4″ barrel is a copy of Walther’s P88 Compact 9mm pocket pistol. Though the exterior of the pistol is made of a low-temperature casting metal (pot metal) Umarex has engineered a beautiful finish that resembles blued steel. There are no voids visible, and the corners and edges are as sharp as if they had been milled. The weight is within fractions of an ounce of the firearm’s weight, so you lose nothing in the sensory department.

The slide opens to insert the 8-shot magazine. Indexing is automatic.

An 8-shot revolver
All the Umarex pellet pistols have an 8-shot revolver mechanism at their heart. The photo shows the slide open to reveal the metal 8-shot rotary magazine; this is where it is removed and inserted. One of the clever things Umarex does is locate the split in the slide in a place that’s difficult to see, so the slide looks whole to the casual observer. When the slide is closed again, the magazine indexes automatically and the gun fires a pellet with each pull of the trigger. As with all CO2 guns that fire in both modes, the CP88 is slightly faster in the single-action mode. The longer version of the pistol has a 6″ barrel that delivers more velocity, as well.

You’ll shoot it a lot!
Once you get hooked up with one of these pistols, you’ll find that you shoot it a lot more than your single-shot pistols. To help you keep up with the faster pace, there is a Diabolo Speedloader that loads seven 8-shot magazines at once! The gun comes with two magazines, and you can buy extra packages of three for a reasonable price.

Which pellets to try?
I’ve always liked the Gamo Match pellet for Umarex pistols. It’s a premium pellet, but also light enough to get all the velocity the gun has to offer. If you shoot at paper targets, this is a wadcutter that will punch round holes in the target for more accurate scoring. If you want higher velocity, you might try the Skenco type 2 synthetic skirt pellets. They are lightweight yet offer reasonable accuracy in a gun like this. I haven’t tried the new Gamo Raptors in one of these but I would assume they would be even faster.

What kind of accuracy?
Here is where the longer-barrelled gun shines. Just the extra separation of the front and rear sights makes this pistol easier to sight with precision, so it’s bound to do better at 10 yards. I get five-shot groups that measure 1-1/8″ at that distance (when I do my part). That’s with the Gamo Match pellets.

Don’t forget a holster
You’ll need a way to carry your pistol, and this tactical holster looks perfect. It has the “today” look that suits the gun so well. It fits a regular belt, because the belt keeper is adjustable – there’s nothing else to buy. 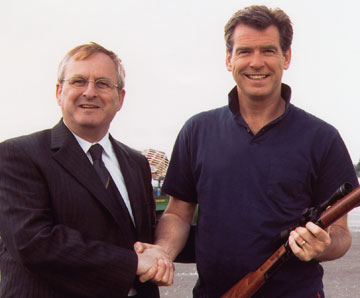 Happy birthday, Walther!
Imagine the history that’s steeped in a company like Walther. They have been in business 120 years and have seen the entire history of pistol development. They have been at the forefront of much of that history, with their famous P38, the sexy PPK carried by James Bond of the 1960s and the newer P99 that James carries today. As an airgunner, you have access to many of the world’s most classic pistol designs through the genius of Umarex. The CP 88 is just a look at one of the fine guns they offer. We have many more to discover in the days before us.

63 thoughts on “Walther CP88: the air pistol that launched Umarex in America!”