A package arrived from Germany yesterday. It contained goodies that I will use to keep you amused for the next several weeks. Like a CARE package at summer camp, I went straight to the chocolate chip cookies – the new Magnum Research Desert Eagle.

SO – how’s it hangin’?
There has been a lot of jabber about this pistol from airgunners in the UK, where it has been available for some time. The main comment heard is that the gun is too “plastic-y.” Well – what’s the deal? It IS mostly plastic on the outside, but can you say Glock? This is engineering plastic, not the blowmolded styrene of Taiwanese toys. I imagine our British cousins are not familiar with the modern synthetics used in handguns, but you can’t buy a simple Ruger 22/45 Mark III pistol and not touch plastic.

You better read the manual
When most CO2 pistols arrive, I have them through their first field test before I look to see if they sent a manual. With this pistol, however, I had to read the book from the start. Even then I didn’t get it right the first time. Like loading the first CO2 cartridge. It was obvious where it went – the hole at the bottom of the grip, and a drop of Crosman Pellgunoil on the tip goes without saying (but I said it anyway). But, when I screwed the cap tight and pulled the trigger, nothing happened. Oh, the trigger pulled and the hammer cycled like it’s supposed to, but the gun didn’t fire. So, I began experimenting with the tension on the CO2 cap. From very tight to so loose it began exhausting gas inside the grip – but no shooting.

The CO2 cartridge drops in the hole covered by the brass cap. The cap is flush with the bottom of the grip, leaving NOTHING hanging down. That was requested by many, who said it would be okay if a tool was needed to tighten the cap. The Desert Eagle comes with a separate spanner for this job.

I was so frustrated because I had followed the manual perfectly, or did I? Like a soldier caught in a minefield, I began retracing my steps exactly until I arrived at the point of putting on the safety. All manuals tell you to put on the safety when installing a new CO2 cartridge, but guess what. THIS manual doesn’t tell you to take it OFF before firing! Well, duh!

Of course, I know the gun won’t shoot with the safety on, but that didn’t stop me from having a frustrating 15-minute episode before figuring the thing out. Even with the safety on, the trigger and hammer continue to function normally. I think I won’t be the only person this happens to.

Safety off
BAM! Just what you’d expect, and the blowback action is definitely there. It’s not the bounce of the PPK/S, but more like the quick snap of a heavy .22 target pistol. The world has not had a blowback pellet pistol since Crosman stopped making the 451 way back in 1970!

Velocity, accuracy, number of shots – these are just a few of the things I haven’t told you yet. Stick around! 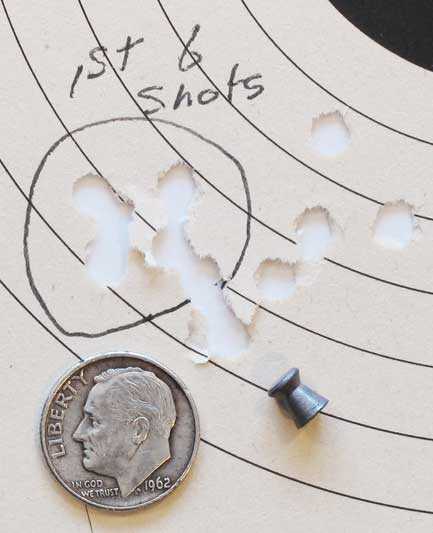