Last week, we had a question about pellet drop, and a reader answered it correctly. The question, however, prompts me to post a few ballistic facts that may be of some interest to you.

Pellet drop
Galileo demonstrated the constant acceleration of gravity by dropping two different sized balls from the Leaning Tower of Pisa. Both hit the ground at the same time. When you shoot a pellet from a barrel whose bore is parallel to the ground and drop a pellet from the same height, both pellets should hit the ground at the same instant. The pellet that was shot, hits far away from you. How far depends on how fast it was traveling and how much it slowed down from the drag on its skirt.

What a drag!
Drag slows the pellet, and both weight and aerodynamic shape fight drag. Vertical drop is a constant. Therefore, light pellets hit the ground closer to the muzzle (at a given velocity) than heavier ones, assuming the same drag. I’m not saying that heavier pellets fall at a different rate than light ones, but that they take longer to slow down. Between two pellets of the same weight and aerodynamic efficiency, the slower one hits the ground closer to the muzzle.

HOWEVER – and this is the ENTIRE POINT I’m making – the “givens” listed above are NEVER the same, so trying to have a meaningful discussion about which pellet shoots farther or falls closer to the gun is pointless and futile! Instead, get out into the field to do the actual testing. That is the only way to find out what will really happen!

Mythbusters busted!
The popular TV show Mythbusters aired a segment on a “magic bullet” of ice that was supposed to kill someone when fired from a firearm, then melt without a trace. In that segment, they said that bullets don’t stop accelerating at the end of the barrel, and they ran a high-speed film clip showing gas blowing past a bullet as it exited the muzzle of a gun. Their premise sounds good, but it’s not correct. For all intents and purposes, and with the finest test equipment available, bullets stop accelerating when they leave the muzzle. I have done thousands of chronograph tests that show a gun has higher velocity at 12 inches from the muzzle than at 24 inches. I have tested both airguns and firearms this way and they work the same.

There MAY be a short region an inch or two from the muzzle where some slight amount of additional acceleration occurs, but the amount is both too small and the effect too brief to measure by any means I have access to. The high-speed gas blowing past the exiting bullet is rapidly losing its energy, which it has been doing since the bullet was about halfway down the barrel. It may act to destabilize the bullet slightly, but it doesn’t push it any faster. Having gotten that off my chest, I still enjoy the Mythbusters and find most of what they do very creative and accurate.

Precession will blow your mind!
Precession can be described as the tendency of the spin axis of a rotating body (a pellet in flight) to twist at right angles to any external force. Stated simply…when a spinning pellet encounters a force from the right side, it will climb if it’s spinning to the right or dive if it’s spinning to the left! The force will also move the entire pellet in the direction it is applied!

So, if your right-spinning pellet encounters wind from the right, it will move UP and to the LEFT. The UP movement will be smaller than the LEFT movement, especially since the pellet is also being pulled DOWN by gravity! Please explain all the other permutations of this phenomenon to yourself at this time.

Confused? You’re not alone. This phenomenon is quite confusing, yet it affects all ballistic projectiles. 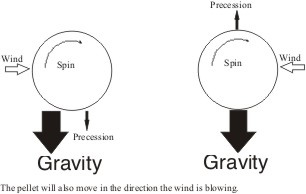 A lot of different and sometimes opposing forces act on a pellet in flight.