How to fill a precharged gun from a scuba tank

You would think a subject like this is too simple to bother with, but it’s not. Although I have done several postings on scuba tanks in the past, this is the first time I’ve discussed filling.

Only finger-tight!
A guy once asked to borrow a crescent wrench at an airgun show. He wanted it to tighten the nut that attached his fill hose to his gun (this was before quick-disconnects were popular). That’s like using an impact wrench to wind a watch! Because these filling connectors all have O-rings or other types of seals, they need to be only finger-tight.

Fill slowly
I should have guessed what was coming next. Once the adapter was torqued down, he cranked open the valve on the scuba tank and filled his gun in three seconds. I actually jumped back when he did it, which surprised him. Filling that fast is like filling a shot glass with a fire hose! I asked him if his gun reservoir felt warm, and he told me it always did after a fill. I bet! A fast fill generates so much heat from compression that it can melt the seals in your gun. His steel reservoir was too hot to hold. I wonder how long that gun will last with that kind of treatment?

Always allow at least a full minute for a fill. That’s a fill that goes from 2,000 to 3,000 psi. If you’re filling from zero, take longer. Learn how to open the scuba tank valve so the air flows out very slowly.

Keep all connections clean
Dirt is the enemy of a precharged gun because it defeats the air seals so quickly. A small particle of sand can get on a hard synthetic seal and embed itself in the material, causing an opening at the point the seal is supposed to be tight. It only takes a microscopic hole for pressurized air to leak out. All your connectors and the ports to which they attach should be kept clean. If the gun has a cover for the fill port, use it. This is especially important after lubricating a seal, because fresh grease attracts and holds dirt like a magnet.

Lubricate O-rings and seals
If you have a dry O-ring and you have to twist whatever it connects to, the O-ring can tear. The static ring on a K-valve is very forgiving because there is no lateral movement, but the O-rings on a fill probe are subject to a lot of pulling as the probe slides in and out of place. Keep them lubricated with pure silicone grease and they will last as long as possible. 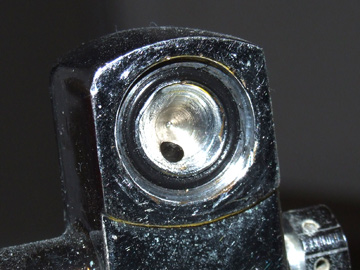 The O-ring in a scuba tank K valve is not subject to twisting forces.

This Career fill probe has two O-rings that scrape the side of the fill port each time the probe is inserted and removed. This will tear the rings unless they are lubricated. Once you grease them, keep the probe in a plastic bag when it’s not in use.
Share
327 / 4732