Making students aware of safety
How do you make a student as aware of gun safety as the instructor? You make a game of it. First, you teach the students the most basic safety rules, with the first one being Never point a gun at anything you do not intend shooting. That’s sometimes watered down to Always point a gun in a safe direction, but I have seen too many people (myself included) who cannot initially appreciate how far a bullet or pellet can reach out. That’s why I like the first way best. If you think it’s necessary, you might want to set up a few demonstrations of what it looks like when a pellet hits something. Rotten fruit is good for this, as are plastic milk jugs filled with water dyed red.

Make the students repeat the safety rules, and let THEM discuss what each rule means. To make sure every student participates in the discussion, to hold it in a setting that is as informal as possible, while still maintaining control over the class. Then, demonstrate what an infraction of the rule looks like. In the beginning, some students will get the idea right off, but some will require more processing time before they start responding to the infraction. The goal is for every shooter to respond to an unsafe act without thinking about it. For example, I have found myself shouting, “Cease fire” at airgun shows when someone dry-fires a gun indoors. I was as surprised as those around me, but the shooter got the message.

Testing without the formal structure
You can test the students on all the safety rules by committing infractions during the rest of the training. This is an old training tip, and it’s a far better method than a formal paper or memory regurgitation test. However, once again, your students will not all respond at the same speed. You’ll have a bright young girl who is as quick on the draw as Wyatt Earp, and there will be a quiet thoughtful boy who seems to be a half-second behind everyone else. You must find a way to test every student without embarrassing any of them.

Never stop testing the safety rules!
Continue to throw in a careless act from time to time during the rest of the training. The students will become so immersed in the shooting safety rules that they will surprise you someday. I have seen children shooters catching coaches and officials in unsafe acts at public events. I’ve been caught, myself. When the shooter knows the rules to that level, you have succeeded as an instructor.

Teaching shooters to use sights
This is the first lesson in training someone how to shoot. Guns are not required for this lesson, so you can even work it into a demonstration class held in a place that’s inappropriate for actual shooting! I learned this in the NRA introductory class I took almost 50 years ago, and we practiced it for three successive weeks before ever shooting a gun. As a result, all the bullets from the first-time shooters landed somewhere inside the black bullseye!

The triangulation method
This method uses a flat stick (such as a yardstick), a chair for the instructor to sit on, two cardboard boxes, a target, a piece of paper and a lead pencil. An instructor is needed for each student. First, a sturdy set of paper sights is attached to the flat stick. You can also use real sights taped to the stick, but the front sight may have to be raised up on a block to align properly. 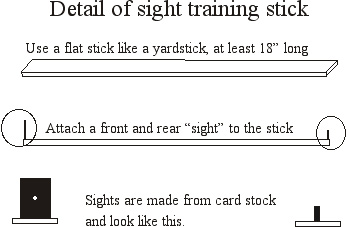 The sight trainer is simple and inexpensive to make.

Notice that we made an aperture rear sight. The shooters in formal training programs will be shooting with aperture sights, so it’s important to not confuse them during training. Also, an aperture is MUCH more precise than any other open sight.

In the next lesson, I’ll tell you how this training method works.