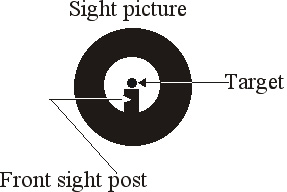 The front post is supposed to be held up halfway in the rear peep. Your eye tends to center it because the light is better at the center of the hole, but tell the student where the post is supposed to be. The bull sits atop the front post, just touching it at the bottom. This is called a 6 o’clock hold and is universally used in the target shooting world when post-and-aperture sights are employed. Some people like to leave a thin band of space between the front post and the bottom of the bull, but this is better left to the student to decide without prompting.

The triangulation exercise
The sighting stick is laid on a low box, so students can see through the aperture when they are lying down, like a prone shooter. They must not touch the stick during the exercise.

The instructor sits on a chair 30-40 feet away and directly downrange from the sighting stick. In front of him is a cardboard box taped to the floor so it cannot move. A blank sheet of white paper is taped to the side that faces the student. The instructor holds a paper target with a single bull, and a hole has been punched through the center of the bull so a lead pencil can be inserted. The instructor tells the student to sight through the sighting stick and to guide the instructor in moving the target left and right, up and down, until the correct sight picture can be seen through the sights. The student is aligning the bull with the front post in this exercise.

When the sight picture appears correct to the student, he tells the instructor to mark the target. The instructor makes a mark through the hole in the center of the bull with the pencil, then he moves the target away and they do the exercise over again. After three targets, the instructor calls the student down to examine the sheet of paper on the side of the box. 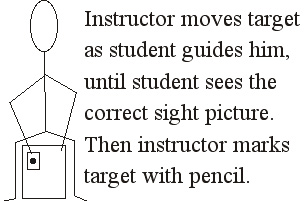 Instructor moves the target as the student directs. When the student says the sight picture looks right, the instructor marks a pencil dot through the target onto the blank paper on the box.

The goal is to have three pencil dots as close to one another as possible. The three dots should be inside a dime (17.91mm) at least, if the instructor was 40 feet from the student. Ideally, the three dots should be inside a circle the size of a pencil eraser. What this exercise illustrates is the student’s understanding of the correct sight picture, because they were able to form it three times in very close proximity each time.

It is important that neither the sighting stick nor the box in front of the instructor move during this exercise, because they are the fixed standards. We are training the student to sight correctly without having a rifle to manage at the same time. The next step in training will be the first shooting exercise, so do not progress beyond triangulation until the student has demonstrated proficiency.