We are discussing the types of open sights encountered on sporting airguns and firearms.

Post and bead
This has been a popular sporting sight for more than a century. The front sight is a blade with a small bead on top. The rear sight is a u-shaped notch. On some guns, a v-shape is possible, but that means whoever selected the rear sight was not familiar with this type. 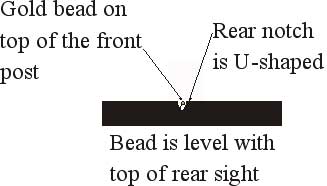 The bead on top of a post has been a popular sporting front sight for a long time – and still is today. The bead represents where the bullet will go.

I have never cared for this sight. I find it too arbitrary for accuracy beyond simple plinking, and I find that the bead is almost never lighted well enough to use it the way it was intended. The recent addition of fiber optics has made an improvement to the second shortcoming, but the sight is still too imprecise for me. On the other hand, it is found on more guns than any other sight.

Barleycorn
Another very popular sight that preceded the post and bead. This is a v-shaped front sight with an inverted “v” rear notch. It is even seen on military rifles, including the venerated M98 Mauser. 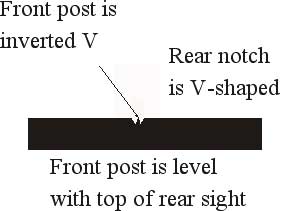 The barleycorn is very popular for both military and sporting rifles.

Post and notch
I don’t know when the post-and-notch sight was first invented, but the first use seems to be in the latter two decades of the 19th century. By that time, the blade and notch had evolved into an adjustable sight that was quite precise, and the square post was probably only seen as a good sight to use on round bullseyes. In fact, it was just one of many sight types that emerged as the first true need for long-range shooting emerged during the buffalo hunting days. When that brief period was over, long-range shooting at targets took its place, and the square front post insert in a globe front sight (with aperture rear) was popular. But, the use of a square front post with a square rear notch must date from sometime in the 20th century. 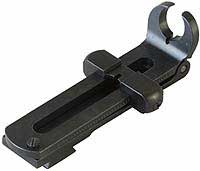 Buckhorn sight is just a style, not a different sight. It can be either post and bead or barleycorn.