The series on teaching people to shoot drew a comment about safety yesterday. It seems a reader has a friend who uses his riflescope as a spotting scope at a firing range. The problem is, he sits BEHIND the shooters when he does it! In Germany, hunters are taught to use binoculars to scan for game. You NEVER scan through your riflescope, for fear of pointing a loaded gun at another hunter. In the two years I hunted tin Germany, only one accident occurred – a visiting French hunter killed another hunter when he shot into bushes after seeing them rustle.

Airgun shows are lax
At EVERY airgun show I have ever attended, there is always a lot of dry firing going on. Once, a man picked a Daisy No. 25 pump up from my table and cocked it without asking. I asked him what he intended to do, since it is impossible to decock this model BB gun. I was prepared to take the gun to a safe place outside the show hall and discharge it when he smiled and said, “No problem.” He then put the muzzle on his shoe and shot himself in the toe! Was the gun loaded? Of course! Did he bother to check? No.

He then chastised me for having a loaded gun on my table, but I didn’t let him get away with it. I had a “Please ask before handling guns” sign on my table that he didn’t respect. He was right, though. The gun shouldn’t have been loaded at a show. But what is the first assumption everyone is supposed to make about all guns? Treat every gun as if it is loaded. The fact that I had done something wrong did not make his mistake right. In fact, it compounded it.

Lack of gun knowledge
At the heart of the gun safety problem today is a general lack of knowledge about guns. How many of you have seen supposedly gun-savvy people rack the slide on a semiautomatic pistol, then eject the magazine and drop the hammer – just the REVERSE of how it should be done! I once saw a First Sergeant in the Army take a pump shotgun from a guard and do something similar by using the pump to eject the shells. Well, he ejected four of them. He put a hole in the celling of the arms room with number five!

More training is needed
Why are some people careless around firearms? I believe the problem stems from a lack of training. People are no longer trained by the military, nor are many of them being trained by the NRA. That is where primary gun safety education is supposed to take place. The National Rifle Association was founded in 1871 in reaction to the lack of marksmanship and general firearms knowledge among the Northern conscripts during the Civil War. The primary goal of the organization was to “…promote and encourage rifle shooting on a scientific basis.” Since then they have taken on numerous other duties, including training people to shoot. The first thing they teach all new shooters is gun safety.

NRA’s thrust has long been firearms, but they have also recognized the part airguns play in shooter education. Until recently, they thought of airguns for young shooters only, but there is a growing awareness in the organization that adults shoot airguns, too. The current NRA President, Sandra S. Froman, owns an air pistol that she shoots frequently.

More training is needed
Throughout our history, there have been times when average citizens could not be expected to know anything about guns. We are in a prolonged period like that right now, and the situation is being aggravated by the presence of combative sports like paintball and airsoft. People with little or no gun knowledge are engaging in contests where they shoot at other people. We need gun training now like never before!

I have no solutions for this problem, other than to suggest that we all do our part by training new shooters and by standing strong where gun safety is concerned. 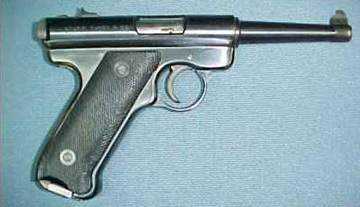