Yesterday, we saw how the Marksman 1010 operates. Today, let’s look at how well it performs downrange. Remember, I am shooting the Marksman 2000 instead of the 1010. It’s a very similar air pistol, but there are the differences I’ve mentioned.

Trigger
A single-stage trigger that breaks at more than 8 lbs. is not conducive to precision target shooting. I’m estimating the one on the 2000 breaks at 10 lbs. plus. My trigger gauge tops out at 8 lbs., so that’s just a guess. It’s perfect for kids and for those new to shooting because it forgives the deadly sin of resting the trigger finger on the trigger; but veterans shooters will find it very difficult to use. There’s no way to know how the trigger feels until you cock the gun. Once it is cocked, it cannot be uncocked. It must be fired.

The trigger on my older model 1010 is a little lighter and a lot smoother. Maybe, there’s a break-in period.

Sights
The old MPR has simple vestiges of sights instead of real working sights. The joint where the two metal halves of the external frame come together runs through the center of the rear sight notch. The older 1010 I have has a very sharp rear sight, but the notch and front blade are both quite thin.

In the 2000 model, a better Patridge front sight was added, but someone changed the once-ideal rear sight to a U-shaped notch that doesn’t work well with a square front. Even though the 2000 is finished in silver and the rear sight is also silver, it’s easy to pick up the black front sight under good lighting conditions. Under poor conditions, though, the rear sight blurs to an indistinct speed bump in your line of sight. 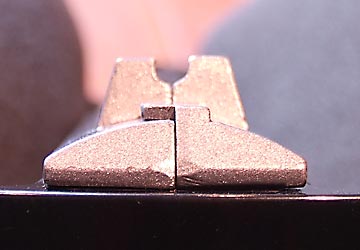 Marksman 2000 rear sight is a groove. Silver color makes sighting difficult unless the light is perfect. 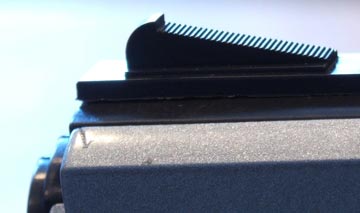 Front sight on the Marksman 2000 is this modified Patridge post atop a ramp.

Accuracy
The first target test was with RWS Hobbys. From 15 feet, I attempted to shoot a group on a target. Two out of five pellets actually hit the 5″ square target paper. When one completely missed the safety backer board (three feet square) that stood behind the pellet/BB trap, I ended the session. Accuracy with lead pellets, Hobbys in this case, is very poor.

BBs were next. I loaded a slew of Daisy BBs into the magazine and proceeded to shoot at the target. From 10 feet, I wasn’t able to stay on paper, so I went up to six feet, where a 3″ group was my best result. Three inches for five shots at six feet is pretty poor performance from a pistol shooter who has a national ranking (NRA Sharpshooter in 10-meter pistol)!

Marksman darts grouped okay, at about 4″ for five shots from 10 feet. If you used a conventional dartboard as your target, this would be a fun gun to shoot. There would be an element of luck involved, but skill would also play a part in your score. 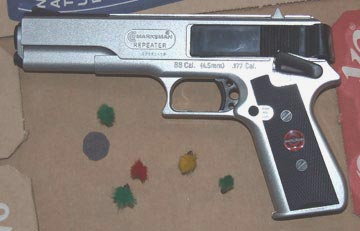 The black dot was the aim point, and this was the best group of five darts shot from 10 feet. Target was just a cardboard box.

Almost as an afterthought, I decided to try shooting Gamo Raptors, too. This is a smoothbore pistol, so the hard zinc (I believe) material they are made from should not be a factor, as far as accuracy goes. They were the clear velocity champions, which should help with accuracy and penetration in a pistol of this low power. 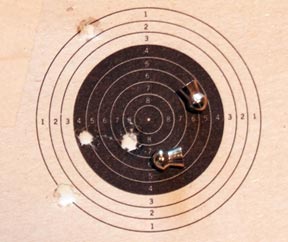 Gamo Raptors were the real surprise, out-grouping other pellets and BBs in the Marksman 2000, as this group from 10 feet shows. Only four holes appear, but two pellets passed through one of them. The aim point was three inches low and two inches to the right.

Penetration
One reader commented that his 1010 will not penetrate a cardboard box, though he didn’t specify what ammo he was shooting. I was surprised to see BBs penetrating a fairly stout cardboard box I used as a target during the chronographing session, but the Hobby pellets just bounced off. The Raptors, however, zipped through with no problem.

Conclusion
I learned a lot during this long test and examination. First, I learned that the Marksman 1010 is not the hopeless case I had always thought. By reading the owner’s manual and using the pellet/dart seater, it shoots as advertised. Second, I confirmed that it’s just a general plinking airgun and not a target shooter. No amount of care will provide groups worth bragging about. However, Gamo Raptor pellets gave the best velocity and accuracy in my test gun. I hope this look helps you to make an informed choice about this gun.