With Casino Royale coming out on November 17, there’s bound to be renewed interest in the Walther CP99 family of air pistols. I reported on the CP99 Compact already, but many of you have had a lot of interest, so I’m doing it again. This time, we’ll look at the gun in a different light.

CP99 Compact
The CP99 Compact is a BB-firing CO2 pistol. It’s modeled after the P99 Compact, a concealed-carry version of the P99. There are several different versions of the Compact, each with a different type of trigger, and the CP99 Compact appears to be modeled after the single-action only (SAO) gun. To fire, the hammer must be cocked first. The only way to do that after loading a fresh 12-gram CO2 Powerlet or putting the safety on is to pull the slide to the rear and release it. 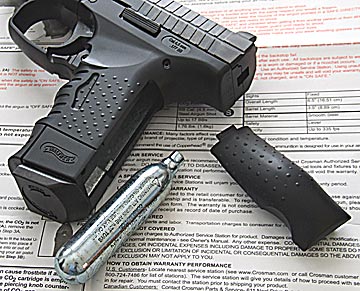 The Powerlet goes in the back of the grip. Don’t forget to put a drop of Crosman Pellgunoil on the tip of each Powerlet!

The pistol weighs a bit over 29 oz. with a fresh Powerlet and empty magazine aboard. It has a fat grip, the result of modeling the gun after a pistol that uses a double-stack magazine to gain cartridge capacity. The barrel is 3.5″ long. When coupled with the blowback slide, I expect a muzzle velocity of around 300 f.p.s. or perhaps a little more. A Weaver rail (according to the Walther website) under the slide and forward of the triggerguard is for mounting accessories. As of this writing, there are no accessories to fit it. There is a laser that’s supposed to be available soon, and we will eagerly await it.

Trigger and safety
As mentioned, the non-adjustable two-stage trigger is single-action only, which means the gun must be cocked before firing. When you put on the safety, the gun is also uncocked, which is a good thing. That way, you can store it with CO2 but not cocked. The trigger-pull is a long first stage followed by a short second that releases at 5 lbs. There is some creep in the second stage.

The safety is a strange lever that takes a deliberate push rearward to unlock the switch so it can be moved. To aid you, the safety has three large ridges to catch the thumb. I don’t know what the reasoning is behind such a design, but as a shooter I have to say I don’t like it one bit.

The safety must be pushed to the rear to allow the lever to swing from safe to fire and vice-versa.

Blowback action
Every time the pistol fires, the metal slide blows to the rear to simulate the action of the firearm. The mass of the moving slide causes the pistol to feel like it is recoiling. Some CO2 gas is used for this function, so the total number of shots is affected. As they did with the PPK/S CO2 pistol, the designers have reduced the velocity to compensate for this. As a result, there are still plenty of shots in every Powerlet. One nice thing is that the velocity of the slide is slow enough to see the slide move, which is mesmerizing by itself. I would imagine a gunstore owner could sell lots of these pistols just by occasionally firing one with no magazine in the gun.

The magazine holds 17 BBs under spring tension. They’re loaded through the large dark hole on the left.

Tomorrow, we’ll look at velocity and accuracy. Then, I have a special treat for you! 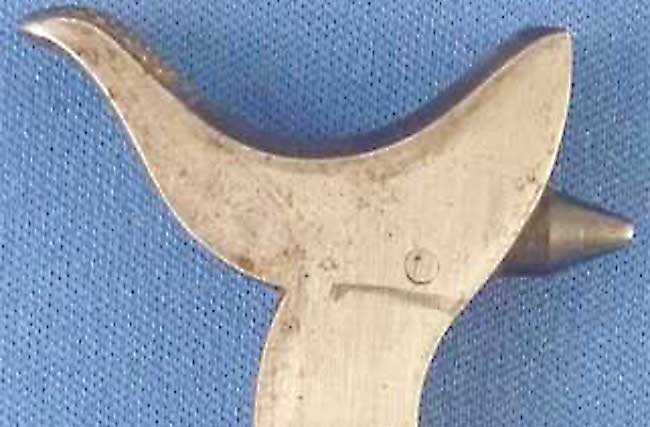