I just have to write this post, so forgive me if it’s not to your taste. Yesterday, I got a question from The.Man regarding air usage in a Talon SS, which is a precharged pneumatic. He wondered if he installed a 24″ barrel on an SS that normally has a 12″ barrel, if he could get a greater number of shots at the same energy level as the standard 12″ barrel is able to produce. I told him yes, he could, but then my brain went into gear, and I had to carry the thought through to completion.

Talon SS from AirForce is one of the most adjustable PCP rifles around.

To my thinking, The.Man has asked one of those fundamental life-changing questions that has the potential to open up airgunning for him. It’s fundamental because it shows that he understands how pneumatic guns work. To me, pneumatic guns work very much like black powder arms. In a pneumatic, a longer barrel means more acceleration time, which equals more velocity. In a black powder gun, the longer barrel promotes more complete burning of the powder, which equates to more push behind the bullet and greater velocity. The two power sources are very much alike in this respect.

To continue the comparison, I have found most black powder arms have a preference for a certain bullet. Once you find it, don’t shoot anything else. Also, find the right powder load and stick with it. A pneumatic pellet gun is the same. Find a power setting (if the gun is adjustable) that works best and the one pellet that’s right, and you don’t need anything else. Allow me to share the work done by another airgunner.

This airgunner took his Talon SS and added a 24″ .22 caliber barrel. He knew that was the best combination for what he wanted, which was a lot of shots at a decent power level. Then, he selected a power setting on the adjustment mechanism. It wasn’t wide open like you might think. He wanted a good number of shots with a good amount of power and a decent velocity spread so he’d have accuracy at 50 yards. He settled on power setting No. 8 in the power adjustment window. The pellet he chose was the Beeman Kodiak.

If you read the forums, you will see Talon SS owners trading power wheel settings back and forth, talking about setting 10.13, for example, which means the gross power indicator is resting on the number 10 and the power wheel is resting on the number 13. What they fail to realize is that EACH TALON SS WORKS DIFFERENTLY! You might get a velocity of 830 f.p.s. with a .22 caliber Crosman Premier on the setting 10.13 on your gun, while I might get 790 from the same setting on mine! I might have to dial up to 12.9 to get the same velocity you get on 10.13. Yet for both of us, 830 f.p.s. might be the maximum velocity our guns get with the .22 Premier pellet. 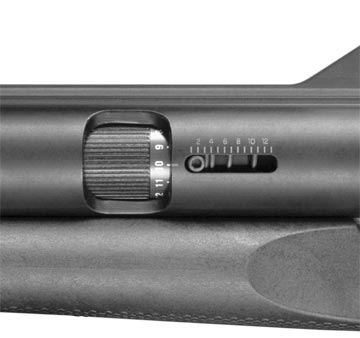 The AirForce adjustment mechanism is a wheel and an oval window cut in the left side of the frame. The round screw head (it’s an Allen screw) in the window indicates the power setting. The reading is taken from the center of the screw. The power wheel on the left also has numbers that align with an index mark. These are the finer adjustments. Each revolution of the wheel moves the power screw one whole number right or left.

Install the 24″ barrel and the adjustability becomes much more sensitive over a far broader range. The gun shoots both slower and faster with the 24″ barrel installed.

Well, this shooter found a spot on his adjustment mechanism where everything was what he wanted, then he did one more thing – which is what this posting is all about. He loosened the two Allen setscrews on the SS top hat (the end of the valve stem that acts as the firing interface for the striker and also the valve stroke limiter) and adjusted the top hat to the point that the gun gave exactly the velocity he wanted. But if he adjusted the top hat to as little at two-thousandths of an inch less clearance, the velocity would drop. To do what he did requires a chronograph, a feeler gauge and patience. But a thoughtful shooter can really maximize his PCP’s potential if he knows what he’s doing. 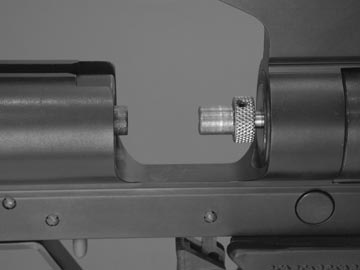 The stainless steel “tophat” was the earlier Talon’s method of adjustment. Today the adjustment wheel makes it unnecessary to ever move this tophat setting, which has 0.080″ clearance from the factory. However, it is possible to adjust this to get a much more efficient setting for a single pellet at a single velocity.

What he achieved is what The.Man asked about – the optimum flow of air without wasting any. The results were incredible! Instead of getting the usual 35-40 powerful shots, he got over 90 shots in a tight velocity spread! In other words, he had his cake and ate it, too!

On Monday, I have a big surprise for you. An old friend has returned, and we’re going to spend some time with him. In fact, next week should have several exciting things for you all! 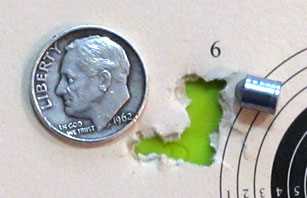