Haenel 310 is a small bolt-action springer with great close-range accuracy.

Here’s one I bet many of you have never seen. The Haenel 310 round ball rifle is a bolt-action, spring-piston rifle that shoots 4.4mm round lead balls. The design dates back to 1933, when Schmeisser built the first one. Haenel and Anschütz sold the identical models, with Anschütz most likely contracting with Haenel to make their model 275. These guns resemble some smoothbore guns made by Mars that really shoot steel BBs, but both the Haenel 310 and the Anschütz 275 are rifles.

Not for kids!
The size is deceptive, because at just over 41″ long and 6 lbs. total weight, the 310 seems to be a youth model. There are also tons of photos showing Hitler Youth learning marksmanship basics with easier-cocking Mars guns. But, the cocking effort of the 310 is in the 20-lb. range, and there’s not much of a handle to grab onto, so this is an adult rifle – or at least one for older teenagers.

Action
The rifle is a bolt-action with some very interesting characteristics. The bolt pivots up without resistance. When it’s pulled back in a rocking motion, it compresses a small but powerful mainspring. That V-shaped protrusion hanging down beneath the stock hides the fulcrum of the bolt/lever. 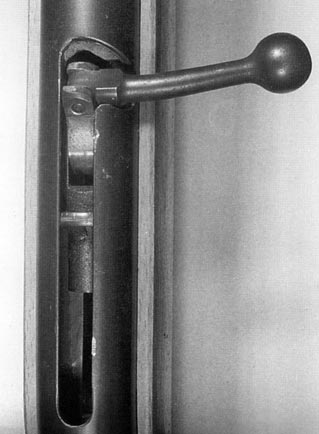 Looking down on the bolt, you can see how it swings up to become a long lever that rocks backward to cock the spring.

Other than the strange method of cocking, the 310 is a conventional BB gun powerplant – and having said that, I suddenly realize that I have never explained that to you. So, there’s tomorrow’s posting! It gets just over 400 f.p.s. with the 4.4mm lead balls that weigh a very uniform 7.6 grains. That makes it a real magnum among BB guns – especially when the rifling is considered, because engraving the lead takes energy. 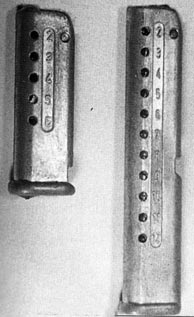 Six-shot mag on left fits nearly flush with the stock. The 12-shot at right is less dependable.

It’s also a repeater! It’s difficult to see in the photo, but underneath the stock below the rear sight is a 6-shot magazine. A 12-shot was also available, but feeding wasn’t as reliable. The mags were a pain to load (one ball at a time – no speedloaders), and they emptied fast because the little rifle is a delight to shoot.

Like all old BB guns, these rifles need lots of oil to keep the leather seals fresh and pliable. Often, you can get a bargain if the owner thinks the gun has lost its power. All it usually needs is a good soaking of petroleum oil to get it shooting like new.

Accuracy
At 5 meters (16.4 feet), this rifle is just as accurate as Daisy’s Avanti Champion 499, which has been called the world’s most accurate BB gun. Of course, the 310 is a rifle and therefore barred from BB gun competition, but shooting as well as a 499 is an accomplishment. Imagine shooting 6 shots into a group the same size as the diameter of a thin ballpoint pen!

Available by the truckload!
When East Germany fell, surplus buyers went in and found bargains galore. These rifles were found at the Stasi (secret police) headquarters and sold through a U.S. pawn shop. They sold the 310 for $49, then $59. I bought several guns from them, plus a lifetime supply of lead balls and extra magazines. Today, the supply has dried up, and 310s go for $150-200 at airgun shows. Some were in good condition, while others were pretty well used. Have you ever heard the stories about World War II Harley Davidsons new in the crate going for $400? Well, I never found any of those, but this find was equivalent to that for about two years. There were other models as well, such as the 311 and 312 pellet rifles that are both target guns. The 311s were $79 and the 312s were $99, as I recall. Both bring around $200 today.

The Anschütz 275 has always commanded a premium over the Haenel – kind of like the Dianas made with the Winchester name on them. I see 275s selling for around $300 these days. But if you’re patient, you will be able to find either airgun. Target shooters will enjoy them.