Yesterday was a great day at the range, except for the wind. I tried to shoot groups at 50 yards with the S-16s, but the changing breezes blew my groups apart. The best I could do was 1.5″ for five Crosman Premiers.

Heavy trigger!
I have to say, the heavy trigger did affect how I shot. I found myself pulling the trigger with two fingers, which made the hold less steady. I do believe that a 3-lb. trigger-pull would improve the situation immensely. 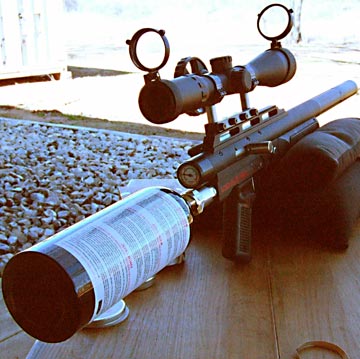 A great day for range testing, but it was windy!

25 yards
So, I pulled the target in to 25 yards. With the strong breeze, that was the only way to complete this report. The 3-12x44mm Leapers scope scope was perfect for this application, and the ultra-high B-Square scope mount proved to be just high enough to bring the scope to my eye. Starting with Crosman Premier pellets that proved to be the best of the day, I shot several tight groups.

Shrouded in mystery
After my comment on the effect of the shroud, I tried it both on and off the gun. Wth the shroud on, the accuracy doesn’t degrade as much as I had thought it would at 25 yards – perhaps an extra quarter-inch larger is all with Crosman Premiers. At 50 yards, the shrouded groups were twice the size of the group shot without the shroud, so something is happening between 25 and 50 yards. 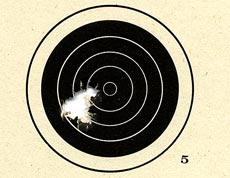 The best group at 25 yards was this group of five Premiers measuring, 0.252″. 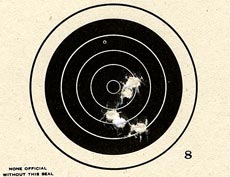 JSB Exacts were also good, just not as good as Premiers. They also fell out of the magazine more readily until the mag was loaded into the rifle. I mentioned earlier that this was a problem with some pellets.

Not so good
A pellet I cannot recommend in this rifle is the Logun Penetrator. It simply refused to group better than one inch at 25 yards with the shroud off the barrel and nearly two inches with the shroud on.

Things to consider
This conversion to CO2 pushes the pellet several hundred feet per second slower than the rifle normally gets with air, so the pellets behave differently. When I test the rifle with air, I’ll probably use these pellets plus a few others. And another pellet might be more accurate under those conditions.