I’m doing this post at the request of Steve, who asked:

Do you think you could write up a detailed article about peep sites and how to use them? I just bought one for my 392, and they are indeed very accurate; I was quite impressed. But, I found that I couldn’t find much on the web about how to use them, which leaves me to believe that peep sites are a bit underrated in lieu of scopes. But I think they’re a great cost-effective alternative, especially at around the 25 yard range.Cheers, Steve Seattle, WA

History
I don’t know when the first aperture-type sights were used, but in 1884, Lieutenant Colonel A.R. Buffington introduced a new type of rear sight for the .45 caliber rifle (the Trapdoor Springfield). It featured a combined open and aperture (peep) rear sight in a raised leaf that was both adjustable to 2,000 yards range and could also adjust for windage.

It may not have been the first use of peep sights on a rifle, but the 1884 Buffington rear sight on the Trapdoor Springfield was probably the first military use of peeps. It even compensated automatically for the drift of the bullet caused by the right-hand twist of the rifling! A very complex sight, it got the U.S. into peep sights for battle rifles, and they still use them today.

I’m pretty sure that when soldiers saw the new sight for the first time they hated it! They were used to open sights and buckhorns, and the newfangled peep must have confounded them. To put it on a primary military rifle in 1884 no doubt took real courage. However, when the U.S. adopted the M1903 Springfield rifle 19 years later, it had a modified Buffington rear sight, and every primary U.S. battle rifle since then has had a peep sight in the rear. Today, there is a move toward optical sights on the battlefield, but as of this time the peep sight still reigns supreme. Why is that?

It fixes parallax!
A good peep sight forces the shooter to position his eye in the same place every time, because it is difficult to impossible to see through the hole if the eye is elsewhere. But allow me to differentiate a good peep from an average peep. A good peep has a hole small enough to do what I just said. An average peep, and this includes all military peep sights I have seen, must use a larger hole for rapid target acquisition. The military doesn’t care where the enemy is hit, as long as he is hit. Target shooters do care where they hit! 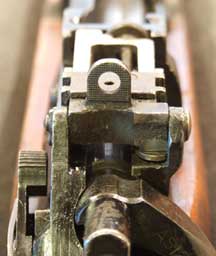 The battlesight peep on an Enfield No. 4 Mk1 rifle can almost substitute as a basketball hoop. There is a much smaller peep hole on the calibrated leaf that’s laying down in this view. With a hole this large you won’t shoot targets, but a man at 100 yards is not safe. For more exacting work, flip up the leaf and go to town! The No. 4 Enfield is one of my personal favorite WWII battle rifles!

How to use a peep
Using a peep sight is MUCH easier than using an open notch-type sight! With a peep, all you do is look through the hole in the rear sight and put the front sight where it needs to be in relation to the target. Your brain will force you to center the tip of the front sight in the rear hole because that’s where the light is the brightest and the sight is easiest to see. Yes, you can subvert this if you really want to, but if you don’t think about it, your brain will center the front sight every time. For that reason, peeps are best used with square post front sights and annular (ring) front sights. Trying to use a peep with a post and bead front sight can cause confusion until you sort it out. If you think of the bullet going to the tip of the front sight, you’ll get along well with a peep. 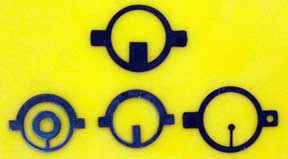 When using a peep with a front sight that takes inserts, choose the annular type (left) or a square post (center). The post and bead isn’t as useful until you practice with it for awhile.

Why don’t more rifles come with peep sights?
Today, any rifle that doesn’t easily accept a scope is dead in the water. Non-optical sights generate little interest among rifle shooters anymore. The last big peep sight push on pellet rifles came from Germany in the 1950s and ’60s. And Daisy collectors can tell you that certain Daisy models such as the No. 25 pump have had combination peep and open sights that were very popular at that time. 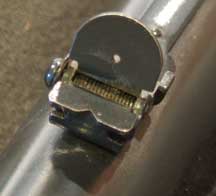 So, Steve, the peep sight is not much of a mystery to use. It forces you to concentrate on the front sight, which is where accuracy comes from. It works just like other open sights except for the aperture, however that small hole is what makes the peep sight the easier sight to use. 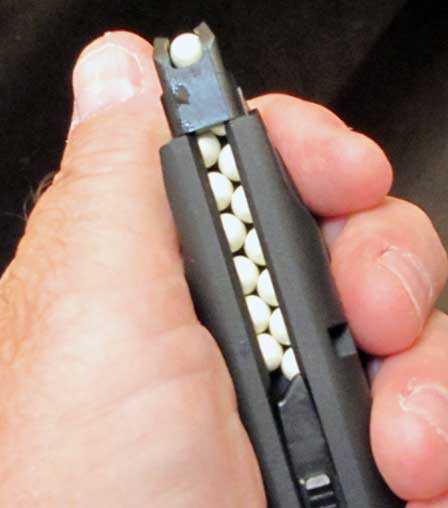