William made an observation that lighter powerplant components would speed up locktime in a spring-piston airgun. I have had some experience with lightweight components, as well as some very heavyweight components, so I thought I’d make my answer today’s posting!

What is locktime?
Locktime is an old term that I believe originated in the days of flintlock rifles and muskets. A flintlock has a very long time from when the cock that holds the flint falls against the frizzen and the main powder charge ignites. After that, it’s just as fast as a caplock. If you watch the movie Patriot, you’ll see this clearly. The priming charge in the pan goes off several milliseconds before the main charge of gunpowder ignites. You see and hear two distinct explosions.

A good flintlock was one with a fast locktime, so there was less time for the shooter to flinch before the bullet left the muzzle. Having a charge of powder explode in front of your face is good cause to flinch!

Locktime and firearms
When self-contained cartridges came into use, locktime evolved to mean the time it took the hammer to fall against the primer after the sear released it. Again, faster was considered better at reducing random movement; though, if you examine that critically, you’ll be able to poke holes in the logic. Rather than fast locktime, a shooter is far better off with a more neutral hold and good follow-through. Hoping for a fast locktime seems bent on sniping the target at the critical moment it is in the sights, and it’s actually better to keep it there longer than to hope for a coincidental miracle.

Locktime and airguns
When it comes to airguns, locktime has to be considered for each powerplant separately, but William’s observation was about a spring-piston gun, so that’s what I’ll review. Locktime has no bearing at all on a spring-piston gun, and here’s why. In a spring-piston gun, the pellet doesn’t start moving until the piston has almost come to a rest. A fast locktime wouldn’t help accuracy, because that pellet isn’t going to move until all the recoil and vibration patterns have begun. Whether it takes one millisecond or ten milliseconds for the piston to stop after being released by the sear/piston catch makes no difference, because the pellet is still stationary at the end of it all.

That said, there have been experiments done to lighten powerplant parts and speed up the piston cycle time. Jim Maccari made a plastic piston to test this very thing and installed it in a TX200 MkII. The gun was lighter but vibrated so hard that it stung the off hand holding the stock. No additional accuracy was noted.

Tom Gore of Vortek made a gas spring for a Beeman R1 that was .75 lbs. lighter than the steel piston and coil mainspring in the stock gun. This unit was incredibly quick and also vibration-free. It did improve the actual accuracy because the lack of recoil and vibration made the rifle easier to shoot accurately. Gore went on to do the same thing for the Beeman Kodiak, which is the Webley Patriot. It reduced the weight of the gun and almost eliminated vibration and recoil entirely.

Another gentleman attempted to build a more powerful spring rifle by scaling up the Beeman R1 by 25 percent. His 11-lb. monster had bigger everything…a bigger piston and a bigger mainspring that was harder to cock, at 75 lbs. of force. But the power was actually less than what a stock R1 had, because the bigger parts took longer to cycle. Recoil was about like the Webley Patriot, which is to say, brutal. Accuracy was average, despite the rifle’s Anschutz barrel.

Perhaps, the greatest experience I’ve had with a balanced spring-piston powerplant was with an R1 tuneup kit from Ivan Hancock. The mainspring was incredibly powerful and the piston was heavy, but the parts fit so tight they had to be forced into the rifle with a rubber hammer. When that gun shot, it developed 22.5 foot-pounds of energy in .22 caliber, yet the recoil was less than half that of the stock rifle. Vibration was virtually gone and the locktime was very fast. That gun taught me that it isn’t any one factor that’s important to the performance of a spring gun – rather, it’s how they all work together.

By the way – yesterday was the day for shooting. I finally got a wind-free day at the range, so next week I’ll get back to the Whiscombe and address several of those questions we’ve been wondering about for so long. 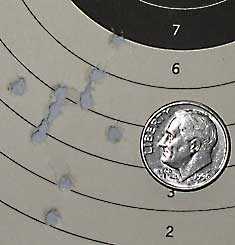