Big post today. We had a question last week that I want to explore. Here it is:

Is it possible to damage a rifled barrel by using pellets that are too large? I’ll explain….. My Condor is a .22, and I have managed to locate some VERY heavy pellets from Daystate (40 grains). I bought and used a few, but on the tin they say .223. They are impossible to push in with your finger alone, and they dont have a skirt, so i actually used the backside of a small metal spoon. This got them in (after a few slips where i bent the pellet around!!!). When fired they leave the barrel at over 900fps, which is actually slower than I expected, and I think this is due to the super tight fit. I have only fired 10 or so this way, as I dont want to ruin the barrel.  Are these safe to fire?

And here was my answer:

What you have are NOT PELLETS. They are BULLETS!

This is why I rant on about the proper terminology. I’m not chastizing you for not knowing, but whoever (at Daystate) thought that because a projectile is shot from a pellet gun and not a firearm it has to be called a pellet has done a disservice to their potential customers.

Your bullet is actually from an Eley .22 long rifle cartridge that Daystate buys from Eley for one of their rifles that has a .22 rimfire barrel. Pellets don’t work in that rifle, so these bullets have to be used.

The bore on a Condor is nominally 0.2165″ in diameter, so this 0.223″ bullet is way too large for the bore. Only a very powerful gun like the Condor could fire it.

You are not hurting the barrel, unless you screw up the breech with whatever tool you need to push the bullet into the bore. You are sizing the bullet when you shove it into the Condor barrel, and that’s why I’m guessing it’s leaving a ring of lead at the breech.

You think 900 f.p.s. is SLOW??? Instead you should wonder how the Condor can shoot these bullets at all! You are pushing a .22 caliber bullet through a .21 caliber bore.

Stop using these bullets immediately. They are not accurate and to continue to use them only exposes your rifle to potential damage.

If you are going to experiment with airguns, you need to get really involved and read about firearms, too. Black powder firearms are especially pertainent, because they share many of the same physical attributes as our airguns. For example, longer barrels get faster velocity with both black power arms and pneumatics. And it never hurts to know something about reloading, either. Just as you should not resize a bullet more than one thousandth of an inch if you want accuracy, you also shouldn’t expect accuracy when a huge bullet has to be forced into a smaller barrel like our reader was doing. Once it’s in the barrel, the bullet is not too tight to shoot, because lead doesn’t expand after being sized down, but when you size a lead bullet six thousandths of an inch or more, there is no hope for accuracy. The axis of the bullet has been changed by the resizing.

They are BULLETS – not PELLETS!
And this is why I get on my high-horse when manufacturers and dealers start referring to solid lead projectiles as pellets. Bullets are solid and have a high ballistic coefficient. They also have a high mass. The longer and heavier they are, in relation to their diameter, the faster the have to be spun to stabilize them. Spin rate is a function of the rifling twist rate and the velocity of the projectile. If a Condor drives a 40-grain bullet at 900 f.p.s., the rotational spin rate is 675 revolutions per second (40,500 RPM). A standard speed .22 long rifle cartridge drives the same bullet at 1,138 f.p.s., producing a spin rate of 853.5 RPS (51,210 RPM) from the same rifling twist. That higher rate is required to stabilize that bullet. The Condor might shoot it accurately enough at 10 and even 25 yards, but by 50 yards the bullet will be scattering.

On the other hand, a 28 grain Eun Jin PELLET driven from a Condor at 1,000 f.p.s. is fully stabilized by BOTH its spin of 750 RPS (45,000 RPM) and the drag created by its hollow tail and wasp waist. The 28-grain pellet is nearly as long as the 40-grain bullet because it is hollow inside, but the aerodynamic drag created by the skirt more than makes up for a slower spin rate.

Bullets are usually not accurate in pellet guns
Because the twist rate of a pellet rifle is so slow (one turn in 16 inches of travel), a solid bullet usually cannot be stabilized properly. There is a firearm equivalent to which we can compare. Aguila, the Mexican ammunition maker, makes a special SSS (Sniper Sub Sonic) bullet for their special silhouette cartridge. It weighs 60 grains and is therefore longer than a 40-grain .22 LR bullet. These cartridges will fit in a rifle chambered for regular .22 long rifle ammunition, but they won’t be accurate! At 25 yards you might get them to group, but by 50 yards, they are all over the place. So, why does Aguila make this cartridge? 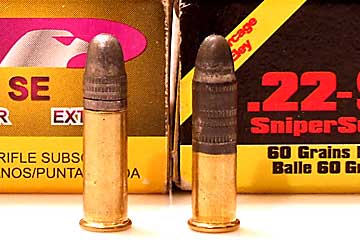 The difference between an Aguila SSS (right) and a standard 40-grain .22 Long Rifle bullet is obvious and dramatic.

There are special .22 rimfire silhouette rifles that have barrels with a 1 turn in 10-inch twist rate. The normal .22 twist rate is 1 turn in 16 inches. In these faster-twist barrels, the SSS bullet is very accurate and also delivers more of a punch to topple those heavy steel targets. It’s not even launched at 1,000 f.p.s., yet it is stabilized by the faster twist. Here is a bullet made for just a single purpose, and it has to be used in a gun built just to handle it. The rifle will not be successful with any other type of .22 rimfire ammo and the bullet cannot be fired in any other gun that is chambered to accept it. Talk about one gun – one bullet!

Well, your pellet rifles are not much different. They will function best with just a few similar pellets. Specialized guns like those from AirForce, some from Air Arms and some from Shin Sung have easily adjustable velocity, so they may be able to handle more types of pellets that fixed-speed guns. But even for them there are limits.

Size matters
Now, there was a huge clue as to the nature of those heavy Daystate “pellets.” They said .223″ on the tin. And the reader wondered whether that made any difference. Had he known the bore size of his Condor and the fact that bullets cannot be resized that much and still be accurate, he would never have tried them. This is where knowing the technology of firearms and reloading comes into play. I have said more than once in this blog that .22-caliber pellets are not the same size as .22-caliber bullets made for firearms. A .22 pellet bore may not exceed 0.218″ in diameter, while .22 firearm bullets come in sizes .223″, .224″ and .225″. GUESS WHAT? You’re not supposed to use a .223 bullet in a firearm bored .224, either. You .22 Hornet owners should know what I’m talking about.

Another clue was the fact that he needed a spoon to shove the bullet into the Condor’s breech. This is a problem with all bullets in air rifles. They don’t chamber easily. Even if bullets are made to the correct bore size, you still have to engrave the rifling along the entire length of the bullet. That takes a lot of force, which is why many muzzle-loading rifles use cloth patches to take the rifling instead of trying to engrave a lead bullet. In the 18th century when the military tried to shoot patchless lead bullets in rifles for the first time, they had to use iron ramrods instead of the traditional wooden ones, because the force needed to engrave the rifling broke wooden ramrods. Introducing an iron ramrod into the bore of a rifle was the kiss of death for accuracy because of the damage it would do to the rifling, but there was no choice. The undersized Minie ball bullet solved that problem in 1840, but by then the days of muzzleloading firearms were almost at an end.

You’re on your own
The rate of product development today has outstripped the ability of most companies to keep pace with technical information. Six millimeter plastic balls are now called BBs because of ignorance and a language translation problem, so when potential new shooters go to Wal-Mart to buy airsoft guns for the first time, who will explain to them that Daisy sells tiny steel balls they call BBs and all the airsoft BBs are larger and made of plastic? If we confuse bullets with pellets, then what hope do we have that people will understand that 6mm round plastic balls ARE NOT THE SAME AS STEEL BBs (and will not work in BB guns)?

The world I grew up in demanded that shooters at least tried to understand the technology. But modern information technology has changed all that. People expect to be entertained by the owner’s manual, which is why DVDs are packaged with pasta makers. Today’s shooter has to find information sources he can trust and shut out the inane jabbering the internet encourages.

30 thoughts on “Bullets and pellets: What gives?”