I have wanted to do this report for close to two years, but the availability of guns held me back. Pyramyd Air kept selling out before I could get my order in. However, now I have one. Here we go!

In the years since I last tested a new IZH 61, things have changed. Metal pellet clips have been replaced with plastic, and some of the parts that used to come with the gun no longer do. When the new model came out, I listened to whining all over the forums about the use of plastic, and I really wanted to see for myself what effect that has on the gun’s durability – if any. What all the whiners seem to have forgotten (or perhaps never knew) were the problems we had with the older all-metal guns. I remember when the guns were shipped with faulty desiccant packets that broke open during shipment. The late “Golden” Joe Goulart of Golden Toller Guns sold IZH 60 and 61 guns for practically cost to get rid of them. Owners had to strip the gun to clean out all the desiccant crystals from the powerplant. It was a chore, but you wound up with a very nice sidelever spring rifle for very little money.

Then there were “problems” with the rifle that weren’t problems at all. Some guys bought the thing and criticized it for not shooting 1,000 f.p.s. Others criticized the short stock pull, without realizing that a target rifle NEEDS a shorter pull because of the way it is held. And, I still hear from people who want to mount scopes on the gun and what can be done about that?

Folks, the IZH 61 (and the single-shot 60) is an informal TARGET rifle – pure and simple. The Russians made it look like an assault rifle, but at its heart it has always been a paper-puncher and a plinker. No hunting, no field target – just casual fun. That is unless you’re the guy from Maryland who installed a $350 Anschütz aperture rear sight and had a custom laminated wood stock built for $275. He turned his rifle into an honest NRA Sporter-Class competition target rifle, except that he went way past the $500 limit to do so. He did it because the rifle is so darned accurate that he wanted to make a point.

You don’t have to spend hundreds of dollars to make your IZH 61 shoot good. Just buy it and shoot it. It comes from the box ready to go. Use good quality wadcutter pellets. I like Gamo Match, Crosman Premier Super Match and RWS Hobbys. Not because they’re the most accurate, but because they’re accurate enough and are a good value.

A buddy of mine used to take his rifle to an airgun range, where other airgunners would see it and ask to buy it from him. He went through 23 IZH 60s that way. People usually love this gun when they see what it can do.

Description
The rifle is a spring-piston sidelever five-shot repeater in .177 caliber, only. It has a rifled barrel of legendary accuracy. It has adjustable sights, an adjustable trigger and a stock that’s adjustable for the length of pull. While the maximum pull is 14-1/2″, most shooters will want less. A person who is comfortable with a 14-1/2″ pull on a sporting rifle will probably find 12-1/2″ right for target shooting.

It weighs just 4.25 lbs. and measures almost 34-1/2″ with the stock fully extended, and just under 31-1/2″ when it’s in as far as it will go. The cocking effort is a laughably light 12 pounds, making it one of the most enjoyable air rifles in the world. Light weight, easy cocking and five shots. If that isn’t a recipe for fun, I don’t know what is.

Additional stock adjustment
The stock has the facility for additional length adjustments. Remove the butt by removing the thumbscrew and washer used for locking the stock. That exposes two slots in the bottom of the plastic stub that stays with the rifle. The threaded boss that accepts the locking screw slips into either slot, giving an additional inch of adjustment.

The stock locking screw boss is located in the rear (right) slot. By slipping it into the front slot, the stock can be adjusted about an inch shorter. 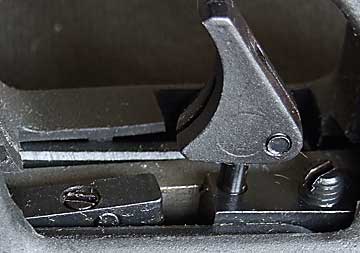 Long screw behind the trigger blade (right) adjusts the trigger return spring tension. That controls trigger-pull weight. Flush screw in front of trigger adjusts the length of the first-stage pull. Trigger blade itself can be swiveled from side to side to suit your tastes.

Rear sight
This is one of the big changes that was made when the rifle was modernized. Besides changing the receiver from steel to plastic, the maker fixed the rear sight on the barrel hanger. It used to be removable and a plate that turned it into an aperture sight was included with the rifle. That doesn’t come with the gun anymore because if the rear sight can’t be moved back, it can’t be used as a peep sight, either.

The sight adjusts for elevation via a thumbwheel located in the conventional place. But the windage adjustment is a bit hinky. You must loosen two tiny screws and slide the rear notchplate sideways. 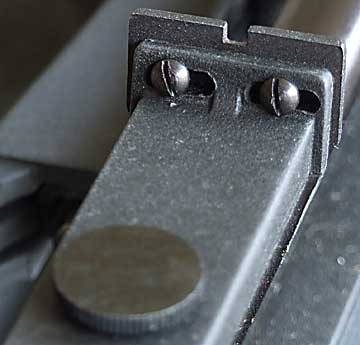 Thumbwheel in the foreground is the elevation adjustment. Windage adjusts by loosening the two slotted screws and sliding the plate sideways.

What comes with the rifle?
For your incredibly low purchase price, you get the rifle, owner’s manual, two magazines, a cleaning rod (that I wouldn’t use because it doesn’t accept accessories) and a spare mainspring. That spare mainspring has started more than a few U.S. airgunners on the road to hobby airgunsmithing. They have discovered this rifle is light enough and small enough to not present the problems of more powerful air rifles, so the detriments to stripping the gun are few. Not that I am advising you to tear your gun apart. But, a rifle of this power is easier to deal with in all ways than a Webley Patriot.

Today was just an introduction to the rifle. Next time we’ll shoot and see how accurate it really is.