I would like to thank all the readers who commented on the Benjamin pump effort reduction project last Friday. You gave us a good idea of how the market would react to this endeavor.

Today’s post is for a reader who has wanted this pistol reviewed for a long time. I’m sorry that it takes so long to get around to things like this, but I’m glad to finally be doing this report.

The Daisy Powerline 008 is a CO2 pistol that shoots both BBs and pellets. It has a rifled steel barrel with extremely shallow lands that can accommodate steel BBs without damage to the rifling. The pistol uses a standard 12-gram CO2 cartridge hidden in the pistol grip. The piercing mechanism is unique, in that it uses a roller bearing for smooth operation and there are no user adjustments. New owners don’t have any adjustments to learn, just drop a fresh cartridge into the space provided and close the backstrap piercing lever. Snap the left grip panel in place, and you’re ready to go. 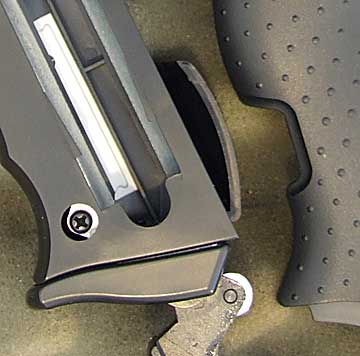 Flip-up barrel
To load the 8-shot rotary clip, release the barrel and flip it up at the back. The white plastic clip has a hole in the center on one side only, and it fits the steel pin under the barrel. Don’t worry about indexing the clip when you install it – the gun takes care of that automatically. Each clip has a magnet, so it stays in the gun by itself when the barrel is flipped up. The magnet also holds BBs in place, so the pellet chambers can be sized appropriately for the larger .177 lead pellets. 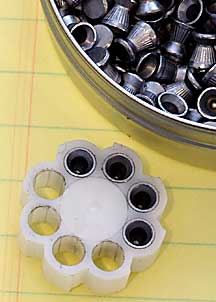 Clip is easy to load and to install in gun. 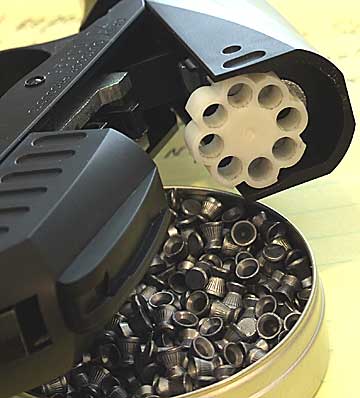 The barrel pops up to receive the 8-shot clip. It’s held in place by a magnet.

Double-action only
The action is DAO, so even though there is a hammer visible in the frame, it will not stay cocked by just pulling it back. The trigger must be pulled for every shot. The trigger-pull is delightfully light and smooth. A wide trigger blade helps spread the effort. If you like to shoot action pistols, you’ll enjoy this trigger.

Very ergonomic
The pistol fits the hand quite well. Some readers have criticized the curvy appearance of the grips; but when you hold the pistol, you know why they did it that way. The manual safety is located at the right rear of the frame. It’s a spring-loaded one that you must pull back to move. When it’s on, the trigger is no longer connected to the hammer.

Sights
The non-adjustable sights are a classic square notch and ramp front. They look very square, but have a little too much space on either side of the front post. However, they’re easy to align and the sight picture is easy to acquire. The gun I tested shoots just to the left of the aim point, which is probably a function of the DAO action. As a righthander, I tend to pull shots to the left. The gun has no provision for mounting optical sights or lasers, so don’t even ask. With an all-plastic exterior, it would take a special mount, indeed, to overcome this drawback.

My test pellets
For this test, I used RWS Hobbys, Gamo Match, a Chinese wadcutter that I’ve used for years in 10-meter competition and a Czech pellet called the Diabolo Standard.

Accuracy
I was able to shoot offhand groups that ranged from 1.5″ to 2.5″ at 20 feet. The Chinese wadcutters were the most accurate pellets by half an inch. The others were about comparable, except the Czech domes, which were clearly in last place. Shooting was two-handed because of the DAO operation. A double-action only pistol is not a target gun, so this accuracy should be considered minute-of-pop-can, for which the gun is intended. 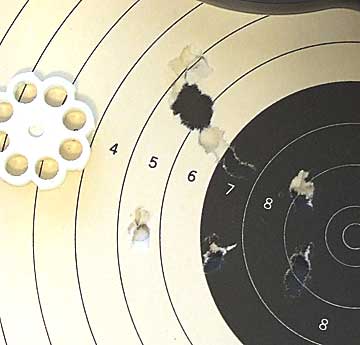 Velocity
The pistol is rated to 480 f.p.s., but shooting in a 71-degree temperature, I didn’t see it. Hobbys were the fastest pellets, at 411 f.p.s. average. The Czech domes were next, averaging 393 f.p.s. Chinese wadcutters averaged 375 f.p.s., but with a surprising 35 f.p.s. spread. The surprise was that they were the most accurate pellet, though 20 feet is hardly far enough to separate the pellet holes by velocity. Gamo Match averaged 360 f.p.s.

As expected, BBs went faster than pellets
BBs are faster, of course. Daisy zinc-plated BBs averaged 435 f.p.s. under the same conditions as the pellets. Accuracy was better than expected. From 15 feet, I shot a 2.5″ group to the same point of aim the pellets were going. So this will be a fun BB plinker. Remember that everyone in the vicinity should wear safety glasses when you shoot BBs, because they rebound from every hard surface.

How many shots?
This gun is a little hotter than the average CO2 pistol. It only gets about 40 shots or five magazines before needing a new CO2 Powerlet.

Bottom line
If you want a DAO action pistol that can shoot both BBs and pellets, this is one to consider. Don’t expect it to compete with Umarex pistols costing two and three times as much, but it is a viable alternative to pistols like the Gamo P23 and the Crosman 1088.