This posting was requested by frogman, who says he has trouble with unsupported shooting positions like standing (offhand), sitting and prone. Today, I will address the offhand position. And, yes, frogman, there are plenty of secrets for all these shooting positions.

Let’s begin
Shooting offhand starts with the alignment of the body. Your skeleton is the structure that keeps you erect, but if it isn’t in line with what you are trying to do, your muscles will constantly try to adjust to hold you in position. The result is a wobble. A right-handed shooter should stand almost 90 degrees to the target, with just a slight turn toward the target to allow the rifle to point naturally and without effort. You know when you are properly aligned because, when you mount the rifle, it is almost aiming at the target, without the need to correct through small movements of the upper body. All my tips and explanations are for right-handed shooters.

Tip 1. Small adjustments
You can make small adjustments to the position by turning your feet without changing position. The right foot, which is trailing, is the best foot to adjust positions. Rotate on the HEEL of the foot in either direction to make small sideways adjustments. Do not attempt to adjust more than a few degrees using this technique. Reposition both feet if the rifle is off-target more than that.

Tip 2. Lock your stance
Once you are in position, rotate the left (front) foot to the right by rotating on the heel. This will tension both legs to make your stance firmer. If it throws you off-target (it shouldn’t), then reposition yourself – you weren’t in the right stance to begin with.

Tip 3. Don’t hold the weight of the rifle
A right-handed shooter bears most of the weight of the rifle in his left hand, but he doesn’t hold it with his muscles! No one can do that and hope to have a steady stance. Instead, he brings his upper arm in tight to his body and lets the weight of the rifle rest on his slightly extended forearm. The rifle, forearm and upper arm form a triangle whose ends don’t close. I have seen 10-year-old girls hold 8.5-lb. target rifles with relative ease this way! But if you don’t do it like this, the brawniest man in the world cannot hold a rifle steady. 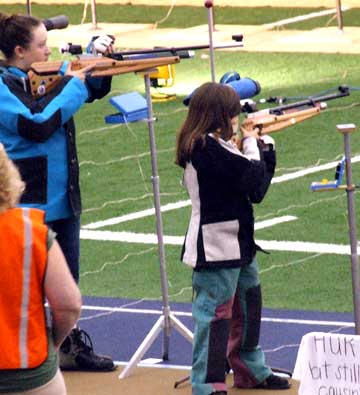 Target rifles are made with all sorts of forearm aides to make this hold easier. In Olympic competition, the hand stop is popular. A century ago, a special palm rest was installed to make it easier to hold a rifle this way.

Anschütz target rifle has a hand stop under the forearm to stop the off hand from sliding forward.

The Schützen palm rest dates from the late 19th century.

Thin shooters will learn to throw their hips out to the left to give the upper arm something to contact. Heavier shooters will have less difficulty. Adjust where the off hand is located along the forearm to get the rifle level. 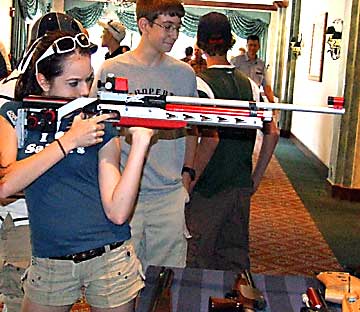 She has to shift her hips to the left to touch her upper arm.

Tip 4. Keep the shooting arm away from the body
You’ve done all this work to get into a good stance – don’t ruin it by holding your shooting arm tight to your body where it can set up wobbles. Practice aligning your shooting upper arm and elbow at 90 degrees to your body, so your elbow is pointing to your right. As you practice, you may discover that you can lower your elbow slightly and be more comfortable, but keep that shooting arm from contacting the side of your body if you don’t want to wobble.

Tip 5. Don’t grasp the stock
You will notice that neither of the target shooters pictured above is grasping the stock with her fingers. Both use the flats of their open palms. Does that sound like anything you’ve heard before (hint…the artillery hold)? Now, if you’re out deer hunting, you will grasp the stock, but I don’t expect you to use a classic offhand stance when hunting.

Okay, frogman, now I want to hear from you. Have these pointers helped you improve your stance and reduce the wobble. 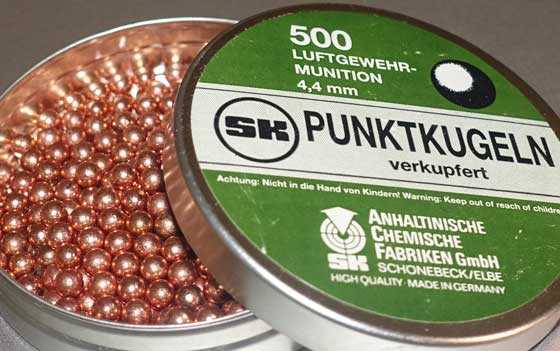