B.B. is giving me a chance to tell you about some neat collectible pistols today.

Before we begin, Pyramyd Air has asked me to alert you to a new shipment of Air Arms guns. Watch the website this weekend and early next week for a host of new guns to appear!

It’s been a long time since I got to have any fun with collectible airguns, so today’s the day. Allow me to introduce you to a matched pair of high-grade precharged pneumatic air pistols!

First, a bit of history
In the late 1700s, experimenters around the world were trying to push the state of the art for firearms, and one dream on everyone’s mind was to make a repeating rifle. Since the powder charge was loose in those days, repeaters didn’t make much sense, plus the fact that black powder, which was just called gunpowder at the time, is an explosive, unlike modern gunpowder. Any stray powder didn’t just burn, it burned at the rate of about 11,000 feet per second, which makes it a low-grade explosive. Obviously having powder loose in a gun made for great danger.

One experimenter who was attempting to make a repeater was Italian Bartolomeo Girandoni. He had to end his experiments, though, when one of his rifles exploded and killed his son. Girandoni switched to experimenting with high-pressure air, and in 1780 he was awarded a contract to supply the Austrian army with his new design of a repeating air rifle…a 22-shot .47 caliber breechloading rifle. Over the next two decades, he supplied them with 1,000 to 1,500 rifles, hand pumps, large gang pumps and parts.

The world was in awe of an air rifle that could empty its magazine in under one minute. The awe quickly turned to flattery as private gunsmiths all over Europe began copying Girandoni’s design and began producing sporting rifles of their own. If you are interested, you can see one such rifle on the DVD Antique Big Bore Airguns. 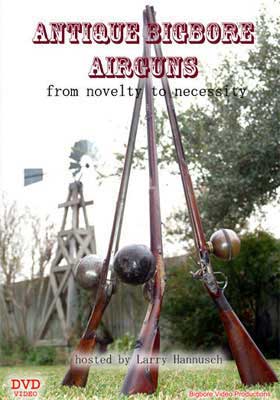 Here is a video you can’t get from The History Channel.

Imagine how rare and wonderful these sporting copies of the Girandoni military rifle must have been at the time. Air rifles were scarcely known, and yet these were repeaters! Imagine how much rarer a pistol version of the same gun would have been. Well, such guns do exist. I have seen and held them. Larry Hannusch owns a matched pair of repeating air pistols built along the Girandoni pattern by a maker who signed his name as Cantarini of Vienna. He displayed them at the Little Rock Airgun Expo several years ago, and he allowed anyone who was interested to photograph them. 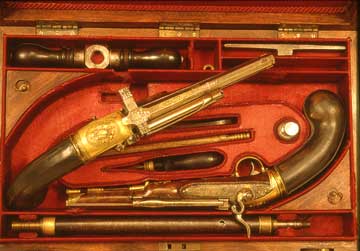 A cased pair of Cantarini pneumatic pistols with all their equipment is impressive. 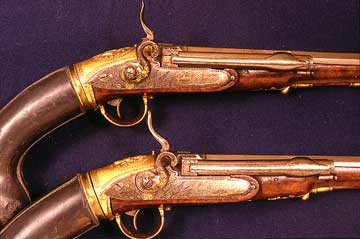 Though the pistols are considered a matched pair, they do have subtle differences. Both are heavily covered with gold inlay and gold-plated brass fixtures.

Larry was put in touch with the owner through an internet lead from my wife, Edith. They met, and he bought them on the spot. They were complete but both were missing the leather covering for their butt flasks, so he had a master leatherworker recover them in black Moroccan leather, like the originals. He assembled the kind of tools they would have had, plus a vintage hand pump, and had the entire collection cased in the French style in red velvet.

These pistols function in the Girandoni pattern, which means they feed balls by gravity from a steel tube on the right side of the receiver. A spring-loaded shuttle slides to the right to pick up the next ball, then back to the left to align the ball with the bore. The air runs from the front of the air reservoir in the butt to directly behind the ball. (AirForce revived this valve design in their rifles). It is most efficient because the air doesn’t have to make any turns on its way out the bore. In the Cantarini pistols, each magazine holds 10 balls, and the pistol probably had enough air for one magazine. 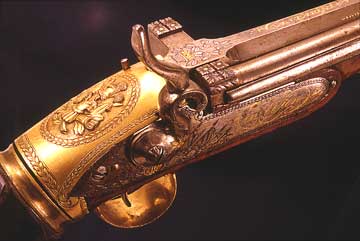 This photo shows the sliding shuttle for loading and the magazine tube on the right side of the receiver. Look at all that high-relief engraving!

These pistols are .40 caliber and rifled with a polygroove pattern. Each barrel is 7″ long, and the overall length is 13″. They’re numbered to match their removable butts (for filling with air) because this was before the time of interchangeable parts (ca. 1815). Being civilian models, these pistols have a decocking feature that the Girandoni rifle does not have. They can be uncocked without firing, while the Girandoni must be fired if it is cocked. 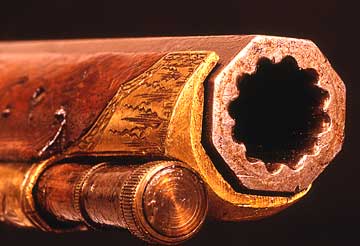 How’s this for deep rifling? It’s typical for this period.

The level of engraving and materials indicates these two were made for either a wealty person or nobility, if not for royalty. They don’t seem to have a royal crest, but whoever they were made for was definitely a wealthy man.

I think it’s good to look at airguns like these from time to time, if only to remind ourselves that everything was not invented in the last 10 years. 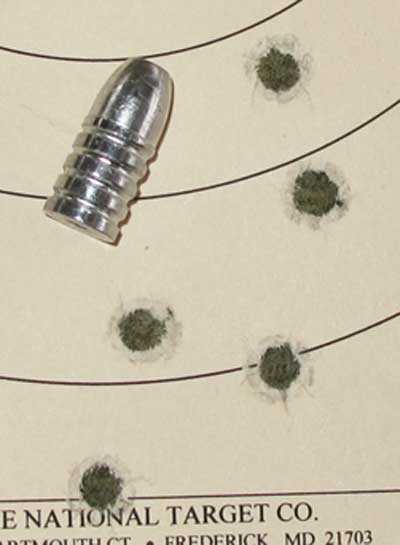 A range day with BB