Today’s post was suggested by Lego-man, who didn’t understand where the two zero points for an airgun scope came from. I would normally have directed him to the post on determining the range at which to zero your scope, but that was where he asked the question. So, the words weren’t getting the idea across. And, if one person asks, there are 10 more who don’t bother to. Today, I’ll draw some diagrams.

Here is the question: Ok..Im new to this air rifle thing, How do you get 2 distances from one scope? Also what is the best kind of range to zero in at?

The answer to this question, or I should say the science behind the answer, is obvious once you understand it. But until that time, you might wonder why I keep talking about two sight-in ranges.

Once a bullet leaves the muzzle of the gun, it starts falling to earth. How the barrel is oriented to the ground (i.e., is it pointed up so the bullet first rises, or is it parallel so the bullet drops right away) plays a large part in determining how long it takes the bullet to hit the ground. But gravity always wins. Even when the bullet appears to be rising away from the earth, gravity is still acting on it to pull it down. And, I expect everyone knows all that.

You probably also know that bullets, typewriters and Jell-O molds all fall at the same rate. If our gun barrel were exactly parallel to the earth and if a bullet were dropped beside the gun at the moment it fired, both bullets (the dropped one and the fired one) would hit the ground at the same time. The fired bullet would be some distance from the muzzle of the gun when it hit, but it would fall at the same rate as the bullet that was dropped.

For this discussion, I’m omitting subtle aerodynamic forces, such as the Magnus Effect, that could actually change the time of the fired bullet’s impact by a miniscule amount. Certainly these forces do exist and do affect the flight of a bullet; but for the purpose of this discussion, I’m overlooking them. I don’t believe their contribution amounts to enough to consider.

One more thing you all know is that bullets, and especially diabolo pellets, slow down the farther they travel from the muzzle. The farther they go, they more they slow down. That makes the pellet’s path curved toward the ground; and the farther out you go, the more curved it is. 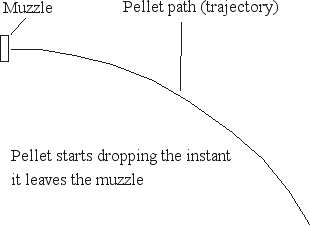 All I’m showing here is a visual of the pellet’s trajectory described above. The scale on these graphics is way off, because 5″ wide is all Blogger allows as an image size. Look at them for the relationship, not as an exact representation.

If you understand the first graphic, let’s see what the scope and open sights are doing while the gun is firing. 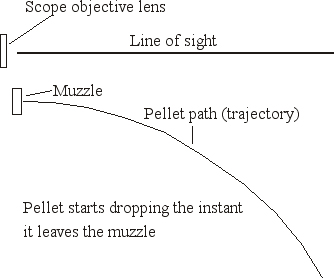 The scope is mounted above the rifle, and looks straight out to infinity. What we have to do is realign the scope so it coincides with the trajectory of the pellet.

Graphic No. 2 is also easy to comprehend. The scope looks straight while the bullet is always dropping. What we need to do is adjust the scope so the two can work together. Once again, it’s important to understand that this compressed drawing is really played out over many tens of yards of distance. Here’s the final graphic. 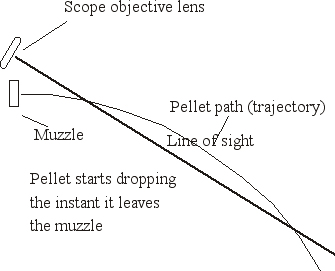 The scope has been adjusted to look downward through the trajectory of the pellet. This is done when the rifle is zeroed. The range at which the rifle is zeroed is that first point where the straight line of sight and the curved trajectory coincide. At that spot, the pellet will be striking the target at the same place the crosshairs are resting.

Obviously, the graphic is way out of scale. In real life, the amount of downward slant is very minimal on most airguns. In fact, if you don’t use adjustable rings, the scope itself isn’t slanted, but the erector tube inside is. On some of the Dianas that use an adjustable scope mount, you can actually see the scope pointing down. But it does point down on all airguns, because if it didn’t, you could never hit the point of aim.

Do you see that the pellet now appears to rise above the line of sight? Of course it doesn’t, but that’s what it seems to do. And then farther out it seems to drop back to the line of sight once again. Now you understand what is actually happening is that the pellet is always dropping. By aligning the scope as we did, it only appears to rise and then fall.

If you go back to that old post of mine, you’ll see that I give the advice to make the first intersecting point 20 yards from the firing point. Then velocity will determine where the second point falls. With a rifle that has 900 f.p.s. velocity at the muzzle and is sighted-in at 20 yards for the first intersection, it will intersect again at around 33-35 yards from the muzzle. You have to test on a range to discover where it will actually strike – and that’s true no matter what your velocity.

The amount the pellet “rises” above the line of sight with this method is about one pellet’s diameter or less. That gives you a zone of 20-30 yards at which your rifle is zeroed without any scope adjustment.

This type of zero works for airguns at close distances and is due to the separation between the scope and the barrel. If you zero an airgun at 50 yards and farther, you can kiss off this technique. Field target competitors stumbled on it because 20-30 yards is where many of their targets are located, so they learned to sight-in this way.

I hope that’s now clear to everybody.

88 thoughts on “Why are there TWO zero points when sighting in a scope?”