Before I begin, a couple of announcements. First, the latest podcast is up. This time I answered questions instead of following my normally scheduled material. There were too many questions sent in since the last podcast, and I didn’t want to make everyone wait for months to get answers. I think a lot of the questions came to the podcast because I use my real name there and people thought they were getting a better answer somehow. So please, if you have questions that are very specific, ask them here in the comments section. Ask more general questions on the podcast.

Second, there have been a few requests for me to review the Benjamin Super Streak breakbarrel that I have. I’m holding back because the rifle won’t be available until late December. That’s available ANYWHERE – not just here. I will review it in advance of arrival, but not this far, because the demand that might be created cannot be satisfied.

Powerful reactions to the Webley Typhoon!
Today’s subject, the Webley Typhoon air pistol, has already received several customer reviews on the website, and if you read them you’ll see that most reviewers don’t care for the gun. So I wondered, “How bad can it be?” I’m the guy who reviewed Chinese airguns in print back when nobody else would have anything to do with them, and I criticized them more than anyone except some hotheads on the forums. But even then I found some things to like on certain guns. So it is with abundant curiosity that I begin this report.

This pistol is made in Turkey and there wasn’t a similar model before the move. Webley did have a Typhoon years ago, but it resembled the Hurricane – a different pistol altogether.

Physical appearance
This pistol is both large and heavy. With the cocking aid attached, as I’m sure it is meant to be while shooting, it weighs 3 lbs., 4 oz. and has an overall length of 18.25 inches. The discrepancy between these measurements and the specifications given on the Pyramyd Air website are no doubt due to the fact that I left the cocking aid on the gun to take them. The somewhat small grip sits well below the spring cylinder, which sets up the pistol for a lot of torque when it fires. I’ll see what the “semi-recoilless” feature does to deal with that. 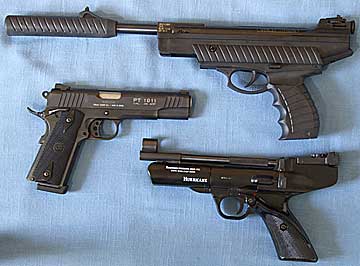 The new Webley Typhoon (top) is much larger than an M1911A1 firearm (below) or a Webley Hurricane air pistol (bottom).

The grip frame and cocking aid are both matte plastic, and the powerplant is blued steel. For the price, this looks like a good value. The front sight is also plastic, and the front blade is spring-loaded to push down out of the way if your hand contacts it during cocking. The rear sight is mostly plastic and has a strange windage adjustment method I will explain.

With the cocking aid removed, the pistol is somewhat shorter.

Adjusting the sights
The rear sight does all the adjustment. The elevation wheel is in the rear of the sight and has a smooth, even click adjustment. The windage is strange, however. The sight notch rests on a semicircular base and that rotates as it’s adjusted. As the notch moves to either side, the width of the notch becomes narrower, which is odd. Also, when the sight is adjusted all the way to either side, you can see that it is out of alignment, which give you a strange feeling when sighting. Let’s hope it doesn’t need much adjustment. 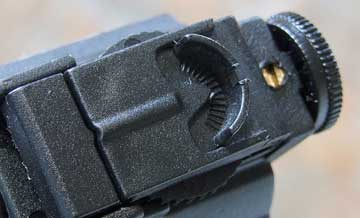 The semicircular rear sight notch rotates to either side when adjusted.

How does the semi-recoilless feature work?
The grip frame is in two pieces. When you fire, the top part that contains the spring tube moves while the bottom part remains motionless. Does it work? Well, when I fired the gun I felt none of the torque I was anticipating, so yes, I have to say it does work. However, when I compared it to my Webley Hurricane pistol that has close to the same power, it also moves very little. So I believe this feature does work, but that it is required for this gun because of the grip design. Other air pistols don’t need it to achieve the same lack of recoil.

Heavy trigger and lots of vibration!
My trigger-pull gauge stops at 8 lbs. and can be extrapolated to 9. It couldn’t release the trigger, which I estimate at 10-11 lbs. or about the same as the Logun S-16S. For a pistol that’s too heavy because it makes the gun difficult to control.