You guys are really pathetic about surprises! Several days ago when I mentioned the big surprise that’s coming, I was not expecting all the whining that resulted. Therefore, I have decided to give you a surprise today in hopes that this will hold you until the big surprise, which relates to the Gamo Whisper. Today’s little surprise is an AirForce Condor that’s quiet! And to tell the truth, I’ve been wanting to share this one with you for over a month, so I guess I’m just as pathetic as the rest of you.

How quiet?
How quiet, you ask? Well, now that you know who I am I can tell you that I’ve been writing a series of articles for Shotgun News about the Ruger 10/22. One of the articles was how one goes about buying a legal silencer. I bought one for my 10/22, and the one I got – the Pilot – is the quietest permanent silencer on the market. There are quieter silencers that self-destruct as you use them, but for long-term use, the Pilot, at 41dB reduction, is the champ. Even then, though, using the silencer on my 10/22 and shooting just CB caps, which are powderless .22 rimfire rounds that have even less energy than a .22 short, the Condor is quieter when fired at medium power. That’s how quiet. Imagine a Daisy Targeteer pistol shooting at 30 foot-pounds and you’ll have an idea of what I’m talking about. You cannot hear any muzzle report. All you hear is the striker hitting the bolt and the valve return spring.

How do they do it?
The device that does this wonderful thing is a frame extender that encloses the Condor barrel. When it’s on, the extender becomes part of the rifle’s frame and redirects the energetic muzzle exhaust back into the tubular frame where it looses energy fast. An end cap strips off the air and directs it to the rear, similar to how the end cap of the Talon SS works, only this one works better. The length of the frame extender, which the manufacturer calls a moderator, joins with the hollow frame of the gun to provide a large space for the air to expand and lose energy. The device extends past the normal Condor muzzle by about 6″, so there’s plenty of length and the Condor takes on the profile of a witch’s broom.

Installation
This device replaces the standard Condor muzzle cap. Loosen one Allen screw, remove the old cap, then slip the new extender in place. It takes about 30 seconds.

Accuracy
The device has no effect on accuracy. I did enough field testing to see that it was essentially neutral, though a small shift in the point of impact might be expected – especially at long range. Once you try this thing, you’ll never take it off your rifle, so just sight in once and enjoy. 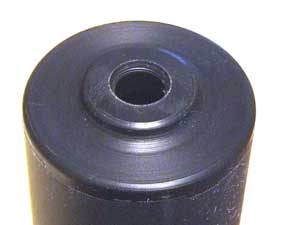 End cap does the same job as the Talon SS end cap.

What about the Talon and Talon SS?
There are devices to fit those rifles as well. They are proportionally sized for the guns they fit, because you don’t want the small hole in the end cap too far from the muzzle of the barrel, or you risk hitting the cap on the way out. As for how much quieter a Talon SS can be, I doubt it will be any quieter at all. I think the Condor dialed to lower power (30-40 foot-pounds) is already as quiet as any pneumatic rifle can be

And the cost?
The Condor device retails for $175 plus shipping. That’s not cheap, but real performance seldom is. The device is only available from Airhog at present, though Pyramyd Air may also offer them in the future.

So there you are – a real surprise for you, and one I know you AirForce owners will embrace.

89 thoughts on “SURPRISE! A quiet Condor!”