Before we begin, here’s a new video test by Paul Capello, of the RWS Diana 460 Magnum.

Today, I’ll report on the accuracy of the gas spring-converted Webley Patriot, and, oh my gosh! I don’t get a gun that shoots this naturally very often. When it happens, it’s quite a treat. Before you run to the forums and claim that I said the .25 caliber Patriot is a tack-driver, stop and read the entire report!

Sight-in
I usually sight-in starting at 10 feet, so the size of the group doesn’t matter or even count. BUT, seldom do I put two pellets through the same hole and not see where the second pellet went! I’ll accept that as a good sign of things to come. The pellet I used was a Beeman Kodiak, of course. Other pellets simply don’t do well in a Patriot or a Kodiak, but the 31-grain Beeman Kodiak performs like it was made for the gun, which, of course, it wasn’t, but could have been. (It was made for the Weihrauch EL54, an ether-injected rifle.)

Scope
A Leapers 3-9×50 scope with a red/green illuminated reticle was mounted on the rifle. This particular scope has a fine reticle with tiny mil-dots, so it’s easy to aim with precision. I mounted it in a B-Square AA adjustable one-piece mount that remained rock-steady throughout my velocity testing back on Dec. 19 and again in yesterday’s accuracy tests. I’ve installed the ultra-high riser kit on mine, so scope clearance is never a problem. Mounted correctly, this solves all your scope misalignment problems. The only reason my groups are not centered on the bull is that I didn’t take the time to adjust the scope or mounts. After a quick sight-in, I went to town.

Firing behavior
I’d forgotten what a pleasure this Patriot is to shoot. Gone is the heavy recoil and stunning vibration. Just a solid “thunk” and a forward jump. You’d swear you were shooting a rifle with 20 foot-pounds instead of almost 30! The trigger had one spot of creep but was crisp after that.

Good groups from the start
I used the new artillery hold with the rifle balanced on the back of my fingers. The first group had an inch of vertical stringing, so I slid the rifle forward until I was touching the triggerguard. The rifle was very muzzle-heavy at this point, but the pellets started sailing into the same hole, shot-after-shot. From then on, I knew exactly what the rifle was doing. 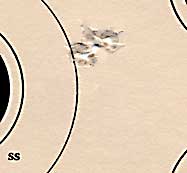 An unintentional group of 6 or 7 Beeman Kodiaks at 21 yards clustered into this group measuring 0.349″ c-t-c.

The first good group, which wasn’t supposed to even be a group, was the best of all. I shot six or seven times into the same two holes, not caring to stop until I realized what I was doing.

Then, I shifted to other bulls and began lobbing the Kodiaks in. I couldn’t miss! The technique was easy to repeat and the rifle shot like a champion. That said, a .25 caliber air rifle cannot compete with .177s, .20s and .22s. The pellets are just not up to it. But, when you smack a larger animal with a quarter-inch pellet, he knows it and he stays smacked! No acupuncture here! The .25 is for hunters, and this gas-spring Patriot is a good one to have! 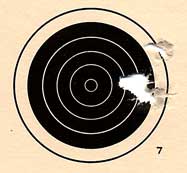 This group of five Kodiaks looks more like the average group at 21 yards. It measures 0.592″ c-t-c, with four pellets going into a hole measuring 0.372″.

Other pellets
I tried both Diana Magnums and Beeman Ram Jets, but neither was anywhere near as accurate as the Kodiaks. I wouldn’t waste my time with them if this is your only .25-caliber rifle. I’ve pleaded with Crosman for the past eight years to make a .25 Premier, but no luck. Until a top maker like JSB decides to make a better pellet, the Beeman Kodiak made by H&N is the best game in town, in my experience.

How good is the Turkish Patriot?
I failed to mention in the first report that the converted rifle was made in Turkey. I see on the forums that there are some discussion about whether or not these rifles are as good as the British-made Patriots. I’ve tested both, and the Turkish rifles are NOT made as well as the British-made Patriots. They’re made BETTER! The internal dimensions (where it counts) are held to tighter tolerances inside the powerplant. That said, I can’t see any difference in accuracy between a British-made Patriot and a Turkish-made Patriot. The British rifles had a better polish on the exterior metal, plus the scope-arresting cross grooves were cut deeper. That’s about the extent of the differences.

Bottom line?
If you fancy a Patriot, get one with a gas spring. If you already own one, have it converted. It makes all the difference in the world.

54 thoughts on “Webley Patriot/Beeman Kodiak with a gas spring! – Part 2 Oh my gosh!”