I’m in Albuquerque today and all settled down for the evening.

The Zimmerstutzen was the ancestor of the 10-meter target rifle and extends back to at least 1840. Zimmerstutzen is the rough translation of “parlor rifle” in German. The first zimmer was powered by a percussion cap that propelled a small lead ball through a short rifled barrel. The barrel was located toward the end of what looked like a conventional long rifle, although only the final 8 inches of the barrel were used. The striker for the percussion cap, and later the firing pin that was used on cartridges, was very long – running from the rifle’s action to the rear of the short barrel.

American Bandel Zimmerstutzen from about 1870 uses percussion caps to power a lead ball loaded in a breech about 8 inches from the muzzle. Note that the hammer is attached to a long striker that runs up to this breech.

Breech mechanism of Zimmerstutzen from 1910 shows the loading/extracting mechanism that handles the fixed cartridge.

Course of fire
The course of fire was 50 feet indoors and always offhand. Because zimmerstutzens were associated with shooting Vereins (literally “unions,” but meaning clubs) where the summer was devoted to shooting outdoors at 200 meters with schuetzen rifles. In fact, a lot of American shooters think the word Zimnmerstutzen should really be spelled and pronounced zimmerschuetzen (it shouldn’t). It may have had its origins that way, but zimmerstutzens soon developed their own rules and evolved into a different sport. 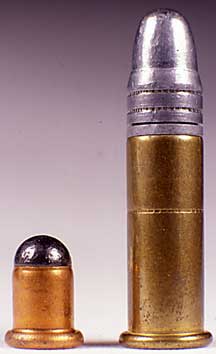 Fixed 4.3mm Zimmerstutzen cartridge (left) next to a .22 long rifle. The zimmer round uses a primer, only.

Characteristics
By 1890, zimmers usually had double-set triggers, superfine adjustable aperture sights and stocks that defined the breed. A high, cupped cheekpiece and usually a thumbrest were common features, as was a deep hooked buttplate. By the year 1900, the Zimmerstutzen had evolved to its highest level and would remain that way until the start of World War I.

Caliber
A Zimmerstutzen comes in the nominal caliber 4mm, but in fact there are over 25 discrete calibers that range from 4mm to 5.55mm, in half-milimeter increments. They also come in fixed and separate ammunition. The fixed ammo looks like a standard rimfire cartridge. It loads, shoots and ejects just like a rimfire cartridge. Of course, all target-shooting zimmers are single-shots, just like 10-meter rifles of today. Target shooters believe that top accuracy comes from precise loading directly into the breech, and they get that partly from the Zimmerstutzen heritage.

Accuracy
This is where the story gets interesting. When I was a boy in the 1950s, Zimmerstutzens were revered for their accuracy. Had they shot groups in targets instead of single shots, their groups would have been around one-tenth-inch for the best shooters. Wonderful accuracy for 1955, mundane after about 1985. Today’s 10-meter air rifles can out-group a Zimmerstutzen by about 50 percent, if not more. Of course the distances at which they shoot are different, but that doesn’t explain the difference in accuracy. It’s really velocity and the accuracy potential of a diabolo pellet. A round ball cannot keep up, and the Zimmerstutzen typically shoots around 1,000 f.p.s., while the air rifle does about 580.

In the next installment, I’ll show you some more unique things about Zimmerstutzen rifles and tell you where they went when the 10-meter rifles displaced them.

31 thoughts on “What came before the 10-meter rifle? – Part 1Zimmerstutzen”