Guest blogger
Here’s another guest blogger. Joe G. from Jersey tells us his tale of discovery with a new/old airgun. I liked this story because of my own experience with the very same model.
If you would like to write a post for this blog, please contact me at blogger@pyramydair.com.

Bloggers must be proficient in the simple html that Blogger software allows, know how to take clear photos and size them for the internet (if their post requires them) and they must use proper English. We will edit each submission, but we won’t work on any submission that contains gross spelling or grammatical errors.

Take it away, Joe!

By Joe G from Jersey

Let me start by saying I enjoy air gunning. I love the ability to shoot whenever I like; garage space for me is ideal. One of the joys is looking for inexpensive guns and seeing how well they can shoot.

Over the winter, I had the opportunity to buy a brand new Crosman 2200. Crosman stopped production on this rifle around 2004. Well, I dealt out my $39 and was thrilled with the deal. 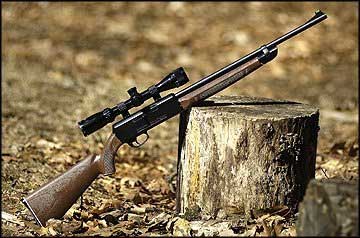 Just like any kid at Christmas, I could not wait to get home and try this old classic. I had a little time on my hands before my kids came home from school, so I opened the box, eager to see what it held. Wow! This is brand-new vintage stuff. I’m excited! Everything was looking good.

The first shot
This is where things started going down hill faster then a cheetah chasing an antelope at dinner time. I grabbed the pump handle and started the ritual every pneumatic pump shooter goes through. I’m thinking this is way too easy. Holding the gun gently, I squeezed the trigger and…no bam, no noise, no pellet leaving the barrel, let alone hitting the target. What the heck? This gun is brand new. What’s going on?

Gathering my thoughts and picking myself up off the floor after the huge letdown, I started by inspecting the pump lever. I noticed that it was disconnected from the piston. Ahhh, that’s why it was so darn easy to pump!

Giving it some thought, I figured that the oil had hardened and frozen the seal to the chamber while the gun was stored in its box for the last 3 or 4 years. Time to take my new gun apart. Thanks to Crosman’s parts diagrams and my mechanical ability, I felt confident I could fix this small mess. And I did.

I also had to use a little Crazy Glue on the pump head, where it attaches to the piston. Before that, it would separate from the pump arm if you pumped too fast.

The second “first” shot
The little Crosman was now shooting! Velocity with 5 pumps was 475 fps avg. with Crosman Premier pellets. Around 600 fps with 10 pumps. No air leaks after sitting.

On paper targets, though, things were looking bad, again. I was getting really bad flyers with various pellets. They looked like curve balls being thrown by a major league player. The Bushnell 3-9x AO scope that I’d mounted was removed, but I still had flyers using the open sights. We’re talking about shooting a distance of only five yards. Half-inch groups were opening up to 6-inch groups. I’m an average shot, but to yank shots 6 inches off target at that distance was almost impossible. A blind caveman couldn’t do it if he tried.

This time, I looked at the barrel. The crown looked like it had been chewed out by a beaver. I disassembled the little beast, again. I removed the last 1/4″ of the barrel with a pipe cutter and reamed a new crown with a countersink bit and J-B Non-Embedding Bore Cleaning Compound. The barrel now looked better than new. I knew it could not shoot worse than before, so confidence was high. During reassembly, I bedded the chamber block with J-B weld so it wouldn’t wiggle.

Success at last!
Back to the bench. The flyers were gone, and the rifle was shooting ragged 1-hole groups. At 10 yards, Premiers and RWS Superpoint Extras were holding 1/2″ to 3/4″ groups. Not a target gun by any means, but now it was fun to shoot and good enough to bag a pest here and there.

Bottom line: I like the rifle a lot. It was worth the price I paid and then some. And, the tinkering made it all the better. Hey, what fun is it if the little Crosman shot well without the work? 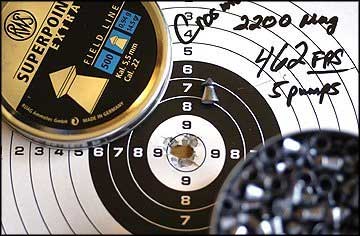 Here’s how it shot: