Home > Blog > Education / Training > Why do we collect airguns?

Why do we collect airguns?

I was reading the Yellow Forum recently and happened across a comment by an acquaintance of mine, Ted Summers. After his comment, he quoted something I wrote in the second Airgun Revue. I’d like you to see it, too:

Some day, every airgun in your collection is going to belong to someone else. You only “own” them for a brief period, and then they’re on the block again. Don’t fret about this – it’s how you got them in the first place. Think about it.

There’s a lot to ponder in that statement. For some reason, that’s exactly what I have been doing for the past few weeks. I look at what I have and wonder why I have it. At some point in time, each gun was important to me, but as I look them all over, many have faded to the background. So I have to ask myself: Why do I own them?

My first collection
I own 8 nice Daisy No. 25 pump BB guns, and I know why I do. When I was a kid, I bought a 25 for $5 from my sister’s boyfriend. It was a wonderful 1936-type engraved gun with lots of deep bluing and great power. But several days after I bought it, the power went away. In desperation, I disassembled the gun partway – for reasons I cannot fathom, because what was I going to do after that? My parents were against me owning BB guns, so I didn’t feel they would be sympathetic to this problem. After creating a basket case, I sold it to a friend for a quarter just to get it out of my life. Two days later, he returned with the gun assembled and shooting powerfully again. He told me his father put it back together then showed him how to oil the piston seal to make the gun shoot hard. That was insult heaped on my injured pride! 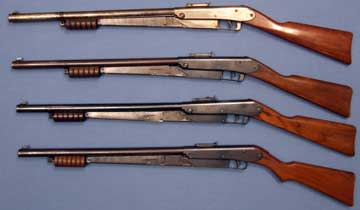 So as an adult, I have an attraction to the No. 25 pump gun. I’ve learned as much about them as I can, and I’ve tuned a couple in the process. Now I look at the 8 in my collection and see redundancy. I don’t need or even want all 8 any more. I’ll take a couple of them to airgun shows and sell them or trade for something I do want. The others I’ll keep, because that old wound is not completely healed.

Odd gun becomes an obsession
Another gun in my collection is a Kruger cap-firing BB gun from Wamo. Actually, I own two of them, and I’m in pursuit of the Western Haig pistol I wrote about last week. Wamo made that one, too. These aren’t even airguns in the strictest sense, because they use caps to propel the projectile. In a very distant way, they’re actually firearms!

The Kruger ’98 was Wamo’s idea of cleverly suggesting a Luger without copyright infringement. It used toy caps to propel either a BB or .12 caliber lead shot (they came in both calibers). 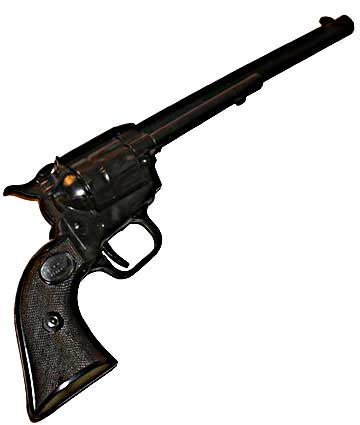 Western Haig wasn’t sold under the Wamo/Wham-o name, but the owner of Wamo held the patent on the gun.

My mother bought me a Kruger as my first BB gun. You can read about it here. It was a horrible failure as a gun, but it stuck in my mind like a homely classmate you can never quite forget. After I started writing about airguns, I became aware that Wamo also made a .22 rimfire single-shot pistol called the Powermaster. Then, through my airgunning friends Bob Speilvogel and Richard Schmidt, I discovered that Wamo also made two other different .22 rimfire guns they probably never advertised. When I contacted Wham-o (they now go by that spelling, but they’re the same company) to ask about the history of the Powermaster, they denied ever making it and insisted Wamo must have been a different company.

Wamo Powermaster was one of three different .22 rimfire firearms made by Wamo/Wham-o.

That transparent lie (which I can prove) lit a fire under me! As I researched the Powermaster, it became clear that no one has ever researched this story or documented many of these guns. Now I’m on a quest for information about the history of the company and about the six firearms they made (including the Krugers and the Western Haig). I’m compiling my research into a large article for Shotgun News this fall. I guess the point in this case is that you shouldn’t lie to a writer! And, I will not be parting with any of my Wamo/Wham-o guns in the forseeable future.

The unloved as well
Just as there are guns I cannot part with, there are others that leave me cold. I once owned a beautiful HW77 that had been tuned to a gnat’s eyelash. It was a rifle of which I was very proud. Then I got a TX200 that legendary tuner Ken Reeves tuned for me. It did everything the 77 did…just a little better. I let the 77 go. At the time, I said I didn’t need two perfect rifles. Then I got a TX200 Mark III that topped my Reeves-tuned Mark II and the Mark II went away. So, in the case of fine underlever field target rifles, I guess there is only room for one in my heart.

When I add up the 10-meter target pistols I have owned, people might get the wrong impression. I have at one time owned two FWB 65s, two Walther LP IIIs, A Walther LP 53, a Diana model 10, a Drulov DU-10, an IZH 46 and a Chameleon. Only the 46 and the Chameleon remain, and I keep them because I can compete with either one. The others were great collectibles, but not up to the task of a full 10-meter match for one reason or another.

I know collectors whose whole lives are wrapped up in their airguns, but I’m not like that. I do live to shoot, and I get to sample a lot of different airguns and firearms in the process, but it takes a special bond for one of them to stay with me. Perhaps the strongest attraction I have is to a gun that has never been reported, or to one that’s tied to my youth in some way. I suppose the attraction is different for everyone, but each of us has some compelling reason why we select the airguns we do.

This report was written especially for The Big Bore Addict, who’s now putting his collection together.