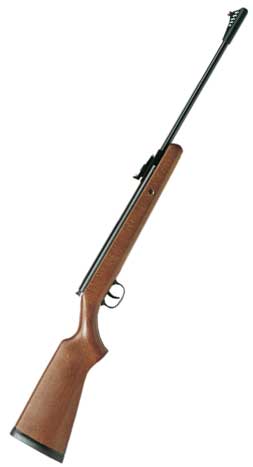 I asked for this rifle and RWS USA responded. The RWS Diana Schutze breakbarrel is an answer to my prayers for more and better youth-oriented spring rifles. I get emails every week from parents asking which model air rifles are suited to their kids. There are a few good ones at present, but the number has slipped over the past 20 years. With the magnum craze going full-bore, airgun manufacturers have taken their eyes off the youth market, yet that market is important for several reasons. First is the fact that we can never have too many good airguns for young shooters. They will probably stick with the shooting sports if they have early success, and a quality air rifle is just the ticket for that. But, there’s another, less-obvious reason that’s even more important.

Adults like ’em, too!
The market may be red-hot for testosterone-laden, supersonic, magnum spring rifles, but think of youth guns as the minivans of airgunning. Everyone uses them without comment. Long after the bragging rights have worn thin on that super-blaster, the shooter will remember a gentle shooting air rifle with a smile. Beeman sells the R7 on that premise. There were a lot of wonderful spring guns competing for honors in that category back in 1985; in 2008, the choices are fewer. Enter the RWS Diana Schutze. 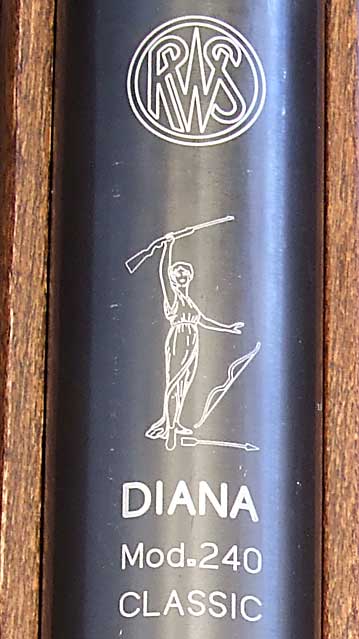 The name Schutze is not on the rifle. It’s the model 240.

Technical
I measured every one of the specifications I mention here. They may not be the same ones you see online. The Schutze is small in almost every way. The total length is just 40 inches, yet the pull is an adult-sized 14.25-inches. It will feel like a lightweight carbine in adult hands. The barrel measures exactly 16 inches. The rifle weighs just 6 pounds and cocks with 21 pounds of effort. I’d like to see that cocking figure reduced to 15 lbs. or less, but it’s a number I can live with. The ball-bearing barrel locking detent is stiff and will require a slap to open initially, but it’ll wear in and become super-smooth.

Trigger
The trigger is not adjustable. It’s two-stage with pronounced creep in the second stage. The pull is stiff, breaking at around 6 lbs. While that sounds heavy, remember this rifle is intended for young shooters, whose trigger fingers aren’t always as disciplined as they should be. No doubt, it’ll become smoother and lighter with use, but never too light. The specs say 5 lbs., which sounds about right.

An automatic safety is set every time the rifle is cocked, no different than any other Diana spring rifle. The safety button comes back from the rear of the receiver, so it’s a snap to take off with your thumb when grasping the rifle to shoot. It can also be reset at any time (cocked or not) and simply blocks the trigger from moving. 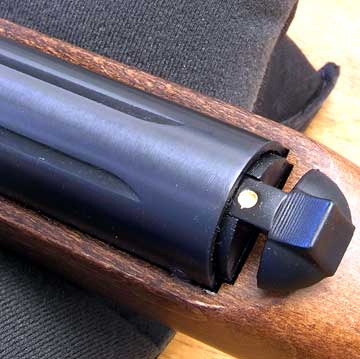 Safety sets when the rifle is cocked. Note the lack of a scope stop on the 11mm dovetail scope rails.

Stock
The beech stock is slim in all dimensions, which adds to the handy feeling the little rifle evokes when you hold it. The buttpad is a solid black rubber pad that keeps the rifle in place when it’s stood in the corner. The wood is stained a medium-to-dark brown and is finished smoothly all over. There’s no checkering, and the shape is completely symmetrical, making this model 100 percent ambidextrous.

Sights
The front sight is a hooded post with a red fiberoptic bead at the top. It sits atop a molded synthetic ramp with side vents for style. The whole assembly is attached permanently to the barrel and cannot be removed. With target lighting, the front sight bead goes dark, becoming a perfect square post.

The rear sight is a square notch with green fiberoptic beads on either side of the notch. Unlike the front, they do not go dark with target lighting and will continue to frame the front post in all light. The rear sight adjusts in both directions with crisp click detents. There’s a scale for the vertical adjustment wheel, but none for the horizontal.

There’s a scope rail, but it has no scope stop provisions. I’m recommending to RWS Diana that they drill and tap a hole for a simple mechanical scope stop, because shooters today tend to use scopes over open sights.

I was very happy to see this rifle at this year’s SHOT Show and asked to test it as soon as possible. Right after IWA (the European SHOT Show) finished in mid-March, the gun was sent to me. I plan on putting it through its paces because we really need more good youth guns. Adults are demanding them!