Today, we’ll look at the IZH 46. Before I do that, Derrick told us that Gamo U.S.A. sells grips to convert a Compact to left-hand operation. Indeed they do. Look on their website under ACCESSORIES.

The IZH 46, or Izzy, as some call it, is another single-stroke pneumatic target pistol. I don’t know how long it’s been in production, but I first saw them in the mid-1990s, when several dealers sold them in the U.S. at $600. That was a poor launch strategy because top-grade, name-brand, 10-meter pistols were selling for less than a thousand dollars at the same time, and the Russian gun had never been seen in this country.

When those dealers dropped out, the price fell rapidly through $300, coming to a stop at around $225. Then, it began to sell, and the word started spreading about its quality. I saw and shot my first one at the Little Rock Airgun Expo around 1996 and bought one in March of ’97. I still own that pistol, and it still works well. Those who say the seals are weak are mistreating their guns. This gun requires Crosman Pellgunoil often to remain operational. There’s also a trick to storage that I’ll show you that keeps the most fragile seal fresh.

Two different models
There’s an IZH 46 and a later version known as the 46M. EAA told everyone the M stands for magnum, which sounds reasonable because it develops greater power. A standard 46 should develop a muzzle velocity of 410-430 f.p.s. when shooting 7.5-grain wadcutters. The 46M develops 460-500 f.p.s. with the same pellet. The M has a longer pump tube that produces more swept volume (longer piston stroke), so more air is compressed. I’ve tested both guns extensively, because the 10-meter pistol club I used to belong to had several of each model. 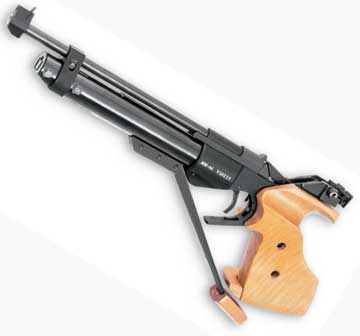 The IZH 46 is no longer imported into the U.S. 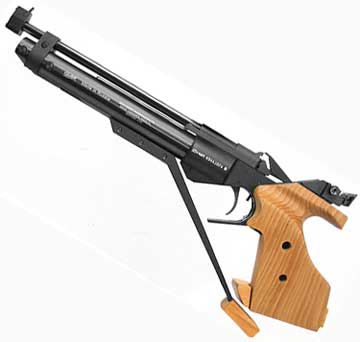 The standard 46 is still made, but no longer imported into the U.S. That makes sense, because almost everyone would want the M for its greater velocity.

Maintenance first
A ton of rumors have been written about how the seals in the 46 are somehow weak. Nothing could be further from the truth, but when kitchen-table hobby airgunsmiths open one up, they find a level of complexity they weren’t anticipating. You don’t change the seal to get a 46 shooting. You simply pump it – the right way!

Getting them working again
I have taken non-working guns and, through simple lubrication with Crosman Pellgunoil, gotten them shooting at or above the rated velocity in about 30 minutes. After watching me pump and shoot their guns repeatedly until they worked, the members of my club stopped having problems with their pistols. All you have to do is lubricate and exercise the seals until they’re flexible once more. I have to do the same thing with my own pistol every time I start shooting it again, because it sits around for 12 months at a time without being shot.

What kind of oil did I use? Crosman Pellgunoil! Will the synthetic oil your brother-in-law’s company uses to lubricate swimming pool heater pumps work as a substitute? Who the heck knows. But, Pellgunoil works every time. 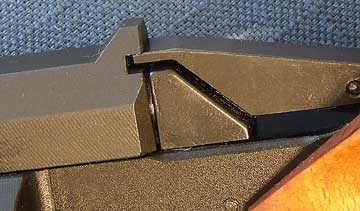 Only close the breech like this when you wish to fire the pistol. Never store it with the breech closed or you’ll ruin the breech seal. 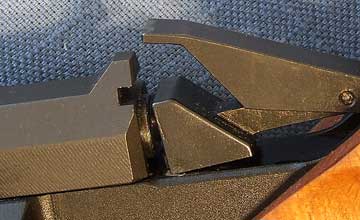 This is how the breech should look when the gun is stored.

Pump mechanism makes easy work
The pump lever operates with an articulated linkage whose fulcrum changes location as the force increases. The fulcrum also rides on two clever roller bearings that also serve as spacers. The result is an easy pump effort. The model 46 needs about 12-15 lbs. of force to close the lever; the 46M needs 20-22 lbs.

General specifications
This is a large target pistol, and one of the heaviest of its class at 40.5 oz. That’s what my 46 weighs. A 46M is slightly heavier. The balance is slightly toward the front, which most target shooters prefer. The geometry of a properly adjusted grip keeps this from becoming overwhelming. The length is 16.5″ overall. That seems large to those not used to 10-meter pistols, but it’s in the same range as many others such as the FWB 103 single-stroke.

Trigger
Here’s where the IZH 46 clearly surpasses the Gamo Compact. The 46 trigger is adjustable for location fore and aft (adjusts to the length of your trigger finger), adjusts for the length of the first-stage takeup, for the weight of the second-stage pull and for overtravel. In fact, the only adjustments you won’t find on this trigger are a side-to-side rotation of the trigger blade and the ability to load much of the total trigger-pull into the first stage The Izzy first stage is just a slack pull.

The 46 trigger also has a dry-fire capability that the Compact doesn’t have. You can manually raise the breech block until the trigger cocks, then close the breech and the trigger-pull is identical to what it is when the pistol is charged.

Grips
The grips now being imported are right-hand, but left-hand grips have been imported and can be gotten. The supply isn’t as regular as it could be, but they’re available. The grip adjusts just one way – by the palm shelf moving up and down. This is identical to the grip on the Compact. The 46 grip is smaller than the Compact grip and is made of what looks like birch.

Though it doesn’t adjust for cant or fore/aft angle, the grip is ideally angled to lock your wrist when the sights are aligned. The one complaint I have about the 46 grip is that the panels are difficult to get as tight as they need to be. I’ve solved this with my own pistol, but so many I see have grip panels that move when you grasp the gun.

Build quality
The IZH 46 is well-built. The finish isn’t in the same class as a top 10-meter gun, nor are the grips as well-sculpted, but you cannot criticize the construction. In contrast to the Compact, there’s no plastic anywhere. The only synthetics are the pump head and seals.

I plan to address the sights when I test each gun, because sights need to be used to be evaluated.