A few weeks ago, I let slip the fact that I have missed out on some wonderful airgun deals and several of you asked to hear about them. I asked .22 Multi-shot to remind me in two weeks and he did. So, today I’ll reveal how close I have come to the brass ring – with a couple good deals I did make thrown in for balance and to preserve my self-respect.

The Columbia Flea Market
I lived for many years in Ellicott City, Maryland, next to the planned community of Columbia. Columbia isn’t a center for the shooting sports, any more than Rosie O’Donnell is a candidate for the next president of the NRA. But, Maryland wasn’t always the center of anti-gun sentiment. Baltimore was the city where Samuel Colt had the first prototypes of his revolvers made and the State of Maryland has a very rich history on gun lore. Amid the gaggle of social planners living there now, there exists a wealth of valuable airguns. And, every Sunday there was a chance that one of them could surface at the Columbia Flea Market, held in the parking lot of the Columbia Mall. On Super Sundays, the place expanded 10 times its usual size, and the odds of finding something increased exponentially. So, walking in that hallowed hunting ground, here is what I missed.

Columbian and Bailey BB gun
No connection to the town of Columbia, the Columbian BB gun is a fine cast-iron BB gun from 1906. I saw one at the flea market for $60! Yes, friends, I passed by a thousand-dollar BB gun that was priced at a mere $60! Why? I don’t know any more than you know why YOU do stupid things. Oh, the shot tube was missing, so it wasn’t a thousand-dollar gun after all, was it? That was the excuse why I left a $600 parts gun on the table one Sunday. Perhaps, it was because I had just paid $75 for a Daisy Model 40 military gun (without bayonet) at another table and thought I should restrain myself. By that logic, if I ever see gold selling for ten dollars a pound, I’ll only buy a half-pound, so someone else can get a good deal, too. What a dope! I swear this is a true story.

1906 Columbian cast-iron BB gun. I may not have one of these, but at least I hung onto that $60 for about another week.

TWO Daisy Sentinels!
My stupidity knows no bounds! On this day, another Super Sunday, I passed on not one but TWO Daisy Sentinel BB guns. One was priced at $110 and the other was $100. I could have bought them both for $200. Instead, I demonstrated restraint and walked away $200 wiser and $2,000 poorer.

I passed on not one but TWO Daisy Sentinels. And, I’m allowed to vote!

Slap me ’til I cry, I haven’t got a brain in my head!
On no fewer than 10 different Super Sundays (more than a year’s worth), I walked away from a Markham King model D single-shot BB gun for $75. It was missing the shot tube and I just couldn’t reconcile paying that much for an incomplete BB gun. I examined it repeated times, but never could bring myself to spend the cash. Today, that parts gun would fetch $400 at an airgun show, no problem.

I handled the thing so often that it probably still has my fingerprints on it! But I showed uncanny restraint.

Have you lost all respect for me yet? I bet you thought I was going to tell tales of how I just missed buying an HW 77 for $250, or some trivia like that. No, folks, I have looked upon the sands of Golconda and said, “Those look like zircons.”

Now, for some good stuff.

A 1924 Crosman third model
I haven’t always been stupid. Once I got back into airguns, I quickly became aware of the various Holy Grails. One of them is a Crosman 1923 front-pumper, but an even rarer gun is an original 1924 underlever. Rarer than that is the third model I found and bought for $150. Later that same year I resold it for considerably more. Didn’t find it at the Columbia Flea Market, either. I found it at an airgun dealership!

Third model Crosman pump rifle is worth a bundle!

An 1872 Haviland & Gunn BB pistol
This WAS at the Columbia Flea Market and I passed it by (no surprise there). Later that day, my WIFE went back to the flea market with me, spotted this pistol in a display case and bought it for $5. These pistols now sell for $1,100-5,000, depending on condition. Oh, the dealer said he thought it was a carnival squirt gun. 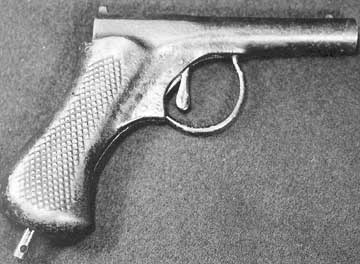 A Daisy 1894 Texas Ranger commemorative
Local pawn shop three years ago. I saw a Sheridan Silver Streak for $75 and had to get it. Then, the dealer mentioned a Daisy 1894 commemorative still in the box. I knew NOTHING about Daisy 1894s, and he wanted $100 for this BB gun, but I talked him into $150 for the Daisy and the Sheridan. This time I was just dumb lucky. The Texas Ranger 1894 is the top Daisy collectible from the latter half of the 20th century (I later found out). I re-sold it for $550 and sold the Sheridan for what I paid for it, so I did okay that day.

What have I learned
I have the instincts of Wrong-Way Corrigan when it comes to good airgun deals. However, every once in a while, even the blind squirrel finds an acorn.

All joking aside, I now study the Blue Book of Airguns, plus I watch certain trends. When Daisy made up the final 700 model 179 BB pistols from parts returned to them in the 1990s, I bought one. The day after they sold out, the price doubled and will continue to climb. However, I was also in on part of the Winchester commemorative rifle scam back in the 1970s, so I can recognize a bad deal when I see it.

Daisy 179. Seven hundred of them were assembled from returned parts in 2006. Those came in this box and are the most valuable 179s of all. Without this box, it’s just another $50 Daisy.

A couple free search tips
I also cruise the auction sites looking for stupid mistakes. I have purchased several Daisey BB guns off Ebay, even though their policy prohibits the sale of “guns.” But if someone is stupid enough to misspell the Daisy name, I’ll find it! I just passed on a “candle gun” on Gun Broker. There was never such a gun, but someone got a zimmerstutzen and made up a fanciful story about shooting out candles with it. So, he called it a candle gun. I could have bought it without opposition, because candle guns don’t exist (hence no one is looking for them).

So, that’s my sad/happy tale. There are other remarkable deals, of course. Like the time I bought an airgun and resold it for a profit in five minutes – at a gun show! But that’s for another time.