Guest blogger
Here’s another guest blogger. Vince Brandolini shows us how he shims a Diana breech seal to gain more energy. Vince has instructed several readers on this blog how to do this and they report similar velocity gains.

If you have an airgun story to tell, maybe you can tell it here. I’m looking for some budding bloggers who would like to help me write this blog. If you would like to write a post for this blog, please email me at blogger@pyramydair.com.

Okay, Vince – take it away!

I had gotten my first Diana rifle about 15 months ago – a wood-stocked RWS 34. I found it to be a bit of a disappointment in several respects and ended up selling it after a few months. One reason was the velocity; it generated under 14 ft-lbs at the muzzle. That’s no big deal, but the rifle certainly took more effort to cock than, say, my Gamo Shadow or Crosman Quest, either of which would handily out-power it.

Giving the 34 one more chance
Still, I did sort of miss the rifle. After hearing a lot of good things about the Panther variant of the ’34 (including BB’s review), I decided to take a crack at one. The example I got was a factory-refurbished model, and, frankly, all the reviews were right on the money. It was a much nicer gun to shoot overall, although the velocity was still low.

It didn’t worry me too much until I compiled a list of the mechanical specs of all my springers – including the potential energy stored in the powerplant when the gun is cocked. I then bounced that number against actual muzzle energy and found that all my guns came out at over 30% efficient – except for the Panther which came in at less than 28%. That didn’t sound right to me.

Huge increases in efficiency & velocity!
My suspicions were confirmed when I obtained a .22 caliber Panther a short time later, and it was lobbing Crosman Wadcutters under 600 fps (under 25% efficient). After some investigation, I found that shimming the breech seal resulted in a velocity over 700 fps. That made me wonder about my .177 Panther. So, I shimmed THAT breech seal and the velocity (10-shot average, 7.9 Crosman Premiers) went from 868 to 938 fps – a 17% increase in power and a new efficiency of 32.5%. Incidentally, the efficiency of the .22 is now close to 37%.

Dianas aren’t the only guns that could use a shimmed breech seal
When I found a similar problem with my very recently acquired Ruger Air Hawk (which is a BAM-built semi-clone of the ’34), I began to wonder if this might be a common issue.

How it looks on the inside
Below is what the typical Diana-type breech and seal look like (the pictures are from the near-identical Ruger Air Hawk). 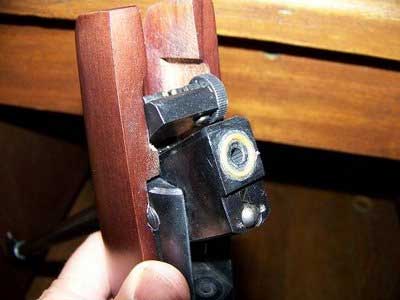 The breech reveals a simple o-ring pressed into a groove around the barrel opening. If you remove the o-ring, you may or may not find a factory shim under the ring. Both my Panthers had shims, while the Air Hawk did not. 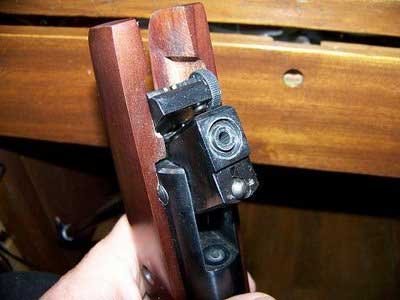 When you remove the o-ring, you may find a factory shim under the ring. Both my Panthers had shims, while the Air Hawk did not. 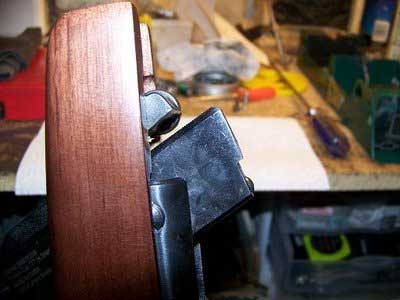 This is a side shot of the Air Hawk breech. There’s little protrusion from the breech face. That can lead to velocity loss!

Making & installing the shim is just about a no-brainer
This isn’t an expensive or time-consuming process and no mechanical knowledge is required, yet I found it was one of the quickest ways to immediately get a velocity increase. Let’s get to it!

The seal groove on the Ruger Air Hawk has a .540″ outside diameter and a .340″ inside diameter (measurements are approximate). 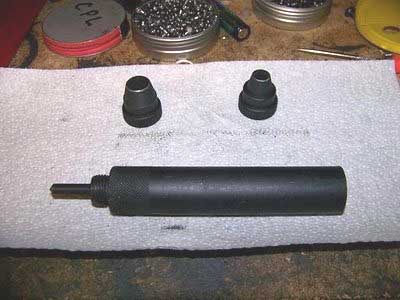 I was able to make usable shims with 3/8″ and 1/2″ hole punches. I had a cheap one with interchangeable heads.

The shim can be made out of a variety of materials. Diana uses steel, while Crosman (with a similar setup) uses a thick paper. I settled on plastic from a coffee can lid, which yields a pliable shim about .015″ thick, and aluminum from a soda can, which is about .005″ thick.

Making the shim is a simple 2-step process… 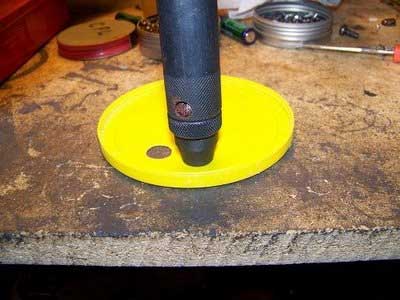 First, I used the larger punch to make the outside diameter. 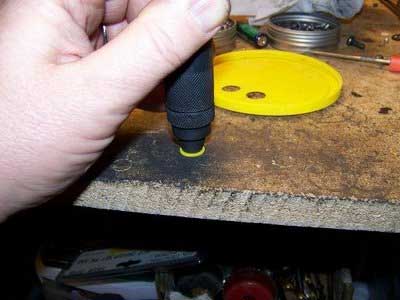 Second, I used the smaller punch to make the inside diameter.

The same procedure is used regardless of the material. If you use aluminum, the punching process will probably distort the ring, so make sure you hammer it flat before installing it. 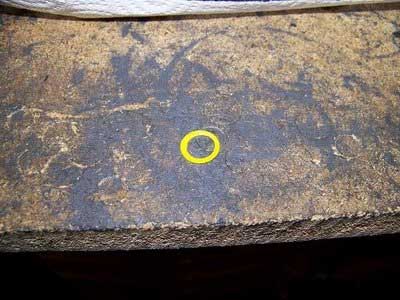 The tricky part is that second punch. If the tool isn’t centered properly you get an uneven shim that looks something like this. If it isn’t too lopsided, the shim can probably still be used (as is the case with this one), but it’s best to have the second punch centered as much as possible.

What if you need to replace an o-ring?
If you discovered that your gun’s o-ring is torn, gouged, ripped or in some way damaged because that’s how it came in the gun or because you did something when removing from your gun, you can buy a replacement. I checked into Umarex’s replacement breech seals, and found that they charge $4-5 for one. If you need only one, that might be the way you want to go. On the other hand, I was able to buy a bag of 100 McMaster-Carr o-rings for just $3. 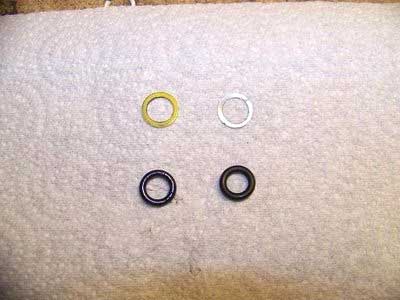 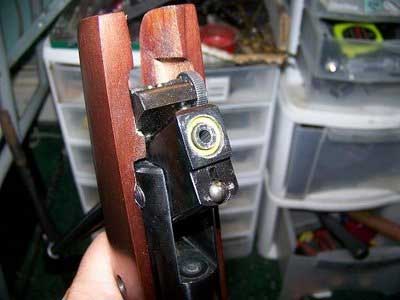 Once the shim is punched out, it fits easily into the breech groove… 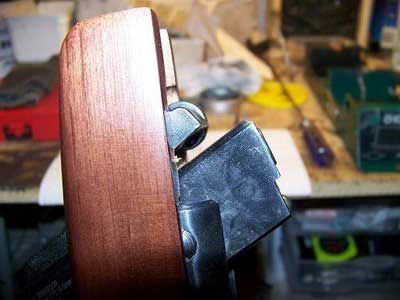 Yes, it’s still slower than my Panther, but the Air Hawk isn’t a perfect clone. The powerplant has a shorter stroke (by about 15mm) and a slightly softer spring. Out of the three guns I shimmed, this one improved the least. But, the improvement is unmistakable (it was observed over a series of several shots), and it brought the powerplant efficiency up to a reasonable 32%.

This naturally leads to the the question – how do you know if your rifle needs it, and how much should you shim? There’s no set rule. My Diana 350 didn’t need any shims, and frankly I don’t know of any way of telling beyond trial and error. There’s a “wax paper test” for a leaking breech seal: load the gun and put a strip of wax paper between the breech and the compression tube as you close the action. Fire the gun. If the seal leaks, it’s supposed to tear the paper. Perhaps this works in some cases, but it didn’t work for me.

That’s about it. I suspect that my first 34 (the one I sold) suffered from this problem. Plus, Hank wrote that his .22 Panther gun picked up 100 fps. 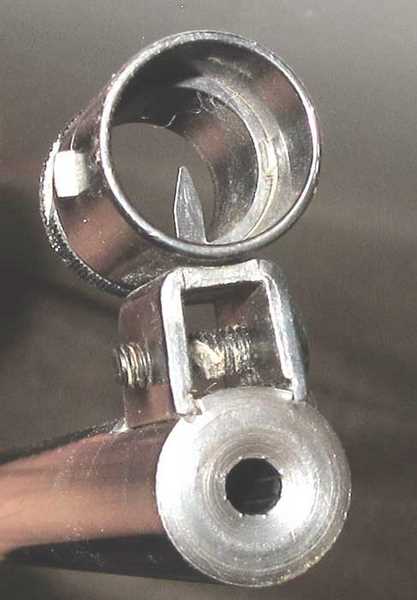