First things first. Reader K. Rihanek mentioned that the rear sight notch on his Gamo Compact was adjustable, so I read the manual and learned that it is. I have owned a Compact and tested several and never before noticed this feature. You can open that notch to almost double the width via a cleverly hidden adjustment screw on the sight. I’m showing you where it is in case you own a Compact. 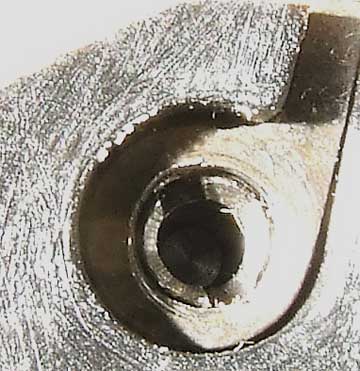 Gamo Compact rear sight notch adjustment screw (on the left side of the sight) is headless and hollow. I missed seeing it for 10 years.

This removes the biggest objection I have to the gun. It’s very easy to see a 6 o’clock hold now.

The 6 o’clock hold
Speaking of 6 o’clock holds, Matt61 was describing how he did his, which prompted me to start this series on 10-meter pistol shooting now. Matt was using a center hold, which doesn’t work at all for 10-meter. So, I’ll now show a true 6 o’clock hold. 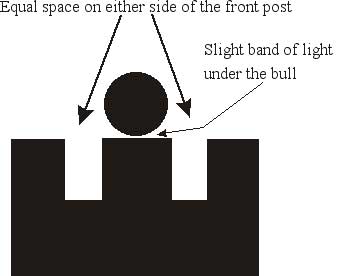 Now I know that thin sliver of light under the bull is going to unnerve many of you. I can see the comments now – “How thin should it be?” The answer is as thin as you can make it. This is a topic of great discussion among ten-meter shooters the world over.

Some say they don’t leave any light at all, but the majority leave a thin sliver so they can define the bottom of the bull above the front sight.

Please remember what a 10-meter target looks like and where the scoring rings are. 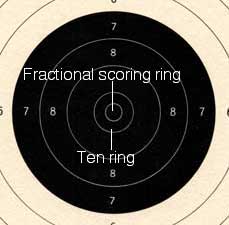 This is an official 10-meter target. Six o’clock means the extreme lower point of the 7-ring, which would be 6 o’clock if the black bullseye were a clock face.

Adjusting the sights
The sights are adjusted so the pellet ends up in the center of the 10-ring, and this is done while shooting offhand. No 10-meter competitor would dream of shooting his gun from a vice to sight in, because he knows the gun will shoot to a different point when handheld. Which begs the question, “How can you possibly sight-in a 10-meter pistol when you can’t even hit the center of the bullseye most of the time?” Think of it this way: Shooting 10-meter pistol is a lot like riding a unicycle. It requires a skill that most people don’t have. You just start trying and eventually you get better. Finally, you remain upright on the cycle all the time.

In 10-meter shooting, you start out with a sight setting that gets you the highest number of points. As you progress, you start noticing that although you’re shooting all over the 7-ring, your pellets are landing in the lower right quadrant of the ring more often than anywhere else. You make a sight adjustment to move the pellet slightly up and to the left. To your surprise, your 10-shot average score climbs from 74 to 81. The sight correction actually helped!

The importance of follow-through
This goes on until the day you notice that if you hold your sights on the target a moment after the shot breaks you can see where the sights were when the gun fired. To your surprise, you’re now able to “call your shots,” which means when you say a shot is high and to the left, that’s where it goes. All of a sudden, you start trying to follow through intentionally, and your average increases by three more points.

The front sight is everything
Then, a day comes when you notice the front sight has more to do with where the shot goes than anything else. Now, you start concentrating on the front sight to the point that the rear notch and the bull become blurry. The fact that you are 60 years old and wear reading glasses suddenly doesn’t matter anymore. You’ve discovered the SECRET! Your average score increases by another point. You’re now shooting an 85 for ten shots.

The next big thing to happen is that the trigger begins to break without your conscious effort. You’re lined up on the shot and the gun suddenly fires before you thought you were ready. It increases your score by seven points. You now shoot a 92 average, which means a score of 552/600 in a men’s match or a 368/400 in a women’s match. At this point, you’re an NRA Expert shooter and any advance from here will require a change in your thinking. Target shooting is a head game, the same as any championship competition. That’s why the books about expert marksmanship all sound like a lesson in Zen. You need to concentrate on the target to the exclusion of everything else. Please watch the movie The Greatest Game Ever Played or the movie For Love of the Game to understand what I’m talking about.

Wax on – wax off
For many of you, this report reads like new-age gibberish – except for the part about the 6 o’clock hold. In fact, this report actually is a condensed course in how to become a 10-meter champion. But you’re not ready for that, yet, so I’m giving you an assignment to watch what I consider to be the finest instructional video of all time on becoming a champion. Please watch The Karate Kid. When I say, “Wax on – wax off” from now on, I expect you to understand what I’m talking about.

Matt61, you asked me about my friend who became obsessed with 10-meter shooting. He read everything I wrote, and watched all the films I recommended, and, within 18-months, he was out-shooting me. My top average score with the NRA was a 535. That equates to an 89.16-point 10-shot average. My best individual score in a match was a 545. When I shot it, I was on the cusp of breaking through the 90-point barrier and moving from Sharpshooter to Expert in 10-meter competition. Then we moved and I lost my chance to shoot every day, so today, five years later, I’m lucky to shoot a 475. But I have been there and I know what it takes to get you there.

Rules of 10-meter pistol matches
A 10-meter pistol match is shot at 10 meters from the muzzle of the pistol. Because each shooter has a different arm length, it is physically impossible for them all to be exactly at 10 meters, so the firing line is set up so that no shooter’s muzzle will be closer than 10 meters. There will be differences of several inches among all the muzzles on line. Shooters don’t worry about that. They simply confirm their zero before the match and go with it. A few inches doesn’t make a difference with these guns.

35 thoughts on “Introduction to 10-meter pistol – Part 1An instant tutorial!”