Guest blogger
Rick Klages had an unfortunate accident that bent the barrel of his R9 Goldfinger air rifle. He asked me for advice and was surprised when I told him to just bend it back. This is his story. 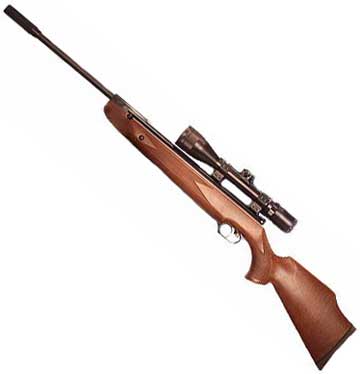 It’s an overcast July 4th morning, and I’m working on adapting my artillery hold to a prone position. Being humid and hot outside has led me to perspire, and laying in the grass has made my hands slick. Compound this with my failure to remove my wedding band (titanium), and we have all the makings of a classic breakbarrel stupident. I was cocking my R9 Goldfinger while laying on my left side and palming the muzzlebrake instead of firmly grabbing it, when my hand slipped off. I was very near the end of the cocking stroke when the barrel snapped closed with nearly the full force of the mainspring.

Not all bent barrels are as obvious as this R1. Anytime a breakbarrel snaps shut by itself, the barrel will bend upward at the junction of the baseblock. An average adult male should be able to bend it straight again following the directions Rick mentions below.

So, I picked myself up and started to take stock of what just happened. Ok, no broken wood, good. Everything else looks normal. But when I took a few offhand shots at 50′, I realized there was a problem. The point of impact had moved 4″ upward. Now what do I do? I could call Beeman, but this was a holiday! Tomorrow was Saturday, and there was no way I could wait until Monday to work out my dilemma. The barrel doesn’t look bent. So, I asked B.B. what he thought. This was what he wrote back to me:

Your barrel is bent. It happens every time a breakbarrel slams shut. You are lucky the stock didn’t crack, too, as that often happens. You have to straighten the barrel again. A friend of mine does it all the time and he says the barrel will straighten easily, but will resist going past straight. You should be able to see the bend, which is located at the front of the base block, by looking through the barrel.

I was a bit incredulous at the suggestion I could simply bend it back, but B.B.’s instructions were simple:

Straighten the barrel by bending it in the opposite direction. It’s best to take the action out of the stock for this and support the action on a solid table. Muscle power, alone, is all you need to straighten an airgun barrel. As you bend it back, you can feel the steel “giving.” It sort of shudders as it returns to straight. Once straight, though, it does not want to bend farther, so the resistance increases.

I decided to give it a try. I removed the scope and took the action out of the stock. Using my sturdy kitchen table and a large, clean terrycloth towel as padding, I broke open the action. As I placed the compression tube/receiver on the towel, I applied downward pressure on the barrel. The spring cocking lever bottomed out in the action and the next thing I felt was a slight shudder. I used a fair amount of force. Pushing harder resulted in no other sensation of movement. Even though the rifle has a safety that automatically engages upon cocking, I made sure to keep clear of the naked trigger. It may be prudent to remove trigger units, if possible.

I then reassembled my R9. So how did it go? Here is my reply to B.B. after all was said and done:

It worked! I wouldn’t have believed it really. I didn’t think I could bend a steel rifle barrel without a press and since I don’t have Superman on speed dial I was skeptical. So I tried it. I will now add “Bends steel rifle barrels with bare hands” to my resume. Best of all my R9 is back to normal. Thanks for the advice.