This test is for DH and for all of you who like to hear about fine PCPs. Pyramyd Air sent me a .22-caliber Webley Raider 10 some time back and it was working its way to the front of the queue when DH asked about it. This is the 10-shot model, not the 2-shot rifle.

Like a carbine
The Raider 10 is light weight at 6.6 lbs. and short, at just 38 inches. It’s really more of a carbine than a full-sized rifle, but that should make the hunters happy. The metal is evenly finished in most places, with a few tool marks showing through on the receiver and some dull patches on the reservoir. The finish is a medium shine that’s brighter than matte, but not the deep black of some other airguns.

The beechwood stock is highly figured for beech and as attractive as many walnut stocks. It is fully ambidextrous, as well, though the bolt action is suited to right-handed shooters. The raised comb rolls to both sides of the butt. The cut-checkered pistol grip has a slight Wundhammer palm swell on the right side, but lefties will not find it bothersome.

Shrouded barrel!
The Raider 10 has a fully shrouded and baffled barrel, so I will be making comments on the noise signature. The power is not adjustable, and there are 10 pellets in each clip (which the owner’s manual calls a magazine).

Dealing with the fill adapter
I thought I’d do something new with this test. I’ll show you what I do when I receive a new PCP like this. The Benjamin Discovery and any AirForce rifle can be purchased ready to go, but no other PCP comes that way. Inside the package with the gun comes a fill adapter. In the case of a rifle from the UK, it’s threaded to screw into a 1/8″ British Standard Parallel Pipe fitting (BSPP). That’s a standard among UK PCPs. I own a Hill hand pump that has a hose that also has the other end of a 1/8″ BSPP fitting, so many folks would be tempted to just screw the two together. A lot of the time that would work, but sometimes not, so let me tell you what I do. 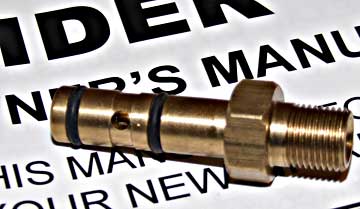 Would you know what to do with this adapter? This is what you get with most PCPs. It has to be attached to a hose that accepts 1/8″ BSPP threads. Those two o-rings need a light smear of diver’s silicone grease so they don’t nick or tear when inserted into the probe hole in the rifle.

Teflon tape
I wrap the threads of the quick-disconnect (probe-type) fill adapter with three wraps of Teflon tape (also known as plumber’s tape). If the seal in the hose is compromised in any way or even missing, this takes care of it. I wrap the tape in the direction opposite the one the adapter will be turning when I thread it into the hose. 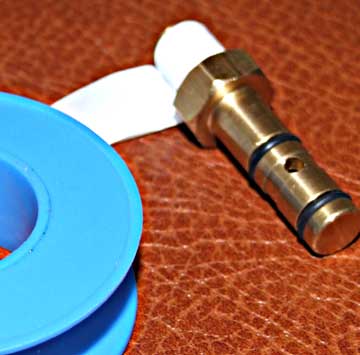 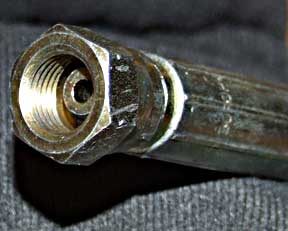 This female 1/8″ BSPP fitting on the end of a hand pump hose accepts the Raider adapter.

The two o-rings on the adapter get a light coat of diver’s silicone grease. Please don’t write me and ask what you can substitute for diver’s silicone. Just get some. A quarter-ounce jar will last a lifetime.

The rifle also has a plug to seal the fill port when the adapter isn’t installed. It has an o-ring, as well, so I also greased it.

Pump her up!
The Raider 10 took 128 pump strokes to go from completely empty to 200 bar. By the way, when the Hill pump gauge says 200 bar the pressure gauge on the rifle reads 150. That’s a difference of 750 psi! It’s a huge difference, but be aware that it can happen. I will use the pump gauge because it has worked well in the past. When I get to velocity testing, I’ll refine the max fill number by watching the chronograph to determine where the gun comes up on the power band. Yes, you need a chronograph to do this and, yes, it’s worth it.

The bolt on this brand-new gun is incredibly hard to cycle! I had to strike it with the heel of my hand to get it to work. The clip didn’t always index properly in the beginning, but I think both of these things will even out as the rifle breaks in.

Trigger
The two-stage trigger is adjustable for first-stage length, second-stage letoff and sear engagement. It seems nice enough as it comes from the box, so I’ll leave it as it is. There’s no safety on the rifle.

We’ll do velocity next.