Papers, please!
First, we’ll go over your homework. Your first assignment was to calculate the approximate average muzzle velocity of the Renegade in both single- and double-action. I didn’t give you any parameters other than the velocities recorded in that report. What I did with this problem was use the 42 shots I told you I would accept for the double-action mode. The range was from 916 f.p.s. to 975 f.p.s., and the average was 948.57 f.p.s. So, that was the average velocity that I got for double-action shooting.

Single-action
Calculating the single-action average was slightly more difficult, because I gave you only 12 acceptable shots to work with (the first and third strings of 6 shots), yet I told you I thought there were about 18 shots available. We’ll have to test that today to see if I’m right. To get the average, I added the first string and took the sum of the second string twice. Doing it that way makes a total for three stings of shots, even though one of them is just a guess.

I did it that way because the first double-action string used up some of the air before the second single-action string was fired. I figured the first shots of a real second string would, therefore, be faster than what was recorded, but the last shots would be slower. By using the slower string of shots twice (shots 13-18), I’d hoped they would account for the difference. Let’s see if I was right.

And, when we move up to Kodiaks
Moving up to Beeman Kodiak pellets, I’m guessing that the rifle will average 32 foot-pounds in the double-action mode and 37 foot-pounds in the single-action mode. That’s just a gut-feeling guess with no formula behind it, but I note that blog reader Malan is guessing that Kodiaks shot single-action will produce just under 35 foot-pounds, so we’re in pretty close agreement. Only testing will tell!

Stop and think
Before I do the test, let’s look at the Renegade for a moment. It gives you a fast double-action shot possibility in return for a reduction in gross power in both the single-action and double-action modes when compared to the standard AR6 rifle. The AR6, which functions only in single-action, delivers power in the mid-50 foot-pounds region. So, there’s a very clear difference between these two rifles. And, the standard AR6 will continue to be offered just as it has been.

What do you want?
What you have to decide is if fast repeat shots are more desirable than sheer foot-pounds. Of course, we still have to take the Renegade to the range, so accuracy is still unknown, but we know a standard AR6 will group 5 Eun Jin pellets in an inch or so at 50 yards. Which brings up another question. Why haven’t I tested the Renegade with Eun Jins?

Well, I will test Eun Jins in the Renegade, but given the performance of the rifle (i.e., a mid-30 foot-pound rifle), I figured that Beeman Kodiaks would deliver better velocity for making those long-range shots. I’ll test Eun Jins for accuracy, as well, so no stone will go unturned. Remember that I warned you this was going to be a HUGE report! Let’s get to it.

The average velocity for this 24-shot string was 1018 f.p.s., which is a muzzle energy of 32.91 foot-pounds. My estimate of the single-action muzzle energy by interpolating the third string of shots was too high by 0.26 foot-pounds. More importantly, I was off on the total number of shots by five, if we accept my criteria of a maximum spread of 50 f.p.s. Had I stopped shooting at shot 18, I would have underestimated the average power a little.

Test 4: the single-action string with Beeman Kodiaks
This test demonstrates what the rifle can do with 21-grain Beeman Kodiaks. They fit much tighter in the chambers (remember, with this gun you load the pellets skirt-first), therefore they seal much better than the Premiers.

Trouble downrange
I stopped at shot No. 30, not because the string exceeded 50 f.p.s., but because I shot through the silent pellet trap! TWICE! Little bits of crap had been bouncing back at me from the trap with every shot, so when the first pellet went though it sounded the same. The next shot went through a little faster, though, and I knew at once what had happened. Below is what that looks like. I cannot blame the trap, because I used it wrong. You can bet I’ll use a heavy steel trap with this rifle from now on! 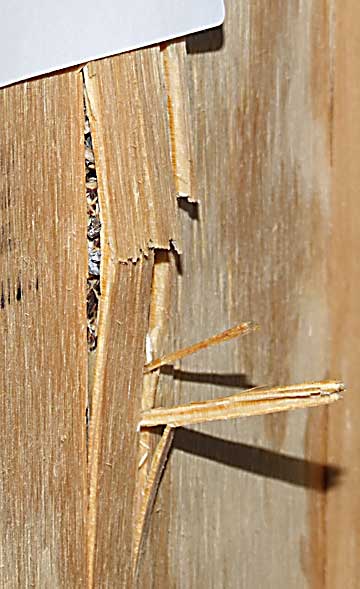 It’s only funny if it happens to someone else! This is what happens when you continue to shoot a 37 foot-pound air rifle at a trap rated for 20 foot-pounds. This trap has no steel backing plate and just a thin luan backer board.

A pleasant surprise!
These 30 shots are surprising because there are so many of them! Clearly, this rifle’s valve is better adapted to Beeman Kodiaks than to Crosman Premiers! The average for the 29 shots that did register was 887.14 foot-pounds. That works out to 36.71 foot-pounds, so my estimate was over the mark by 0.29 foot-pounds.

This report is getting too large, so I’ll stop here and finish the strings next time. Besides, I have to clean the splinters off my office carpet.