Time for something different today. I reported on the Crosman 1377 in August 2005. In those days, my reviews were terse and filled with less test results than I provide these days, and the 1377 is such a classic air pistol that I thought it was time for another go at it.

The 1377 is Crosman’s counter to the Benjamin HB 17/HB 22, which I evaluated for you 18 month ago. The 1377 sells for less than half the price of the Benjamin pistols, and I think we all understand that the difference is partly due to the materials used in the Benjamin. However, is there really double the value in those guns? Or, perhaps the question should really be, “Is the 1377 a terrific value?” That’s what this report will try to determine. 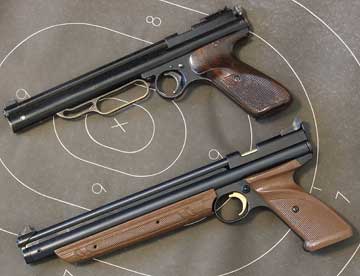 This is a large air pistol – make no mistake. The 10.25″ barrel guarantees a muzzle-heavy balance, though I must comment that it isn’t as much as you might think. The great size of the pistol also connotes power, and Crosman’s claim of 600 f.p.s. seems to back that up. We’ll see what the realistic velocity is with pellets you’re likely to use.

When I freed my test gun from its clamshell, it appeared that the pump mechanism was well-oiled from the factory, but that was deceiving. There was oil on all the pivot points; but the pump head was dry, and the gun didn’t develop much power when pumped. A liberal application of Crosman Pellgunoil to the pump head fixed that, and I was able to hear the gasp of air being sucked into the pump tube for the first time. That’s a sound all pneumatics should make.

Sights
The sights are fully adjustable, but you have to examine them closely. There are no click detents to alert you to adjustment changes. Instead, you must pay close attention to the position of the rear sight. The windage adjustment even has an index scale, but it takes some close examination to find it. 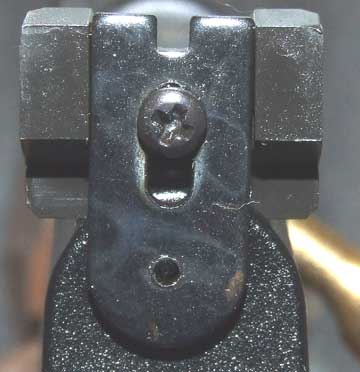 The 1377’s rear sight element adjusts for elevation, but there are no reference marks. The blade can be reversed for a peep sight! 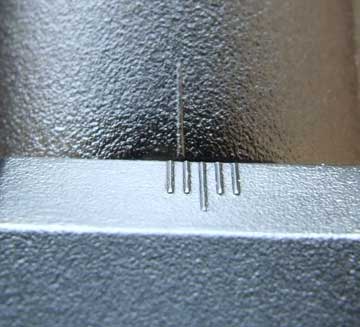 The front of the rear sight has a small index scale for judging windage adjustments.

Customizing possibilities?
Both the grips and the forearm are made of plastic and are the prime targets for customization. The grips are fully ambidextrous and, in a rare twist of fate, the bolt on the right side of the receiver favors left-handed shooters.

The trigger is a simple mechanism and is another target for change. Those wanting a $1,000 trigger on a $50 airgun find the market full of aftermarket possibilities. You just have to search for them, but they’re there. However, the $1,000 trigger isn’t going to happen with a 1377. Settle for less creep, a lighter pull and some overtravel adjustment. A wide trigger shoe is also nice.

Steel breech
For those who really want to go crazy, Crosman offers a steel breech for the 1377. This breech has 11mm dovetails for optional sights and/or a scope. By the time you’re thinking about the breech, you’ll probably also want to put on a longer barrel for more power. Then, the entire kitchen has to be remodeled! By that I mean that there’s almost no end to what you can do to a 1377 by way of customization. Your $50 pistol can transform into a mighty hunting rifle with the application of another $600 and a lot of elbow grease.

Scope or not?
These days, a scope is very popular on a gun like this. While a scope can get in the way of pumping on a shorter pistol like the Benjamin, the 1377 does have enough barrel for the Crosman 459 intermount to work, as long as the scope is a true pistol scope with long eye-relief or a dot sight.

Many of you have awaited this report for a long time. Let’s be sure and test those things about which you’re curious while the pistol’s in play.