Today I have something new for all you shooters who own or are considering buying an RWS Diana spring-piston rifle. It’s a new drop-in powerplant for the rifle, and its principal benefit is the elimination of vibration. It’s going to be called the Air Venturi Pro Guide spring retainer system, and the name is meant to describe what it does. Pyramyd Air should have them available for sale soon, so I’m going to take the extra time to give you a close look at the system and installation.

I chose a .22 caliber RWS Diana 48 sidelever for this report, though the Pro Guide system will fit the RWS Diana 34, 36, 38, 48, 52 and 54 rifles. I selected a sidelever because there are a couple of extra things that have to be done during disassembly/assembly. I want to show you those steps, so you can decide if this is an item you can install.

The RWS Diana rifles have been made easier to work on through the unitized T05 trigger module. While it isn’t as adjustable as the former T01 trigger, the T05 makes up for that by being very crisp and much easier to work with. It’s adjustable for the length of the first stage. When that stage ends, the trigger stops and breaks crisply when the second stage is completed. There’s no discernible creep in this trigger, and that’s held true for all the T05 triggers I’ve tested to date.

The trigger on the test rifle breaks at 2 lbs., 12 oz. which is pretty hard to beat in a sporting trigger. The trigger blade and safety slide are black plastic, and I know that displeases many shooters, but the fact is that it doesn’t matter that much. The way the T05 is designed, the trigger blade is just a lever that pushes on the metal sear. It’s under very little strain and plastic works fine. The trigger on the FWB 124 was originally plastic, too, and replacing it with an aluminum blade does nothing to improve the pull.

How the sidelever powerplant works
You have to understand how the sidelever powerplant works to appreciate what this new system can do. A sliding compression chamber is pulled back when the sidelever is rotated all the way to the rear. Inside the compression chamber, the piston is also pushed back until the connecting rod enters the T05 trigger and pushes the sear into engagement. Two generations ago, Diana used three ball bearings to hold the piston rod. They’ve eliminated the bearings but kept the central latching sear that it requires. You need to know that to appreciate the Pro Guide system

The patented Air Venturi Pro Guide has a spring retainer on both ends of the spring. The rear retainer (bottom) prevents the spring from buckling and holds a small amount of grease. It also damps any spring vibration. The front retainer is fitted tightly to the mainspring and damps any vibration instantly. The piston rod slides inside this retainer.

The front guide fits so tight within the mainspring that it’s a struggle to pull it off…not that you ever need to. This part slips inside the stock piston, which doesn’t even have to be removed from the rifle when the Pro Guide is installed. 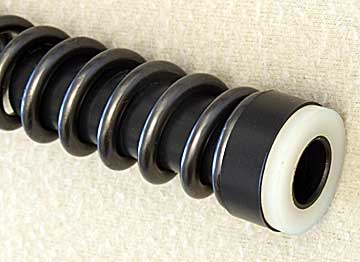 The front guide has a hole down the center, so it slides over the piston rod. 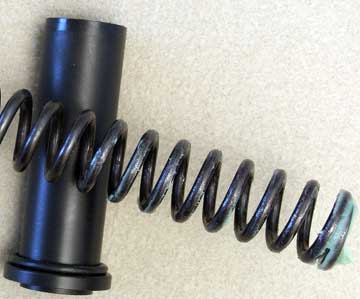 With the rear guide off, you can see what’s meant by a “small amount of grease.” Because the parts of the Pro Guide system are Delrin, you don’t need a lot of lube on the mainspring.

But that’s only half of the system. At the front of the mainspring, a second Delrin retainer is fitted tight inside the spring. A hole through the center allows it to slide over the piston’s connecting rod. Therefore, the mainspring stays tight between the walls of the deep metal piston and this retainer, allowing very little space for the mainspring to go. When the gun fires, this retainer also helps damp the spring’s vibrations.

What does it do?
The Pro Guide claims that it reduces powerplant vibration without resorting to button bearings on the piston, overly tight rear spring guides or heavy tar-like grease on the mainspring. I do note that the front guide of the system is equally tight on the spring as a rear spring guide from one of the tuners might be, but because the system comes with the guide installed, it’s of no concern. You don’t have to put it on. The claim, therefore, is that the install is easy. I’ll be testing that for you.

In this series, I’ll disassemble an RWS Diana 48 and give complete instructions plus detailed photos, so those who want to try this themselves can do so. It does require a mainspring compressor, so you may want to brush up on how they work. Read about how to build one here and also here. I’ll use the B-Square mainspring compressor I showed you in the13-part series on tuning a spring gun.