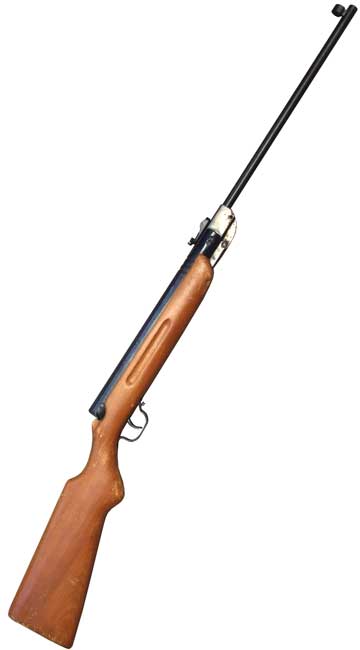 I thought I’d look at something old, something fairly uncommon in the U.S. The Haenel model III-284. This is a breakbarrel spring rifle made in East Germany in the 1950s and ’60s. The rifle is larger than a Diana 27, yet it seems to have roughly the same power. The cocking characteristics, however, are very different. While the Diana 27 cocks smoothly with even pressure from the mainspring all the way through the stroke, the Haenel 284 builds spring tension as the barrel pushes closer to the end of the stroke. Total cocking effort reaches a maximum of 30 lbs. close to the end of the stroke, then drops back a few pounds just before sear engagement. 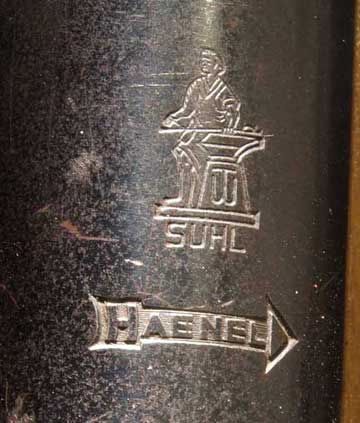 Haenel logo is an arrow with the name inside.

This rifle is a little larger than a Diana 27, at 43.5″ overall. A long 19.25″ barrel accounts for a lot of that length. The pull is a standard 14″ on the nose, so the rifle feels right for most adults. The weight of 7 lbs. even made it heavier than the Diana 27 and more in line with the BSF 55N I reviewed a few months ago. The wood stock appears to be beech and is finished without stain. My rifle’s finish is chipped and scratched, and age has crinkled the remainder into a rough alligator surface. There’s no checkering, but the forearm has a traditional European finger groove on both sides. The buttplate is blued steel, held on by two wood screws.

Pre-war design
Because the gun was made in East Germany, where things didn’t change very fast, it has several design aspects characteristic of pre-war airguns. The baseblock pivot bolt is locked by a setscrew that fits into a notch on the periphery. The cocking link is a 2-piece articulated link, so the cocking slot in the forearm is very short. The trigger adjustment, which is for the sear engagement only is external and runs through the triggerguard. 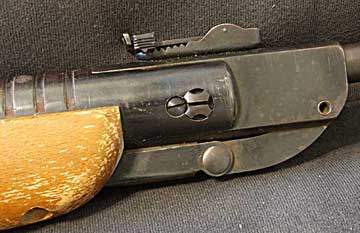 The head of the baseblock pivot bolt is notched to receive the head of a setscrew. This is a costly way to lock the bolt, but pretty common in 1950s guns. The 2-piece articulated cocking link can also be seen here. 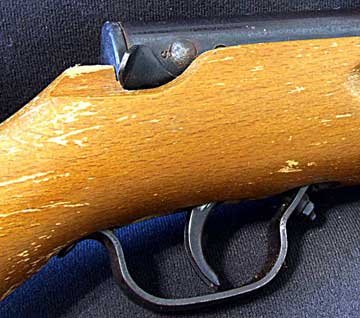 The trigger adjustment screw runs through the triggerguard. It acts directly on the trigger-sear engagement. That’s an old post-World War I design. The lever above the trigger is the safety, which comes on when the rifle is cocked.

The safety is automatic, but functioning is sloppy and it has to be taken off very definitely or it won’t go. It seems to block the trigger, but the gun can still fire regardless – a fact I discovered while adjusting the trigger, when the sear slipped before the barrel was closed. Fortunately, I was restraining the barrel, so nothing bad happened.

Trigger
The trigger is adjustable for the sear engagement, which is a potentially dangerous design. I set the second stage to break at 4.5 lbs., which is about as light as I will go with one of these triggers. I still have a pellet hole in the ceiling from when my BSF 55N went off too soon.

Because of the design and where the rifle was made, I felt it had to have a leather piston seal, so I oiled it through the transfer port with 10 drops of light machine oil. A squishing sound that’s characteristic of a leather seal soaking up oil was heard coming from the transfer port soon afterward. The breech seal is also leather, so plan to oil it, as well.

Firing behavior
This is a very pleasant rifle to shoot. While the trigger is crude, the firing behavior is quick, solid and without a trace of vibration. It feels like it’s been tuned, though I’m nearly certain that it hasn’t.

However, the rifle likes some pellets and hates others. Apparently, it requires a bore-filling pellet or it won’t develop any velocity. While Crosman Premier 7.9-grain pellets were traveling in the mid-300s, RWS Superdomes were very consistent at an average 656 f.p.s. The lighter Hobbys averaged 733 f.p.s. and were equally consistent. So, the gun has definite likes and dislikes in ammo.

Not only that, but I discovered that it only likes to be held upright. If I tilted the receiver to one side or the other when firing, the velocity went wild. Usually, that means down. I have no idea why it might behave like that. 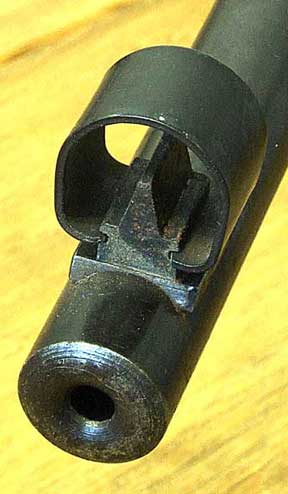 The front sight blade is a hooded peppercorn design. 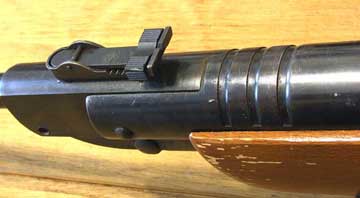 The rear sight has a slider for elevation. There’s no windage adjustment beyond drifting the front sight in its dovetail.

Accuracy is quite good with open sights, which is all you’re going to use on a rifle that hasn’t even the vestige of a scope base. But the open sights will nail a quarter at 20 yards, and that’s a 1″ target. It’s probably a real shooter, like a Slavia 631, but I can’t prove anything beyond plinking accuracy.

Where do you get one?
You don’t, plain and simple. Though there’s nothing earth-shattering about the 284, it’s extremely uncommon in the U.S. The one I have was a gift from the importer of a multitude of Haenel 310, 311 and 312 target rifles that a South Carolina pawnshop brought in over a decade ago. The Airgun Letter helped them put the word out about those rifles, which were sold by the hundreds in each model, and they gave me this one as a gift. It was in one of the shipments of airguns pulled from an ex-Stasi headquarters when East Germany fell. I didn’t think too much of it until a few months ago, when someone on the Vintage Airguns Forum asked about it and none of the advanced collectors seemed to own one. They ran a photo from a German website, so I responded with a short report on my rifle with some photos. That was the first time I’d thought about the rifle since receiving it back in the 1990s. Since I now remembered that I had it, I decided to let you take a look at it too.