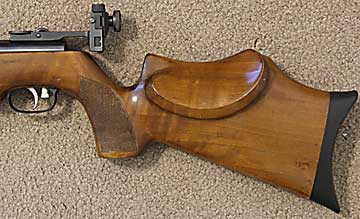 The deeply cupped cheekpiece is the Tyrolean signature. It positions your eye for the sights. 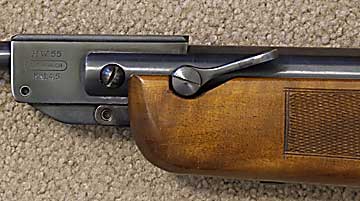 The lever locks the breech after closing. All HW 55 rifles have it except the rare SF models. Push forward to unlock the breech and backwards after loading.

Let’s take a look at a classic air rifle that captures the heart of most collectors whenever they see it. We have reader Wayne of the Ashland Air Rifle Range to thank for this report, because he graciously sent his rifle to me for testing; in return, I offered to tune it up and to give the rest of you a look at the inner workings of a fine spring-piston powerplant. This report will be a long one for two good reasons. First, I’ll be testing the rifle both before and after the tuneup; and during the tuneup, I’ll show you the guts of the gun. Second, I’m hoping that the longer I drag this out the less attached Wayne will be to his rifle, giving me time to find the means to wrest it away from him. Please don’t tell him I said that!

History
When I researched the history of the HW 55SF I got at the Little Rock airgun show this year, I discovered some things about the 55-series gun that I didn’t know. Yes, they began making them in 1955, but no – the famous Rekord trigger was not a part of the earliest guns made. I stumbled onto the American Vintage Airgun Forum while doing that research and came in contact with most of the top collectors of vintage spring airguns. I learned, for example, that the earliest HW55 rifles were hand-assembled and fitted and that each builder stamped his mark on the guns he made. Those guns are more carefully fitted than the later guns that have no special builder attribution. I also learned that the Rekord trigger that I thought went clear back to the first post-war Weihrauch guns was introduced after the 55 target rifles were in production. The earliest 55 rifles have a much simpler trigger that collectors refer to as pre-Rekord.

At the time the HW 55 began production, the target-shooting airgun world was still several years away from the first recoilless spring-piston actions. The emphasis was on firing smoothness – not on recoil reduction. The HW 55 went head to head with Walther’s target rifles. Both companies made very smooth guns that, in their final years, were nearly recoilless. The culmination for HW was the 55 Custom Match, a heavy breakbarrel that won the world championship in 1969. The Walther LGV capped off their run of fabulous breakbarrels. As a former owner, I can vouch for the fact that there is next to no movement when an LGV goes off.

The HW 55 Tyrolean, however, was a throwback to a different sport that used a different rifle altogether. The sport was saloon shooting (called parlor shooting in this country), and the rifle was a zimmerstutzen–a 4mm cap-powered firearm that was probably the sire of all target air rifles.

The zimmerstutzen was the predecessor of the modern target air rifle. It’s 4mm and is nearly as accurate as a modern 10-meter rifle. The Tyrolean style was perfected with this rifle and with the larger 8.15x46R schutzen rifle. 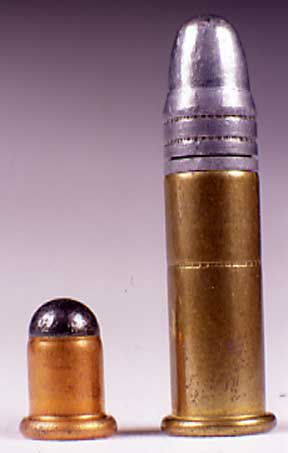 4mm zimmerstutzen cartridge on the left, .22 long rifle on the right.

An official zimmerstutzen target is similar to a 10-meter rifle target and only slightly larger. This sport is shot at 15 meters.

In the indoor match that zimmers shoot, the target is 15 meters away and the rifles have a trademark ultra-high cheekrest to bring the shooting eye up to a very large and adjustable rear aperture sight. The front sight is a pinhead-sized bead atop a fine wire. I’m showing you the pictures because this stuff is too difficult to envision. 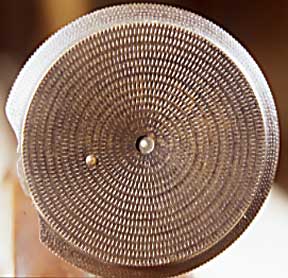 This zimmer rear aperture sight disk has 12 adjustable holes for different lighting conditions. It measures about 2″ across. 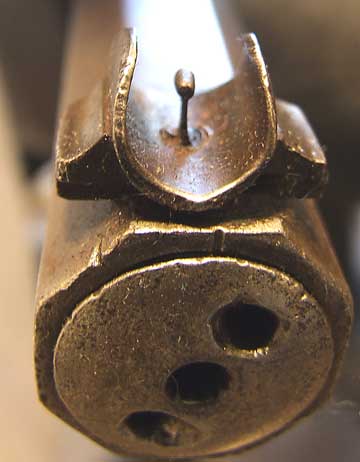 The front sight is a fine bead atop a thin post. For scale, the hole in the center of the muzzle is smaller than a .177 pellet!

As I examined Wayne’s rifle, I found ample evidence that it was tuned recently. It fires with a dead-calm thunk. The trigger is adjusted a might too heavy for me, and Wayne mentioned a grinding feeling when returning the barrel after cocking. I now know that it’s the cocking plate or shoe sliding over the compressed mainspring. It’s perfectly normal.

This is going to be a fun project. It will resemble the R1 tune I did during the 13-part spring-gun tune series, but there are some differences to show, as well. Sit back and grab your popcorn, boys and girls. We’re in for a treat!