Today, we’ll test the accuracy of this BSF rifle-pistol.

I decided on a 10-yard indoor test. I used a rest, resting my forearms on a bag and holding the pistol with two hands just in front of the bag. The hold was steady, but the post-and-bead front sight made it difficult to acquire a precise picture. Posts and beads are better for hunting or shooting cans and are not well-suited to holding at arms-length.

Surprise!
When I was testing the Air Venturi Avenger 1100 for yesterday’s blog, I read in the owner’s manual that they recommended using a Crosman 850 pellet trap for the rifle. I wrote a whole paragraph of criticism about that, because I felt the trap was built too light for such a powerful rifle; but my wife, who is both my editor and my conscience, called me on it. So, we went to the garage, and I shot a Crosman Premier 10.5-grain Premier into the trap from a foot away. I felt certain the pellet would deeply dent the steel backplate, but it didn’t even make a mark. So, we erased the entire paragraph, and on this day I used the same trap for the BSF S20 Match. It’s a fairly quiet trap and I envision using it a lot more in the future.

RWS Basic
I’m running short of RWS Hobbys, so I used RWS Basic pellets to sight in. Because this is a new pistol that I haven’t shot much, the first two shots were at 20 feet. They were high, so I cranked the elevation down several clicks and backed up to 10 yards. Still high at that distance, so I dropped the sight many more clicks and also put in some correction to the right. Now, the pellets were impacting at the right height but still too far to the left. 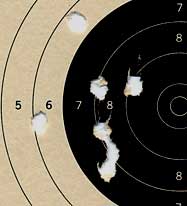 Then, I looked at the front sight. It was way over to the right in its dovetail, which of course threw the shots to the left. So I tapped it back to center and continued the test. After all this shooting, I was becoming aware that my prediction of a difficult-shooting gun, due to the high line of the piston, was true. The best group I could get with Basics was 1.5″ for 6 (I lost count). That’s a good BB-gun group, but hardly a target pellet pistol group. I decided to switch to RWS Meisterkugeln.

RWS Meisterkugeln
Meisterkugeln pellets were packed with this pistol when I bought it. I tried them, but they’re oxidizing fast and fit the gun too tightly. I tried some cleaner pellets and got about the same results as with Basics. Given the price difference, I’d stick with the Basics. 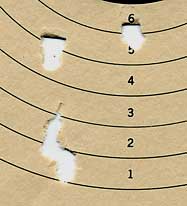 Five Meisterkugeln group about the same as the Basics.

By this point, I was starting to wonder if I would ever shoot a decent group with this pistol. I liked the light trigger that didn’t pull me off-target despite the shaky grip, but those post-and-bead sights were less than desirable.

Air Arms to the rescue!
Finally, I tried some Air Arms domed pellets. I think they are made by JSB. They gave me a group just slightly larger than a half-inch, which is what I expect from a gun like this at 10 yards. They also fit the bore much better than the Basics or the Meisters. 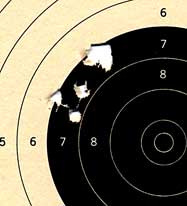 Now, that’s a group. But see how it’s still to the left? The sights need more adjustment.

What do I think?
My initial lukewarm reaction to this pistol the first time I saw one in Germany in the mid-1970s was right on the mark (in many ways). It isn’t the pellet pistol for me. However, I was wrong on a couple of accounts. First, the trigger is much lighter than I thought it would be and second, the gun cocks smoother and shoots smoother than I thought. I like the Beeman P1 much better.