I received this question from Jacob this past week.

I have a question about the relationship of power to accuracy. Consider the Daisy 953 with about 500 fps and the Gamo Nitro 17 with about 900 fps. The Daisy shoots much smaller groups at close ranges. Since the Gamo will shoot a much straighter trajectory, will there be a distance at which the accuracies of the two guns become equal and then from longer distances the Gamo will be more accurate? Or will the Daisy always be more accurate regardless of range? I used these two guns as examples, but would like to know if the answer would apply to other air rifles as well.

The ballistic cone
Ballistic projectiles travel in an arc; that, we all understand. The arc a projectile follows is actually a drop from the instant the projectile leaves the muzzle. At that point, all the “push” ends and gravity takes over. Where the projectile strikes the earth depends on its velocity, which starts diminishing at the muzzle, too. The angle of the bore to the plane of the earth is another factor that determines where the projectile lands. Also, bullets radiate from the straight-line trajectory in all directions, landing in a circular pattern–a so-called cone of fire.

Farther than you think!
Several years ago, the U.S. Army used millimeter-wave radar to track the flight of various black powder bullets to settle an age-old argument. Some said that if a bullet leaves the muzzle at 1,200 f.p.s., there is no way it could travel as far as a mile (1,760 yards) before striking the earth. In fact, those bullets were monitored by radar and traveled anywhere from 2,800 yards to 3,900 yards before striking the earth when their bores were inclined 30 degrees above the horizon upon firing. That test settled the argument of how far bullets can go, but it overlooked all the other things a bullet does while in flight.

Pellets don’t travel as far because of their high aerodynamic drag. But they do travel 400-500 yards.

Instability
A bullet or pellet spirals around its own center of mass as it flies. The direction of spin determines the direction of the spiral. If the bullet or pellet is made very uniform, this spiral may be very small. So small that it isn’t readily apparent for a long distance from the muzzle. However at some point in its flight, the bullet will begin to spiral as a result of destabilizing. Here’s an interesting fact. If the range at which the bullet performs (such as the distance to the target) is shorter than the range at which it destabilizes, that bullet (or pellet) will be accurate! If, however, the range to the target is farther than where the bullet destabilizes, it’ll be inaccurate.

More instability
An unstable bullet or pellet may also yaw in flight. I see this all the time in my testing. A yaw is when the axis of the pellet is not parallel to the line of flight. It is seen in targets as an oval hole. Like a spinning top, the yaw will sometimes correct itself and the bullet/pellet will become stable again. There is far more chance for a pellet to stabilize than a bullet, because a pellet has high drag that tends to stabilize it all the time.

Keyhole
The extreme yaw condition is called a keyhole, and represents the bullet passing through the target sideways. I have seen that with pellets a few times, but I can’t lay my hands on any pictures right now. However, during some testing of a reduced power load in my trapdoor Springfield .45-70, I captured a perfect keyhole at 50 yards. The bullet is tumbling end over end in flight, and the farther it gets from the muzzle, the less likely it will land near any other bullets fired from the same rifle. 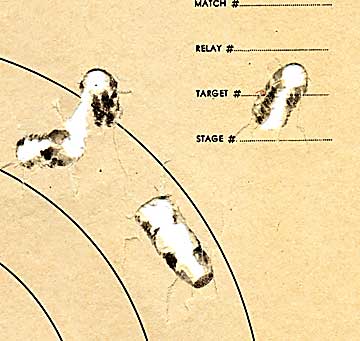 Four bullets from a .45-70 rifle landed in this pattern, several inches up and right from the aim point at 50 yards. Three of the bullets were yawing badly, but the fourth one was a perfect keyhole.

So your question boils down to two things. First, is the pellet accurate at any range? Because an inaccurate pellet is not going to suddenly reverse its tendency in flight and become accurate. That is what the term ballistic means: a projectile that is unguided during its flight.

The second part of the question is this: the farther you go from the muzzle, the more likely it becomes that the pellet will destabilize. So, your Daisy 953, which is such a tackdriver at 10 yards, may not be able to stay on paper at 100 yards. Your Gamo Nitro that can’t keep up with the 953 at 10 yards may be able to shoot a 12″ group at 100 yards. So, the answer is “yes,” there is a point at which the Nitro becomes more accurate than the 953 simply because of its greater velocity.

The magic range may not be 100 yards. I just used that distance to make a point. What if the real distance at which the Nitro passes the 953 for accuracy is 157 yards? Then, it would make no practical difference to you, because you’re never going to intentionally shoot either rifle that far.

Jacob, I saved the best for last. Is it your Nitro that is less accurate, or could it be a flaw in your hold that renders the rifle less accurate? Breakbarrel spring-piston airguns are the absolute most difficult shooting implements to master, while a single-stroke pneumatic like your 953 is one of the easiest. I haven’t tested the Nitro, but I have tested the Gamo Whisper, whose barrel should be very similar to the Nitro. I got many groups well under a half-inch at 25 yards. Can your 953 do as well? 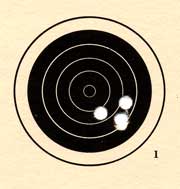