More than a decade ago, I saw a curious rifle at the Little Rock Airgun Expo. It looked something like a Beeman R1 but was quite a bit larger. When the seller told me that it was a handmade, one-of-a-kind rifle that was designed to be a more powerful R1, I couldn’t resist buying it. I had just published the R1 book, and here was a great follow-on story that needed to be told. 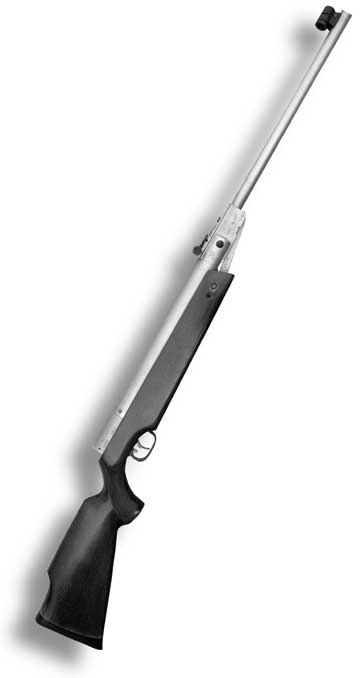 This curious springer is a monster.

Steel dreams
The inventor of this rifle, Steve Vissage, had seen the Beeman R1 and wanted a rifle that would put a .22 pellet into the supersonic realm. That was quite a goal for a spring-piston gun of the early 1980s, and it still hasn’t been reached today by any except a few PCPs. Steve thought the best approach was to increase the diameter of the piston and to increase the length of the stroke – some of the same topics we frequently discuss on this blog.

Now I’ll tell you why I am making this report. A number of our new readers are asking the same questions that Steve Vissage asked back in 1981. What does it take to get more power from a spring-piston air rifle? Back in 1982, the R1 was the most powerful spring-piston gun in the world. At 940 f.p.s. in .177, it offered velocity undreamed of 5 years earlier.

When the R1 came out, Robert Beeman wrote in his catalog that it took more than just a powerful mainspring to boost power in a springer. But, because those catalogs are now collector’s items, a lot of newer airgunners haven’t had the opportunity to read them. Many who might have read them don’t believe what Beeman said. What Steve Vissage did is what many of you think should be possible today, and I want to share my observations on that topic.

Steel dreams become real things!
Vissage built three rifles, of which mine was the first. Let me explain what’s so different about talking about airguns and actually building them. When guys start discussing airguns, anything seems possible; but, whenever Vissage made a decision, it got locked into steel…not easily changed. Even if he did make some changes, there was still a cost involved for the original decision that was not followed. Steel dreams cost more and take longer than daydreams. If you don’t understand what I’m driving at, you will by the time this report is finished. 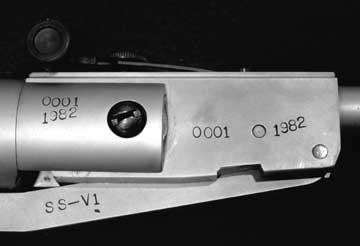 The date of manufacture and serial number are stamped on many exterior parts. SS stands for supersonic and V1 stands for Vissage model 1. 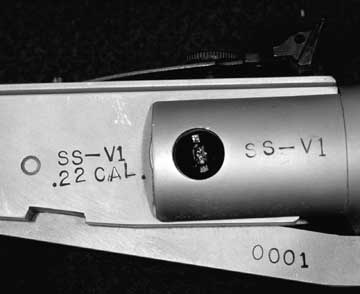 Both sides of the baseblock and spring tube are marked similarly.

Let’s look at this rifle
A stock R1 weighs 8.9 lbs., give or take. Many new airgunners feel it’s far too heavy, and they’re also impressed by it’s sheer size. The Vissage rifle weighs 11 lbs. It’s also longer than the R1, but I don’t seem to have recorded the length. The barrel came from an Anschutz target rifle; and, since Anschutz doesn’t make target air rifles in .22 caliber, I think that means it’s a .22 rimfire barrel. So, accuracy was out the window, because .22 rimfire bores are several thousandths larger than air rifle bores, and don’t fit pellets very well.

The spring tube, end cap, baseblock and cocking link are all custom-made parts. Steve told me he reckoned he put $600-700 1980’s dollars into making this one rifle. The wood stock came from an HW80. It was opened up to receive the 40-thousandths-larger spring tube. The forward stock screws are very close to the end of the forearm. Look closely at the first photo, and you’ll see they had to be moved forward almost an inch. 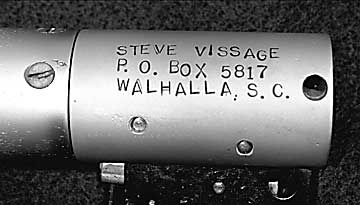 Just so there is no doubt who made the gun, Steve put his address on the end cap. He later moved from that address. See that flathead screw ahead of the end cap? That’s how the end cap is held to the spring tube.

The sights are stock Weihrauch items, the same as come on an R1. There is no provision for mounting a scope. The entire rifle is plated with Armaloy, a tough material used on tactical handguns. It is said to resist wear and to be self-lubricating.

The trigger is a Rekord, which was very popular back in the 1980s. Vissage would have been able to get one easily, since they had been on the HW35 for at least 20 years at that time. This is a good place to reflect that he used the factory trigger and sights instead of inventing his own. By this point in the project, he’d sunk a lot of money into this rifle, and inventing a whole new trigger would have cost him more than all he had spent to this point. Don’t forget that all the internal parts – the piston and mainspring, for instance, have to be made from scratch, because the entire rifle has different dimensions than a standard R1.

Speaking of different dimensions, how does Vissage get a stock Rekord trigger to line up with the piston hook if all the internal dimensions are different? Details like that are always overlooked when guys talk about airguns; but, when you actually build one, you want to cock it! 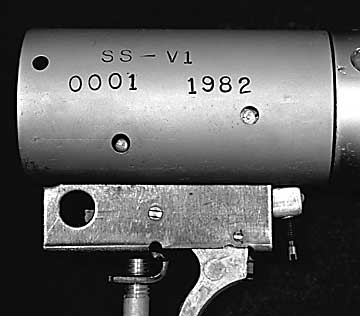 Here is what happens when dimensions change. The Rekord trigger had to be suspended at a different point inside the end cap in order to align with the piston hook. See the empty hole at the top left? That’s where the safety button is supposed to go if this were an R1, but ooops – it doesn’t contact the trigger because the end cap is larger than an R1 cap. Look at the picture before this and see the other side of the cap. No safety!

I disassembled this rifle to examine the innards. I also tested it before and after disassembly. Next time, we’ll look deeper into the Vissage SS-1. 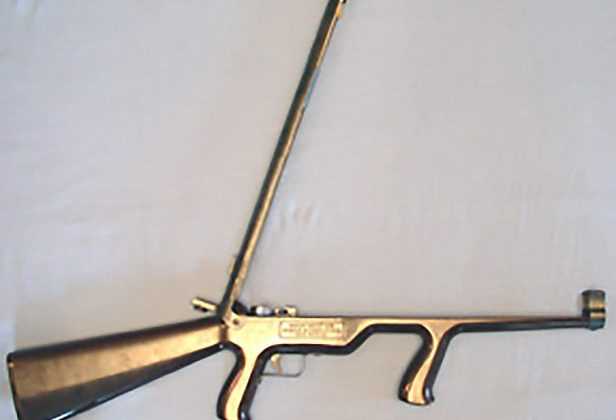