This 3-part blog is a reprint of my article in Airgun Revue #4.

With the current fascination for antique big bore airguns, hardly a thought is ever given to the equally old hand pumps used to fill them. Yet, without those pumps, the big bores could not have existed.

In the scant airgun literature that exists, you can read a few accounts of the performance of the old guns. In doing so, you’ll encounter two very different viewpoints. The first are reports of people who have actually handled and fired vintage big bores. They describe how they performed and give estimates of power and accuracy that seem quite modest.

Then there are other articles written mostly from secondhand information. These are much more effusive in their descriptions of the performance of ancient air arms. What firsthand information they do provide is accompanied by very little hard technical data. Instead, they’re full of subjective descriptions of what it feels like (or must have felt like) to shoot the old guns–guns that the authors may have never actually seen! That got me wondering.

The Barnes outside lock rifle.

Knifemaker and airgunsmith Gary Barnes is the one who really started me wondering. I saw the big bores he was making and listened to him talk about their actual performance in relation to the embellished tales he had read, until I, too, began to suspect much of what had been written. The outside lock rifle he made in 1998 seems to indicate a remarkable level of performance with very little air pressure. Yet, when the wick is turned up in the form of more stored air pressure, the performance goes down. It seems there’s a specific window of good performance for every airgun, on either side of which lie negative returns.

If the guns of the past were so narrowly regulated by design, then their air pumps had to get them only into that optimum range. Greater pressure did not equal greater power; it actually upset a delicate balance of related components the guns need to perform at their best. So, when this relationship is understood, the performance of the antique pumps can provide clues as to the performance of the guns they serviced. 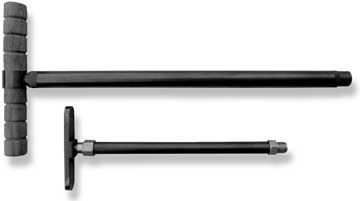 Two of the vintage air pumps made by Dennis Quackenbush. The larger one would be useful for rifles and shotguns. The smaller one would be for air canes. Not only is the size related to the amount of reservoir volume to be filled, the fit of the pump in the case with the rest of the gun and tools must be considered. Because of that, the handles and foot stands are made to be removed for easier storage.

I’ve seen vintage air pumps many times as parts of cased sets, but I never paid much attention to their construction. The assumption was that if anyone wants to charge an old gun today, they’ll use CO2, which gets them up to as high as 900 to 1,000 psi effortlessly. Or, they could fill from a scuba tank or a modern high-pressure manual air pump like the Swedish Axsor. The antique hand pumps are just for show, aren’t they? Perhaps not.

If we can establish the performance parameters of vintage hand pumps, then we’ll also know the range of air pressures within which vintage big bores had to operate. When that’s known, their power outputs can be calculated. Not exactly, perhaps, but it’s certainly possible to estimate the ranges of power within which the guns must be performing.

There are several good reports on vintage airgun power outputs. But, woven in with them are the other reports that lack validity. These are the exaggerated stories that many people, including myself, have tended to believe and to repeat because they are the more spectacular accounts. With them go proclamations of accuracy and of killing power at extreme distances, all based on these dubious and unsubstantiated claims.

Before we proceed, let’s look at another fantastic tale from the world of firearms to illustrate what can happen when facts are based on spectacular accounts. Legendary border patrolman and writer Bill Jordan was reported to have killed a criminal with a shotgun at a range of 100 yards. He was shooting 000 buckshot (.36 caliber shot), and one pellet was supposed to have hit the man in the head, if the story is true. Lethal, yes! Probable? No! No one doubts that the shot was anything but the wildest of flukes. Even if the report is not correct, the fact that it COULD happen is all that’s important for this comparison.

If we accept an account like this, someone who read and believed it might well write another article about how such a shot was possible at even 125 yards. Then, some other writer would key on that and, before long, there would be claims of lethality at 200 yards for a shotgun blast. It’s pretty ridiculous when examined this way, but that’s what’s been happening with big bore airguns for several decades, and no one has so much as raised an eyebrow. Until now.

In 1998 came the science of splatology. From Barnes’ careful observations of recovered lead balls fired from big bores, a correlation was made between the size and shape of the recovered “splat” and the velocity at which it impacted. It’s possible to determine impact velocity to within a narrow margin this way. The splats from the past, recorded by cameras and drawings, can thus be examined to reveal their impact velocity. It is, therefore, possible to deduce how fast those old guns were actually shooting–which turns out to be not as fast as some modern reports have said.

Still, splatology is not 100 percent conclusive proof. Balls going faster than 700 f.p.s. disintegrate entirely, leaving no record. There couldn’t be any historic proof of those. Since a splat represents only the impact velocity, we still have to calculate how fast the projectile was going when it left the muzzle. But, a gun that shoots in the 550 f.p.s. realm is probably not likely to also throw one over 1,000 f.p.s. Although we’ve heard claims of very high velocities for modern big bores, we have yet to actually see one demonstrated. In our experience, it’s been impossible, thus far, to reach such a speed with the big bore guns made today, to say nothing of the less efficient guns of centuries past. [Note: That statement was true when I originally wrote it, but modern big bores have progressed to the point that a few of them can now exceed 1,000 f.p.s. with light projectiles such as round balls.] By knowing the air pressure limits of vintage hand pumps, we have a big clue to the performance parameters of vintage big bores.*
———-
*Note: In the Fall of 1998, I fired a special Quackenbush Brigand rifle in .375 caliber that the maker had designed to operate on 3,000 psi instead of the normal air/CO2 combination valve that’s usually in the gun. The combination valve operates best at pressures around 1,200 to 1,400 psi because it’s set up to work with either air or CO2 gas; the 3,000 psi valve is optimized to that pressure alone. The 3,000 psi gun shot an 83-grain round lead ball through the chronograph at 893 f.p.s., making it the fastest big bore projectile yet tested by The Airgun Letter. This gun got four usable shots on a full air charge, but the first was the fastest and each successive shot was slower.
———-
One thing we know is that a pneumatic gun that functions well at one pressure level will most likely not do well at another. Therefore, if a big bore shoots 550 f.p.s. on a charge of 450 psi, it is unlikely to work at all when pressurized to 1,000 psi. We’ve known this about modern multi-pump pneumatics for many years. If you over-pump them, their velocity decreases until finally they cease to function at all. That’s the point called valve lock. Why wouldn’t the older pneumatics, different in caliber only, work the same way?

In fact, there’s no other way they can work! All pneumatics that use an impact-type valve will exhibit the same characteristics of an optimum performance window within a certain range of pressure. The window can be widened or even shifted by design, but there will always be an upper boundary. If there weren’t, the potential energy of a pneumatic airgun would approach infinity, and we know that it doesn’t. By knowing what air pressure was available to get behind the vintage big bore projectile, we can determine the energy window. And, we can find out the available air pressure by studying the pumps that created it. That’s the thinking that went into this test.

Quackenbush’s tests, methods and findings will be in future segments.