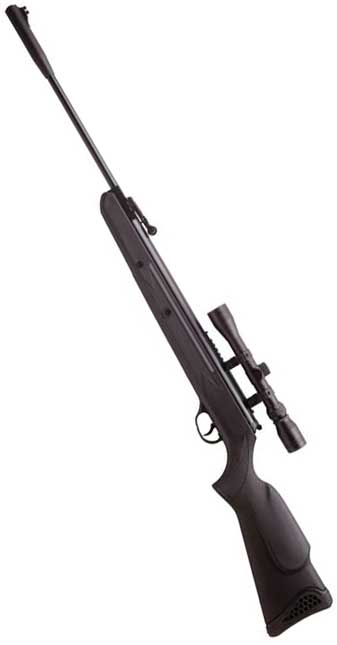 Walther’s Talon Magnum is the .177 version of the Falcon Hunter. This is a big air rifle!

I promised this report to John, who has waited patiently for it. The Walther Talon Magnum is a breakbarrel single-shot pellet rifle made by Hatsan for Umarex. It comes with a black synthetic stock, scope and mounts. There are open sights and the scope is not mounted on the rifle when you open the box, but the scope-mounting video will help you with that simple task.

The rifle comes only in .177 caliber, but for those wanting a .22 or .25, the Walther Falcon Hunter is the same rifle with a different stock. The rifle also has open sights for those who want them. They’re a fiberoptic bead in front and a fully adjustable rear notch. The muzzle is enclosed in a synthetic brake that holds the front sight base.

The metal is finished a deep black, and the polish is better than matte. So, there won’t be any reflections to disturb those covert hunting shots.

A big, heavy rifle
This is a very large air rifle. The photos don’t convey that, but compared to this 49″ airgun, a standard Winchester model 70 centerfire feels like a carbine. It’s also decidedly muzzle-heavy. I think the .177 caliber has a lot to do with that, because most of the weight is in the barrel. The rifle isn’t heavy for a magnum springer at 8.2 lbs., but the muzzle-heaviness will make many shooters think it is.

The power is rated at 1,200 f.p.s. for standard lead pellets and 1,400 for non-lead lighweights. I’ll test that for you. The barrel is very stiff to open, reminding me of a Webley Patriot. You have to slap the muzzle to break it open. The rifle cocks with 50 lbs. of effort, though that could decrease a little with break-in. The bottom line here is that this is a large, heavy and powerful air rifle. Don’t get it for plinking because you aren’t going to want to shoot it more than 50 shots at any one time. Hunters will find this is a great way to nail quarry with a minimum cost.

Scope
With the rifle comes a 3-9×32 scope in rings, so it’s ready to mount. Just attach the ring bases to the proprietary scope base on the rifle and slide everything back till it touches the scope stop plate. Tighten the two screws (one on each ring base) and you’re done. The optics seem bright enough for general hunting and the eyepiece is adjustable for focus. Each ring’s cap has two screws, so I’ll watch to see if they can hold the scope under recoil. The scope base looks similar to a Picatinny because of the cross slots cut into it, but it’s really a standard 11mm dovetail. The slots seem to have no purpose for any scope mounts we know about.

Another reason this Talon Magnum reminds me of the Falcon Hunter is that the stock adjusts for length of pull in the same way–by installing or removing up to three shim spacers between the stock and the rubber recoil pad. The rifle comes with the shims out, and the length of pull is still 15″ so most of us won’t be needing them. For those who ask, the stock sounds hollow.

Trigger and safety
The two-stage trigger is long and stiff, and the owner’s manual doesn’t list any adjustments. On the box it’s listed as a single-stage trigger, but the one I’m testing most assuredly is not. There’s a single screw on the plastic trigger blade, but I doubt it affects the pull. It may adjust the first stage travel, only. I’ll weigh the trigger-pull during the velocity testing, but right now it feels like at least 7 lbs. The safety engages automatically on cocking and can be reset at any time with the rifle cocked or not. Because of the safety’s central location, the rifle can be considered ambidextrous, even though the cheekrest is only on the left side of the butt.

Well, that’s my initial assessment. It’s a big gun and a near-copy of the Walther Falcon Hunter but in .177 caliber. The velocity should be right up there with the other superguns if it comes near the advertised numbers. 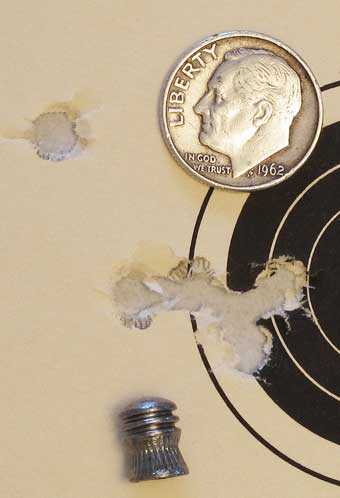