Sorry for the size of this image, but I wanted to show you the whole rifle, and Blogger only allows photo widths of 5 inches. The butt contains the reservoir and is covered with leather.

In 1998, Gary Barnes built a rifle that I consider to be his masterpiece. It more or less conforms to traditional lines, through it has an extra-long 16.5-inch pull that makes it suitable for a giant. The gun is unusual in many ways. First, it is .25 caliber. While not completely unknown in antiquity, .25 is really a modern airgun caliber.

Next, the 32.75-inch barrel is rifled. Rifled outside lock guns are unheard of because they date to as early as the 1600s and not much later than the mid-1700s before rifling was in widespread use.

Other curious features are the sights. They’re made from mammoth ivory, a material sometimes used by knifemakers as a way around the elephant ivory that’s illegal today. This prehistoric ivory sometimes resembles modern ivory with the patina of age.

Finally, the rifle is made as a breechloader. That is almost unheard of in an outside lock, though not entirely. 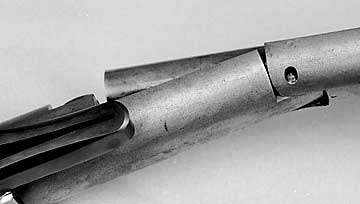 The rifle breaks open slightly for loading. This is most unusual in an antique pneumatic gun. 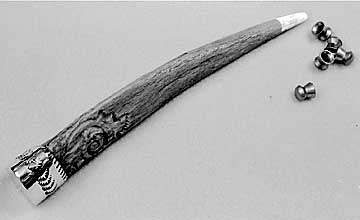 This antler loader is for seating pellets deep in the breech, which increases the muzzle velocity.

What do we mean by OUTSIDE lock?
What is an outside lock? Well it’s a novel way of getting around physical laws without building an air rifle with an outlandishly large action. The action parts are attached to the outside of the sideplate instead of the inside. That allows the mainspring to stick forward into space and therefore be several times longer than the receiver had room. And that means it can be more powerful–which is one key to the outside lock’s performance. 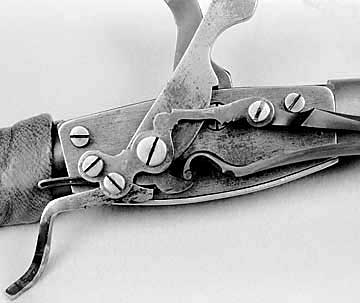 The outside lock has most of its action parts attached to the outside of the plate. The hammer spring can be larger than the receiver because it doesn’t have to fit inside.

A customer of Barnes had sent him a genuine outside lock from the early 1700s and asked for some repairs. While he had the lock, he disassembled it and looked at every part, then made the lock and gun you see here. The lock he made looks remarkably similar to the original, and it functions exactly the same. Barnes made all the parts, including every screw that you see here. He made a trigger similar to the original but with one difference. His trigger ends in the center of the action and is usable by shooters who are either right- or left-handed. 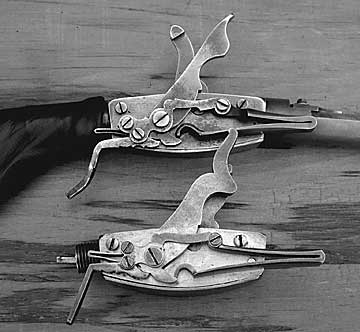 Barnes lock at top and antique lock below. Barnes made the spring for the antique.

How does it work?
The outside lock is a marvel of engineering, because it is NOT a knock-open valve. Instead, it’s the first true timed-release valve. The valve isn’t knocked open. Instead, it’s pushed open by a lever. That’s why the mainspring has to be big and strong to overpower the valve and open it against the stored pressure. And this timing of the valve is another key to the gun’s performance.

How are valves “timed”?
Once the valve opens, the hammer holds it open as it swings to its stop through an arc. If you look at the Barnes lock in the above picture of the two locks, you’ll see a cam on top of the lever that pushes on the valve. It’s at the top of the lever, which is located to the left of the hammer. When the hammer is cocked, it passes that cammed lever and swings way back to the left edge of the action. When the gun fires, the hammer passes the other lever, hitting that cam and pushing it forward at the top, which pushes it backwards at the bottom. The hammer and lever remain in contact for a long time as their two cams slide over each other, which holds the valve open longer. This is how they achieved the timing of the valve. 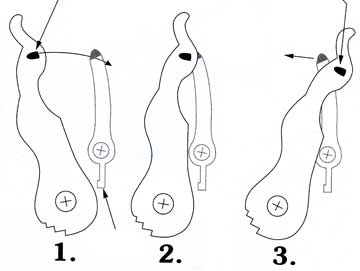 This drawing is scanned from Airgun Revue #4. The descriptions were removed because they’re unreadable at this size and resolution, but you can see how the hammer interacts with the valve striker through the cams.

And what does a timed lock do?
The power of this gun depends on the shape of the two cams, the power of the hammer spring, the power of the valve-return spring, the size of the valve port, the air pressure inside the reservoir and the length of the barrel. The longer the valve is held open, the more pressurized air can flow out. The longer the barrel on the gun, the more time it has to act on the pellet. So, a timed lock also needs a long barrel to achieve its full potential.

Barnes’ first hammer spring developed about 22 foot-pounds on a 600 psi fill, but it broke during operation. The second spring he made produced over 28 foot-pounds on a fill of 800 psi. That’s right–just 800 psi and I got 12 shots from the gun. The first three were above 700 f.p.s. and the 12th shot was 462 f.p.s., when shooting a 20-grain Diana Magnum. A Beeman Kodiak would have almost certainly pushed the rifle over 30 foot-pounds, but the Diana Mags were the most accurate. Here are the exact velocities of all 12 shots:


The first shot illustrates a little bit of initial valve lock. My guess is the fill pressure is really best around 700 psi, but adding the extra 100 psi is not that harmful. However, it looks to me like another 100 psi would drop the velocity quite a bit, because that first shot is significantly lower than the second one. In the time before chronographs, the shooter relied on his ear and on bullet performance to indicate when to stop. Based on that, 10-12 shots seemed to be the limit.

Accuracy was about 3/4″ for five shots at 10 meters. That was measured edge to edge across the widest dimension of the group. Because this is .25 caliber, it’s actually a half-inch group. Not too shabby for open sights and a barrel that’s nearly a yard long!

Alas, I no longer own the outside lock rifle. It was sold several years ago and is now in another collector’s care. But that’s how the world works. You never really own the vintage airguns you have. They’re just yours for a time and then they pass on to someone else. If you think about it, that’s how you came to acquire them in the first place.

122 thoughts on “An outside-lock rifle by Gary Barnes”