Kevin prompted this report by asking me about the Diana 27 I bought at this year’s Roanoke airgun show. Then he surprised me with the gift of a very nice peep sight made for the Diana model 75. It also works great on the little Diana 27 rifles, and Kevin wanted me to see that so he sent one.

What I plan to do is test my new .177-caliber model 27 and then install the peep sight and test that for you. Unfortunately, the 27 I got in Roanoke doesn’t have a rear sight base for this sight; I’ll install it on my other 27, which is a Hy-Score 807 in .22 caliber. For those who are fascinated by coincidences, the .22 caliber Hy-Score was purchased from the same dealer from whom I bought the .177 15 years before. It was made in August of 1967, while the new gun was made in March of that same year. Spooky, no?

The new Diana came without a rear sight rail. The presence of the Diana logo indicates there never was one.

Many Diana 27 rifles, including this Hy-Score 807, have a rear rail like this for mounting a peep sight. 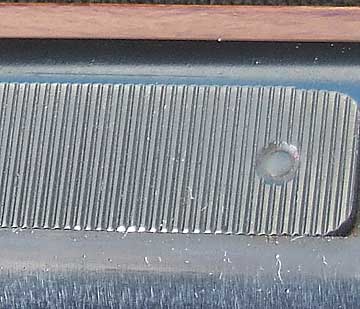 The top of the rail is textured with cross-slots that assist the peep sight by providing a solid anchoring surface.

I’ll test the new rifle before lubricating the piston seal and again after a good oil soak. The oil will be applied through the air transfer port, so no disassembly is required.

However, I thought this new rifle would also be the perfect one to tune for you so I can show you the inside parts and how I tune it. That’s coming some time in the future.

Before oiling
But right now, we’ll test the rifle as I got it. The 27 is a low-powered spring-piston breakbarrel that was considered medium-powered in its day. The rifle had a long life, starting in 1910 and running off and on until 1986. However, all those model 27 rifles were not the same model. In fact, you can’t really call them the same gun. The model 27 we’re examining here started some time after World War II and finished in ’86. That said, the final pre-war 27 rifle was quite similar in appearance to the post-war gun and differed only in the trigger and a few small details. This particular rifle I’m testing was manufactured in March 1967 (from the date stamp on the spring tube).

They fit the breech of this rifle very tight and had to be pushed into the bore with a Bic pen to avoid damage to the skirt when the breech was closed. If I didn’t seat them, the velocity was 278 f.p.s. Seated they had a velocity of 444, but it was sharply bi-modal with the lower average at 436 and the high at 460. There was no shot recorded between the velocities of 439 f.p.s. and 456 f.p.s. I suspect an extremely dry piston and breech seal.

RWS Superdome
The RWS Superdome was not bi-modal and averaged 412 f.p.s. The high was 425 and the low was 395. They were also tight and seated in the bore with the pen.

I had the feeling after this testing that the leather piston seal and breech seal need copious amounts of oil. So, I oiled the piston seal through the transfer port and the breech seal topically. I’ll repeat this process one more time and give the rifle a couple days to soak it all in. Then, I expect the results to be faster and more uniform.